Seed for this plant was labeled Silene hookeri. I have seedlings growing in different parts of the garden from dappled shade to full sun. The growth habit is very similar in all conditions. They have yet to produce a strong flush of flowers in the spring, but tend to flower all season with a few flowers here and there. Any ideas if it is a Silene?

Identification of a gentian

I need help to identify this gentian. The best suggestion so far is G. algida var/ssp purdomii.

Can anyone ID this plant 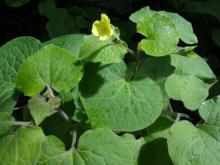 I received these seeds as Arabis blepharophylla from the 2014-15 seed ex. This is the plant blooming for the first time, and I don't think it is A.b.  It started as a 4" rosette in its first season. Flowering stems are about 8-10".

This looks like an arabis, but I am not sure which one.  Thanks for any help.

I requested & received Hylomecon japonica from the 2014-15 SeedEx. It germinated rapidly & I have planted some of the seedlings, which sized up quickly in the garden. The leaves however don't seem to match those of photos on the internet. I have attached 2 photos of the leaves that I took today (21 May 2015). Am I just being nervous & should wait for a more mature plant? Seeds were donated by #73-J.Roantree,Callon, Co. Kilkennt, Ireland. Any help would be appreciated..paul schneider- Eastern Sun Studio & Gardens, Portland, TN 37148

I grew a plant from seed that was supposed to be Alyssum aizoides, but looks more like an Erysimum. Does anyone recognize it? An interesting feature is that the stems were nodding when the plant was in bud (see third photo), but became straight as it came into bloom.

The plant is about a foot tall.

Incidentally, the plant in the foreground in the second and third photos is a definite Erysimum -- Erysimum pumilum, which I've had only a year but has been quite delightful.

Thanks for any help!

I sowed some 2013 seed of Gentiana acaulis.  Most of the seedlings are something other than that.  Can anyone help me out with an ID?

I'm growing above ID'ed aconitum from seed from the 12-13 nargs seedex.  Since that expedition was in 1996, I'm wondering if the plant has since been identified and if anyone can advise me on whom in the AGS I might contact for information.

A friend who has since passed away grew this Amelanchier from seed so I don't know the species and hope some one here can help identify it,