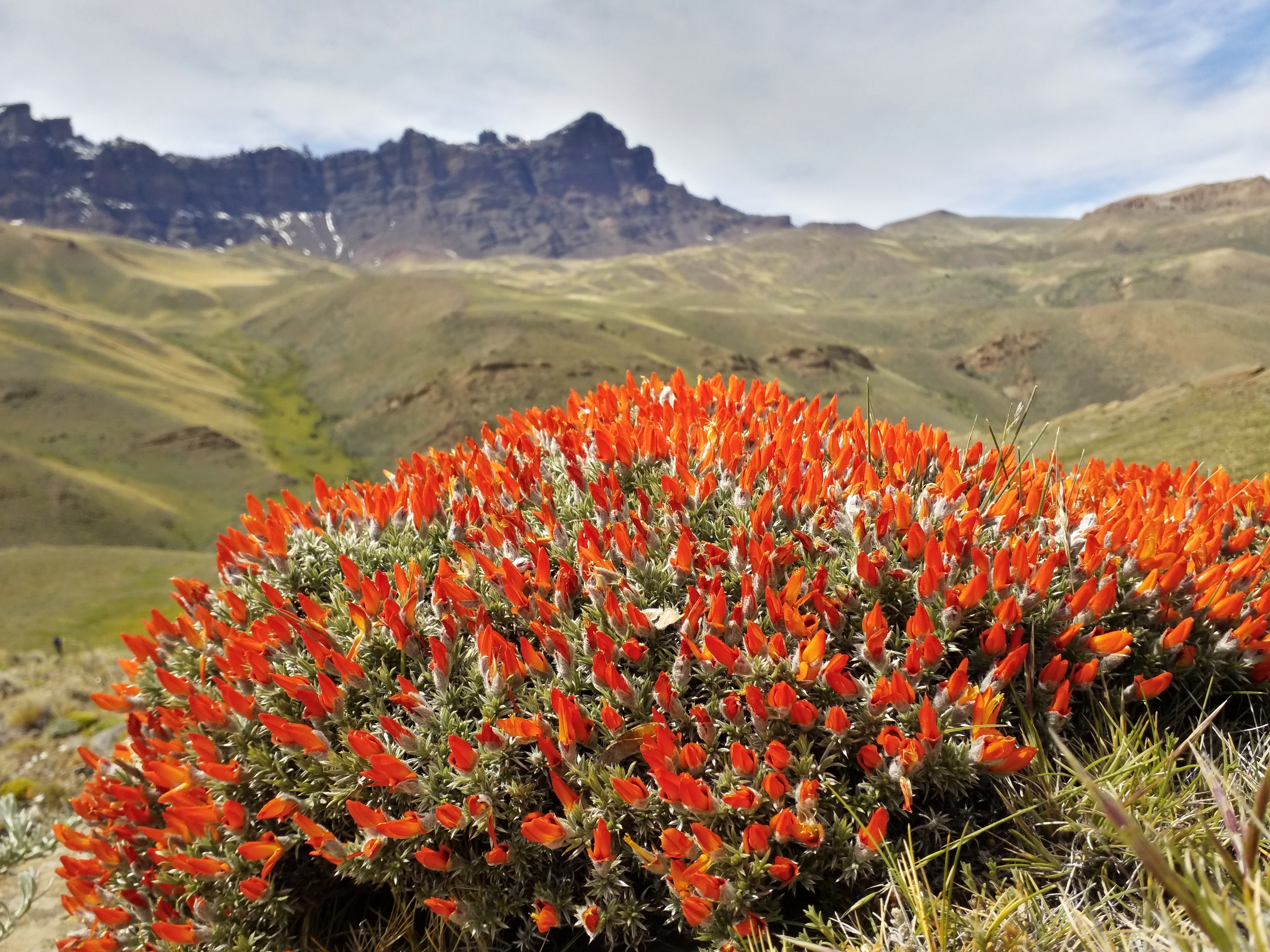 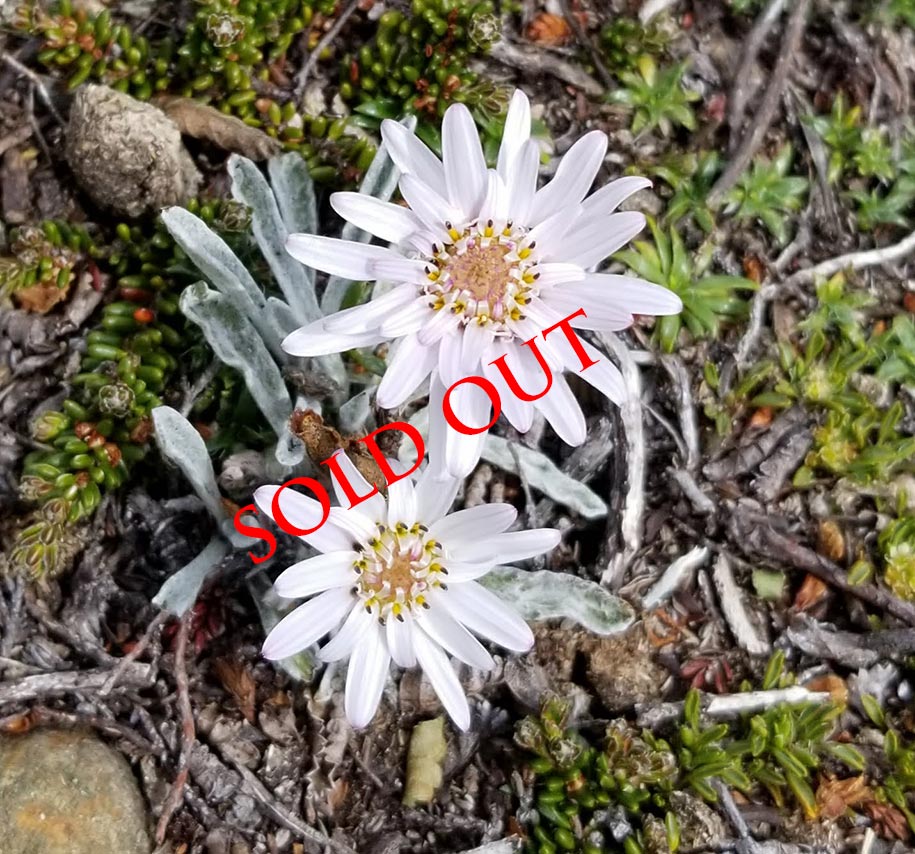 The NARGS Tours and Adventures Committee has planned two tours to the Patagonia region of Argentina in early December 2021. The 12-day main tour will start in the Northern Lakes District of Patagonia (sometimes referred to as the Switzerland of South America), travel north by van through alpine and forest venues, and then to the grasslands and semi-desert at the northern end of Patagonia. Immediately following the main tour, we have planned a 5-day extension to the area around El Calafate in the Southern Lakes District. The timing of each tour was selected to coincide with expected bloom times. For both tours, well-known botanist and author Marcela Ferreyra will be our guide. Requests to participate in the extension only will be considered if space is available. A more detailed itinerary is provided below. 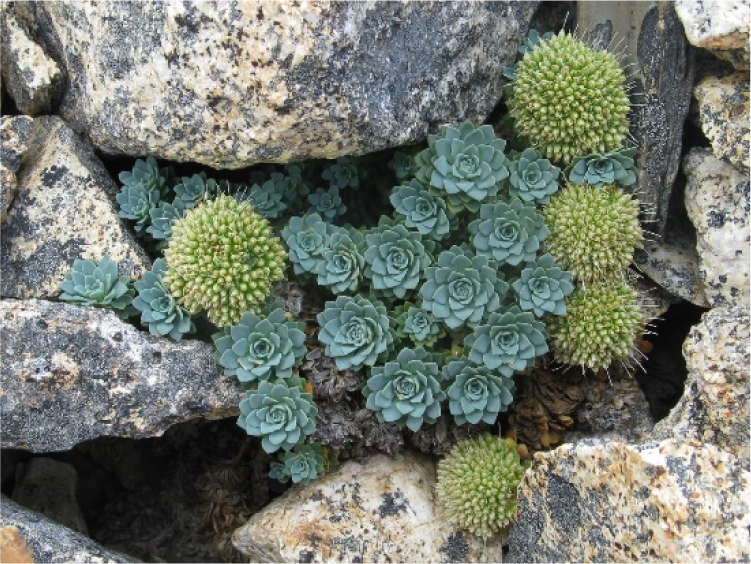 We will depart Buenos Aires at mid-day for Bariloche. Upon arrival, we will meet up with any participants who have arrived earlier and then drive to a scenic vista. There we will to view the beauty of the magnificent Andean Range to the west, Lake Nahuel Huapi and the city of Bariloche on its south shore, and the impact of changes in precipitation on the forests to the west and the steppe in the east. After settling into our hotel (we will be here for the next 3 nights), we will have dinner together at a local restaurant.

Cerro Catedral is a beautiful granite mountain best known as the largest ski center in South America. Its name comes from its many peaks that look like spires. We will travel by bus to Catedral Village and then ascend by cabin and chair lift to approximately 6500 feet above sea level (fasl). The view from the summit is magnificent. The mountain is rich in alpines and most of them should be in bloom at this time of the year. Some of the species we hope to see include Callianthemoides semiverticillata, Viola sacculus, V.petraea, Oxalis erythrorhiza, Ourisiafragans, Oreopolus glacialis, and several species of Nassauvia and Senecio. We will return to Bariloche around 6 pm, and should have time to visit downtown before or after dinner.

We will travel to the east through the lower mountains and steppe habitats. The steppe is one of the richest ecosystems in Patagonia. We will travel to Pilcaniyeu, a small town at 60 km from Bariloche. Close to Bariloche, we will stop to look for several orchid species including Chloraea alpina, C. magellanica and C. cylindrostachya, and a large Oxalis adenophylla population. Later on, we will stop in different places to look for Austrocactus patagonicus, Junellia succulentifolia, J. tonini, J. patagonica, J. tridactylites, Viola escondidiensis, Senna arnothiana, and many more.

We will leave Bariloche after breakfast. We will initially be on Route 237 as it runs along the Limay River and crosses the Enchanted Valley, a very attractive volcanic rock formation with rare formations caused by the rain and wind erosion. Later on, we will turn onto unpaved Route 63 until it connects with 7 Lakes Route, which we will follow to San Martín de Los Andes. Along the way, we will stop to look for Viola volcanica, Nastanthus scapigerus, Oxalis nahuelhuapiensis, Pozoa volcanica, Mutisia spinosa, and more. We will also travel through a xeric forest dominated by Austrocedrus chilensis and later on through a forest with various Nothofagus species. We will have dinner and spend the night in San Martin de Los Andes.

We will leave San Martin after breakfast, heading to Junín de Los Andes, Aluminé, and Villa Pehuenia. On the way, we cross the steppe following the Aluminé River (famous for kayaking and fishing). Along the way we will be looking for Calceolaria polyrrhiza, Alstroemeria aurea, Glandularia araucana, and Rhodophiala mendocina. In the afternoon, we will arrive in Villa Pehuenia, a small village near Aluminé Lake and a very rare, relictual forest of Araucaria araucana. The scenery is breathtaking, with mountains, crystalline waters, lot of islands and peninsulas and, of course, the monkey puzzle tree that gives a mysterious and sacred feel to the landscape. We will spend two nights in Villa Pehuenia. 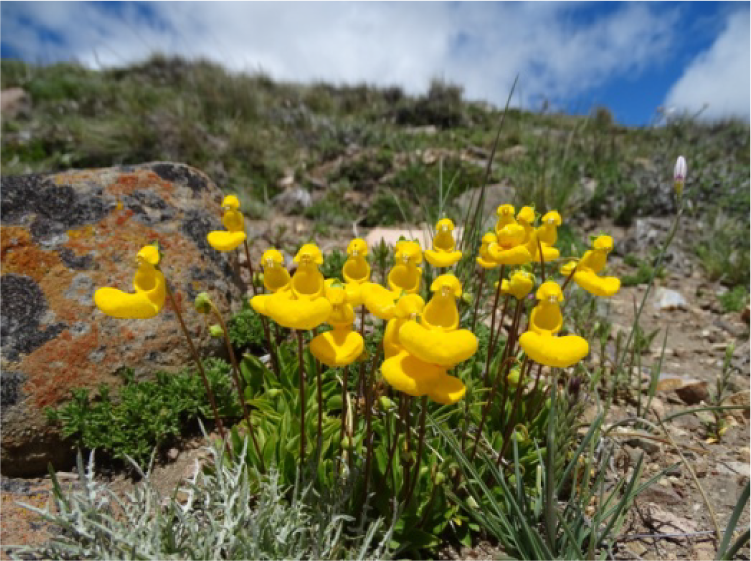 After breakfast we will travel to Batea Mahuida Mountain and a small ski center that belongs to a Mapuche community, one of the aboriginal groups that live in this area. We will stay on the bus until we reach a crater at approximately 5600 fasl that hosts a small lake. From here we can enjoy beautiful views of the surroundings and several volcanoes in Argentina and Chile. The mountain hosts a large population of Viola cotyledon that grows among Rhodophiala andicola, Oxalis adenophylla, Tristagma patagonica, Chloraea alpina, C. magellanica, and many more. It is an easy to walk to the very top at about 6200 fasl, but climbing is not necessary because the most of the species are around the lake.

After breakfast we leave Villa Pehuenia for Zapala. We will follow a gravel mountain route that runs along the Litrán River with Araucaria araucana scattered everywhere. The route rises to close to 6000 fasl at Primeros Pinos Pass where we will stop to see Viola coronifera, one of the rarest and most spectacular rosulate violas. Other special species for this day include Viola trochlearis, V.pachysoma, Calandrinia affinis, Jaborosa volckmanii, several species of Junellia, and many more. In the afternoon we will travel on to Zapala, where we will spend one night.

We will spend the morning in Laguna Blanca National Park. The park protects a good example of Patagonian Steppe with many interesting plants, including Pterocactus araucanus and P. australis, Viola tectiflora, Pantacantha ameghinoi (the only species in this genus), Gutierrezia spathulata, Maihuenia patagonica, and many species of Junellia that convert the steppe into a blue and violet showy field. We will then continue toward Caviahue, with stops to see native Bougainvillea spinosa and Argylia robusta among other species generally found in montaine areas (scrub forests) rather than steppe, and to see Argyllia bustillosii and Tropaeolum incisum. In the afternoon we arrive to Caviahue, a very attractive village by Caviahue Lake at the base of mighty Copahue Volcano, with Araucaria trees growing on very showy basaltic outcrops. We will be in Caviahue for two nights. 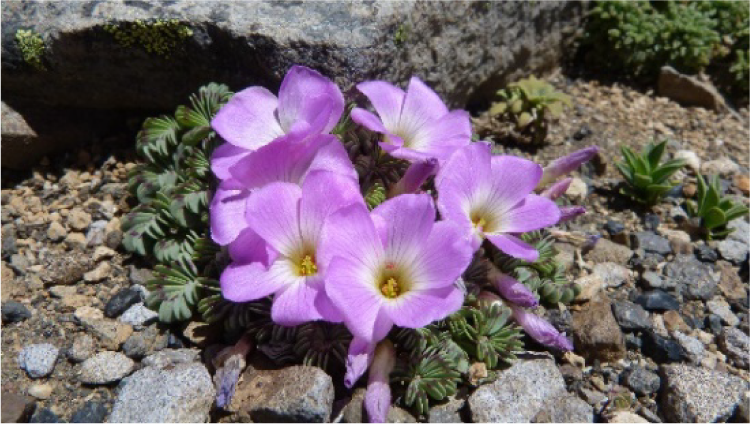 After breakfast we will travel to Copahue at approximately 6500 fasl, a very small village among many fumaroles, thermal ponds, and a strong smell of sulfur. We will explore the old crater, which is now an incredible flower garden. Here we will find a dense population of Viola pachysoma (ex Viola copahuensis) the same color as the rocks. Other species that should be in bloom include Viola cotyledon, Olsynium frigidum, Ourisia ruelloides, Calandrinia colchahuensis, Gamocarpha dentata, Euphrasia meaiantha, and E. chrysantha among a long list of beauties. In the early afternoon we will return to near Caviahue to visit some waterfalls among basaltic outcrops and look for Maihuenia poeppigii, Grindelia prunelloides, and many more.

After breakfast we will leave Caviahue via a mountain road for Chos Malal. The first stop will be at Salto del Agrio, a waterfall that emerges from a wall made by volcanic columns. Agrio means “bitter” because of the water’s sulfur content and very low pH. Due to the water’s high content of sulfur and other minerals, the river bank is red and yellow. Many interesting species grow here, including Rhodophiala araucana, Chuquiraga oppositifolia, and Ephedra ochreata. Later in the day, we will encounter the Neuquén River and will stop to look for Mutisia retrorsa, Senecio gilliesii, Viola tectiflora, Junellia pathulata, Retanilla patagonica, and more. Chos Malal is a small and quiet city with water canals that irrigate the street trees, small squares, and a peaceful atmosphere. We will be here for two nights.

After breakfast we wiil head to Tromen Provincial Reserve with the Tromen Volcano at the center. The gravel route runs along a very special vegetation habitat known as the Payunia region. It is a very dry and warm region with a very xeric conditions. On the way to Tromen's base, we cross a colder steppe and may explore some alpine zones in Cerro Wayle (optional). On the way, we will pass a very large wetland and Tromen Lake, a paradise for birdwatchers. Cerro Wayle is not very difficult to climb but requires some effort. There we can find Viola atropurpurea among other true alpines. Otherwise, there are many interesting species at the slope of Tromen Volcano to enjoy, such as Oxalis compacta, Olsynium chrysocromun, Perezia recurvata, Montiopsis gayana, several species of Nassauvia and Junellia, and the endangered Adesmia pinnifolia, among 5 a long list of species. We will have a farewell dinner in Chos Malal.

We will follow the very scenic Route 40 to Zapala. Depending on time and conditions, we may botanize along the route. The flight back to Buenos Aires would be in the late afternoon or early evening.

Marcela Ferreyra will be our tour guide. Camino Abierto will handle tour logistics (ground transportation, lodging, food, etc.). If you would like to spend additional time in Argentina either before or after the NARGS tour or extension, personnel at Camino Abierto can provide assistance.

Bariloche is very cosmopolitan but most of the towns that we will be staying in have limited dining options and locals speak little if any English. Breakfast will be provided at the hotel and generally consists of eggs, ham, cereals, cheese, toasted bread, jam, local pastries, fruit juice, milk, tea, and coffee. For days we are in the field, we will provide a box lunch and snacks using locally available foods. We will also provide water during all meals and field activities. Dinners are the main meal of the day for most Patagonians and typically consist of lamb, pasta, casseroles, soup, and salad. To accommodate personal dietary preferences, we will give each participant a list of dinner options for review and selection prior to arrival. Beverages other than water can be purchased by participants based on local availability. The main tour includes 11 breakfasts and lunches (every day except Day 1) and 11 dinners (all except Day 12). The extension includes 5 breakfasts (every day), 4 lunches (every day except Day 1), and 4 dinners (every day except Day 5).

Air-conditioned vans or minibuses driven by professional drivers will be used during the tour and extension.

Be prepared for variable conditions. Bring clothes that can be layered, good rain and wind clothing, and a day pack, as well as mountain shoes, a sunhat that ties, sunscreen and bug repellant.

The best reference is Flowers of the Patagonian Mountains by Martin Sheader available through the Alpine Garden Society and other places. Its companion volume Patagonian Mountain Flower Holidays by Hilary Little is also great for anyone wanting to explore this plantsman’s paradise.

Both tours have been designed to accommodate up to 20 people. Pricing is based on a minimum of 15 people on the main tour and 10 people on the extension. If these minimums are not met, NARGS may need to cancel the tour or increase the price.

It is expected that tour participants will be flying into Argentina from various locations and that some may want to spend additional time in South America as part of their trip. To meet everyone’s needs, tour participants are responsible for booking their own international flights into and out of Buenos Aires. Domestic flights to or from Bariloche, Neuquén, and El Calafate will be coordinated by Camino Abierto. However, it is not currently possible to confirm flight schedules or prices for travel in November and December 2021. A supplemental cost will be provided to tour participants in early 2021 for the flights (in 2019, the cost for coach class tickets would be approximately $200 for the main tour and $250 for the extension).

What is not included in the tour and extension prices:

• Beverages except those listed above during meals and field activities

• Tips for guides and drivers

• Services not detailed in the program