Plant of the Month for February 2018 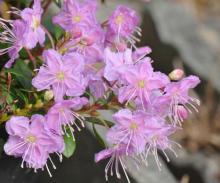 Kalmiopsis is a small evergreen shrub, up to 30 cm high, within the Ericaceae.  The small round to spoon-shaped leaves are aromatic when rubbed.  Terminal clusters of pink, saucer-like flowers are produced from late spring to early summer.  Each flower had 10 exerted stamens.

There are two species: K. leachiana is endemic to a narrow range in the Siskiyou Mountains of SW Oregon, growing in an altitudinal rage of 2000-4000 feet and an area of 727 square kilometres. It was discovered in 1930 by Lilli Leach. The native region of this plant is now within a wilderness reserve. This region is characterized by plenty of winter rain but relatively dry summers. Some 2500 mm of annual precipitation fall in the region.  The underlying rock is serpentine, high in heavy metals, iron and magnesium.  Generally serpentine soils are toxic to most plants.  Those plants that grow on serpentine are often endemics with a special tolerance to such soils.

Kalmiopsis fragrans is endemic to the Cascades of Oregon, growing under similar environmental conditions.

In cultivation are two forms of Kalmiopsis called 'Umpqua Form' and 'Le Piniec'.  While first released as cultivars of K. leachiana, they are now considered to be selections K. fragrans.

Kalmiopsis grows under similar conditions as Rhododendrons and azaleas. The soil should be humus-rich but well-drained, with a pH range of 5-6.  In cooler coastal areas it may be grown in full sun but in hotter areas, afternoon shade is suggested.

In cultivation, from late March to early June.

Surface sow seed in a peaty-sandy mix.  They germinate best under cooler conditions, 6-12 C.  Warm temperatures may inhibit germination. Seedlings are very sensitive to drying out so cover the pots in cellophane until the seedlings show 2-3 true-leaves.

Semi-ripe cuttings may be taken in mid-summer and rooted in a peaty-sandy mix.