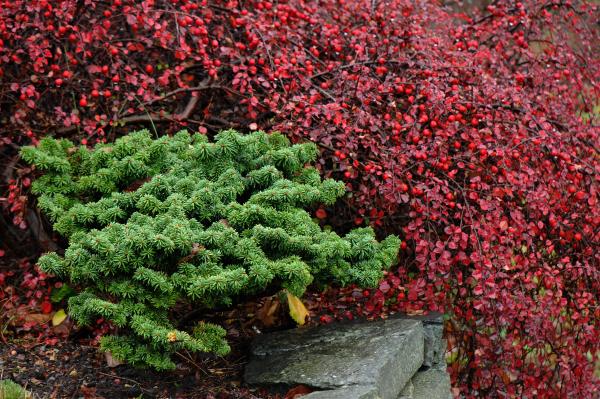 Dwarf balsam fir, Abies balsamea 'Nana' is also known in the literature as forma hudsonia or 'Hudsonia'. It was originally discovered in the White Mountains of New Hampshire. It forms a dwarf globular to mounding conifer 30-60 cm high. Plants have aromatic, flattened dark green needles that are whitened below. The branches are short and compact.

This conifer prefers full sun in the north but appreciated afternoon shade in the south.  In fact, it is not tolerant to high heat and humidity so is not suggested south of zone 6. It performs best in zones 2-4, making it a highly desirable dwarf conifer for northern rock gardeners. The soil should be acidic, highly organic and moisture-retentive.

This dwarf conifer is generally propagated by semi-hardwood cuttings taken in late autumn and rooted under mist.