When we think of the Western U.S. we picture two plant comunities most often. The Deserts of the south west with their abundance of cacti and the sage brush steppe dominated by shrubs. On the sunny, wind swept high deserts of the western US vast stretches of territory are dominated by shrub comunities. Artemisia, Purshia, Cercocarpus, Ephedra, Prunus, Chrysothamnus and Mahonia are very obvious and omnipresent. These and many others hidden throughout these steppes work well in a dryland rock garden as backdrops to the flowering herbaceous plants we cherish.There is one shrub that occupies a prominted position in my garden. The gray aromatic mound, with dazzling blue/purple flower spikes in my garden is Salvia dorrii ssp.dorrii var.dorrii. There are two subspecies in the S. dorii complex Salvia dorrii ssp. mearnsii from Arizona and Salvia dorrii ssp.dorii over the western states of AZ, CA, ID, NV, OR, UT, WA. Subspecies "dorrii ssp. dorrii" is further divided into four varieties based upon growth habit.

var.carnosa , a large-leaved erect shrub of Washington and Idaho southward through Oregon into extreme north-central California:

var.dorrii, a small-leaved erect shrub of southern Oregon and Idaho southward through the Great Basin of Nevada and western Utah to southeastern California and northern Arizona:

var.pilosa, a small-leaved erect shrub differing from var.dorrii by pilose bracts and calyx, in southern California and western Arizona with disjunct populations in the Lahontan Basin of northwestern Nevada and northeastern California;

var.clokeyi, a low mat-forming subshrub of the high mountains of Clark Co., 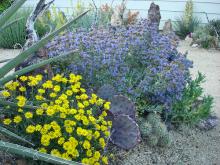 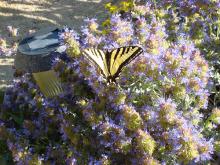 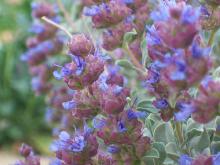 I have a couple of Salvias but this one I am certain is impossible to grow for me! (We have another species of swallowtail too!).

John, good featured plant exposé, this brings memories rushing back to when I lived in Washington State, and I made a series of trips in search of Allium robinsonii found only in Washington and Oregon along the Columbia River, although the species is considered extirpated from Oregon.  I finally found this rare species near Vantage Washington, among sandy "benches" along the Columbia River, narrow low flat areas just above the high water level.  What does this have to do with Salvia dorrii you ask?  Most often this delightful little flesh-pink Allium with dark stamens was growing at the base of Salvia dorrii shrubs, I suppose getting a modicum of shade.  The area in which these plants grew was pure sand.

There were a number of fine plants in these communities, but what struck me most were the beautiful small shrubs of Salvia dorrii, and as your photos show, the flowers and the colorful bracts make this one of the finest Salvia species.  No doubt is hardy, but I wonder how it would do here on the East Coast if planted in very sandy soil.  So, from your description of the subspecies and varieties, those plants I saw in eastern Washington would be var.carnosa?  Judging from the number of varieties and subspecies, and variety of habitats it grows in, surely there are growable forms.  This one moves up on my "must get" list of plants to try.

I've been entertaining a hybridization effort with Salvia, to produce hardier ones than the many tender ones currently being created.  As an aside, I'm also thinking about working on fall blooming hardy Salvia, such as the glutinous-leaved yellow-flowered S. koyumae, which can also be grown and flowered in shade.

I admit it... we grow no Salvia species.... shock, horror!  :oThis Salvia dorrii piqued my interest, though and so I consulted the Royal Horticultural Society Plantfinder: http://apps.rhs.org.uk/rhsplantfinder/     to see if it might be available in the UK  It IS listed.... but only from one nursery... and that is in France!This may be of interest to European and UK members.... so here are the details: www.senteursduquercy.comFrederic Prevot Mas de FraysseEscampsLot46230France Salvia, Iris, Phlomis and drought tolerant plants. French National Collection of Salviaspecies.

In the following link, there's a changing slide show, just sit back and enjoy the beautiful photos of Salvia dorrii. Some of the really dwarf mat-forming forms looks fantastic.

Do you really grow no Salvia?  Wow!  :o  I grow something like 30 different ones I would guess, although those aren't all different species.  The S. microphylla and greggii types do brilliantly here, as do so many other species.  I don't know S. dorrii though, as I have never seen it before now.  Thanks for introducing it John.

I have grown several forms of Salvia dorrii (although I have yet to get my hands on those tiny mat forming ones): they are all worth having, although they only bloom once--usually quite early in April and May. Salvia dorrii is obviously closely allied to Salvia pachyphylla, which is really a superior garden plant because the flowers last for months (at leat in Colorado): in my attached Blog you can see a specimen growing in a public park in Lakewood, Colorado that was still in full bloom in the autumn.

I think it is still worth growing dorrii since it blooms so well so early: hybrids between the two species are likely to be spectacular.

But Ian/Maggi,what do you use with roast pork! :o

We also have a fair number of salvias but less than we could grow in Melbourne because of our frosts.We had Salvia pachyphylla until the recent unseasonable rain :'( and will have to replace it and get S. dorrii from seed as it's allowed into Australia.cheersfermi

But Ian/Maggi,what do you use with roast pork! :o

Cohan, Salvia pachyphylla, grown from Alplains seed, has made it through a winter here out in our boulevard (not the friendliest of conditions, with salt, ice, gravel from the road getting dumped on it).  It sent up a few additional stems last summer from what seems to be some sort of a spreading root system.  It's nothing to write home about yet - no blooms yet, but maybe some day? I know that the local experts are growing other hardy, shrubby salvias here... I was very kindly given this cute little Salvia chamaedryoides last summer (thanks, Stephanie!!  :) :)) 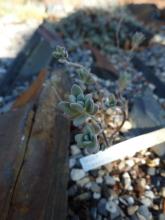 I'm very interested in seeing how both of these come through the winter.