With fair use I scanned and posted a photo of Aquilegia saximontana in Rare Plants of Colorado, Second Edition, 1997, The Colorado Native Plant Society.  It's a good characteristic image, showing the divergent spurs.

Also with fair use, I scanned and posted a drawing of Aquilegia saximontana from Land Above the Trees, A Guide to American Alpine Tundra, by Anne Zwinger and Beatrice Willard, 1972.  I still consider this one of the very best books on alpine plant habitats, the pages filled with charming pencil drawings that capture the essence of the subject plant, often showing the flowers and plant in various stages of articulation.  Here again we see acute sepals, narrowish cup, and divergent spurs.

The 3rd fair use scan is Aquilegia saximontana from Rocky Mountain Alpines, part of Alpines '86, Second Interim International Rock Garden Conference, June 28 to July 2, 1986; Boulder, Colorado.  Sorry, the scan is a bit pixelated, but the image was rather small, but you can still see the unique shape of the flower and spurs.

The last scan of Aquilegia saximontana is from a past NARGS Rock Garden Quarterly, Volume 66 Number 3 Summer 2008, the photo courtesy of Denver Botanic Garden.  Here again we see the light airy foliage and flowers with divergent spurs. 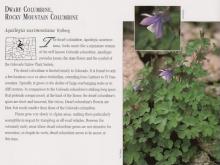 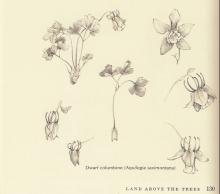 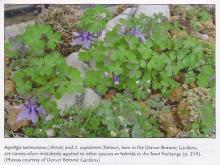 Other photos found of Aquilegia saximontana.

In the following link, way down near the bottom is a photo of what the grower purports to be the true A. saximontana.  Translating the page with Google Translate (which does a poor job), what I can make out is that this grower tried for 10 years to get the true plant, but in the photo he shows in 2006, believes he has the true plant.  I agree it looks right.  To facility finding the photo easier, in fair use I uploaded a screen capture of that image (see 1st photo).  Here again we see the distinctly divergent spurs, mild hook to the spurs, and acute sepals.http://sainohana.cocolog-nifty.com/blog/2006/05/index.html

Found a second page by the same Japanese grower in 2010, can't be sure from the translation, but I believe these pictures taken 4 years later might be seedling plants, and thus subject to hybridization.  Again, in fair use, I put two screen captures of the flowers side by side for comparison, showing characteristic spurs.http://ptech.cocolog-nifty.com/blog/2010/04/post-3eb0.html So, what misidentified Aquilegias go around as A. saximontana, and have done so for decades.  Most often the imposter is a dwarf form the highly variable A. flabellata var. pumila (often with variable names, aka 'Nana', yezoense, akitensis, akitensis kurilensis, flabellata v. kurilensis, etc.).  This Asian species has tubby rotund flowers, the sepals often incurved, having a rather different look to the flowers altogether.  Other impostors include the blue European A. pyrenaica ssp. pyrenaica, or the blue and white Spanish form A. pyrenaica subsp. discolor.

To help Aquilegia fans understand key characteristics of true Aquilegia saximontana, I prepared a composite image showing 4 flowers of A. saximontana, 3 from the US Forest Service showing 3 different plants, and the 4th from Panayoti Kelaidis' plant. Key things to note: the sepals of A. saximontana are acute (rather than widely rounded as in A. flabellata pumila/nana), and at full anthesis, the sepals spread widely.  The lamina ends (or "cup") of A. saximontana is narrowish, not rotund as in A. flabellata pumila/nana.  The spurs on A. saximontana splay outwards (divergent) then bend inwards at the tip... the hook at the end is mild, whereas in A. f. pumila/nana the spurs are straight and parallel or angle inwards (converging) and are strongly coiled at the apices to almost 360 degrees.  I also put together two detail drawings from the aforementioned Gentes Herbarum publication showing the differences in spurs; slight bend in saximontana, strong coil bend in flabellata.  Not specifically described, but true in every image I've seen to date, with A. saximontana the blue color blends diffusely to the cream or white cup, whereas in A. f. pumila/nana the color change occurs with sharp demarcation. 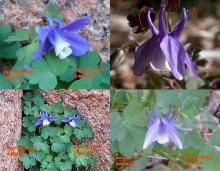 I read Barbara's short post on the ease of growing A. jonesii here in New England. I've been trying for 15 years to get one stinking bloom, and I have yet to even get one to survive more than one winter. I know that Harvey Wrightman has them blooming their little heads off after direct seeding them into a bed of tufa and crushed tufa, but so far he's the only person I know who's not growing them in the west who seems able to bloom them with regularity. Other than Barbara, of course. So if anyone out there can suggest a method for me, I'd greatly appreciate it. At this point it is the only Aquilegia I've been unable to grow successfully and flower.

Peter George, Petersham, MA (north central MA, close to the NH/VT borders), zones 5b and 6 around the property.

I read Barbara's short post on the ease of growing A. jonesii here in New England. I've been trying for 15 years to get one stinking bloom, and I have yet to even get one to survive more than one winter. I know that Harvey Wrightman has them blooming their little heads off after direct seeding them into a bed of tufa and crushed tufa, but so far he's the only person I know who's not growing them in the west who seems able to bloom them with regularity. Other than Barbara, of course. So if anyone out there can suggest a method for me, I'd greatly appreciate it. At this point it is the only Aquilegia I've been unable to grow successfully and flower.

Worth experimenting and taking the cue from Harvey, sow some seed in some of that nice tufa you have, sowing directly into some pockets drilled out and filled with some crushed tufa.  Barbara said she donated seed to NARGS this year, so it'll be available.  I won't get any because once again, I missed the seed donation deadline, so with seed exchange second pickings, I'm sure this treasure will be gone quickly in the first round.

I found an article about Aquilegia jonesii in an old ARGS Bulletin, I will post here as a pertinent addition to this discussion.

Hey rock-garden-Aquilegia fans, I chanced upon the following article in the Bulletin of the American Rock garden Society, Vol.49, No.1, Winter 1991, pp 60-65, entitled Variations in Aquilegia jonesii by Jerry DeSanto.  What strikes me about this article is how our notions of many plants are entrenched or locked down by a single impression, naturally Aquilegia jonesii is a deep blue-flowered species right?

This article helps illuminate some of the beautiful variability of this species.  It also describes the putative hybrid A. jonesii x flavescens (with photo too) and shows a gorgeous dwarf A. flavescens form.  The latter species, A. flavescens is one of the unsung gems of North American columbine; I've examined indescribably beautiful swarms growing on talus slopes in Washington State, the plants were covered with yellow to salmon colored blooms.  I remember thinking, why aren't rock gardeners clamoring for this species?  Often this is a taller plant, but the dwarf forms are to die for.

In fair use, I have scanned and reposted here. This post in reference to plants going around for decades as Aquilegia jonesii x saximontana, which by this point in time, are invariably hybrids between other species such as A. pyrenaica and nothing to do with the two original species.

There's an article about this hybrid cross published in the Bulletin of the American Rock Garden Society, Vol. 38, Summer 1980, N0.3, pp. 113-114, "A Dwarf Aquilegia Hybrid", by Trevor Cole, Ottawa Research Station, Agriculture Canada, Ottawa, Ontario.  In the article, Trevor reports on his experience growing seed of A. jonesii which had been collected on the Big Horn Mountains.  In the ensuring years growing and flowering A. jonesii, the only other columbine close by was A. saximontana, reported as 6' (2 m) away.  From seed harvested off his own A. jonesii plants and sown in January 1976, about 40 seedlings were grown on.  In the batch of seedlings, two different forms appeared. Most plants were typical in growth to saximontana, but 5 plants were characteristic of jonesii.  Almost all plants "bloomed profusely in the summer of 1977", and "seed was collected in quite large amounts and sent to the ARGS seed exchange listed as A. jonesii x saximontan".  So indeed, the cross did exist at one point in time.

Surely 33 years hence, with the genus Aquilegia's well known promiscuity, unless any of these hybrids were grown absolutely isolated, there is almost no chance that anything close to the unadulterated cross between the two species exists today. It is also important to note, that the seed that was initially distributed, was itself variable, from hybrid plants that already showed a couple different growth characteristics.

Almost everything bearing the name of this cross (and sometimes you can see it listed the other way around) look to be dwarf forms and/or hybrids of A. pyrenaica.

I have the pleasure to post some beautiful photos of Aquilegia saximontana taken by Jane Hendrix, of Breckenridge, Colorado, a purveyor and wonderful photographer of North American native flora, particularly Rocky Mountain alpines.  One can only imagine what it must be like to live and garden at 10,000' elevation, in such close proximity to an amazing alpine flora.  Her extensive photo albums in the following link show many wonderful Rocky Mountain wildflowers and alpines.  We hope to see Jane here on the NARGS Forum soon.http://www.picturetrail.com/hendrix

It is my privilege to show these photos that capture the unique essence and characteristic of the true A. saximontana.  Here again, what we see is the dwarf yet upright billowy foliage of the plant, and the small soft blue and white flared flowers with splayed (divergent) spurs. 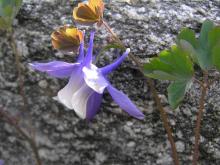 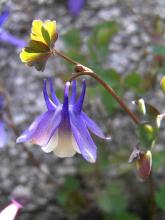 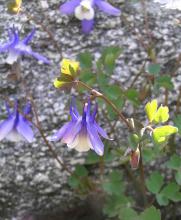 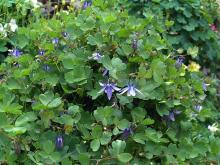 Following up on the previous post with lovely photos of A. saximontana by Jane Hendrix, Breckenridge, Colorado, USA, Jane has given me permission to post photos of a dwarf form of Aquilegia caerulea found locally among unnamed peaks that surround her 10,000' elevation home.  Rather than paraphrase Jane's description, she describes it well, so here it is:

"Every plant shown was grown from seed I collected at 11,600 feet in the boulder field on the slope of Peak 6 so they are not accidental hybrids.  To be certain this dwarf form [of A. caerulea] was genetically dwarf and not environmentally dwarf, I sited the plants in rich, moist soil.  They all grew lusher, fuller and taller than the ones in the wild but still would be classified as dwarf.  In one photo, you can see the plant's height in relation to the red Darwin tulips (the tulips get to about 20 inches tall in my garden).  The dwarf A. caerulea flowers are as large as the "regular" A. caerulea.  This particular group of seeds produced light blue and white blossoms but since collecting them, I have seen similar dwarf A. caerulea in a nearby rock field with the typical, deeper blue sepals.  When grown side-by-side with the common (pure) A. caerulea, they don't have a chance to hybridize because the dwarf form blooms much earlier than the other one and by the time the tall one has pollen, the little one is making seed."

Thanks Jane for allowing forumists to view this rarely seen variant of Colorado's most famous plant. Aquilegia caerulea var. alpina A. Nels. is a recognized variety, in ITIS, USDA, and in Flora of North America (FONA).  The problem is USDA reports var. alpina from Wyoming and Utah (not Colorado) and FONA reports var. alpina only occurring in Wyoming. Using the USDA species distribution, it would be conceivable this variety is also found in adjacent Colorado.http://plants.usda.gov/java/profile?symbol=AQCOAhttp://www.efloras.org/florataxon.aspx?flora_id=1&taxon_id=233500096

Tip: if searching for information or photos on the Colorado Columbine, use both alternate spellings; caerulea and coerulea.