I've noticed over the years that this is usually misnamed in a lot of collections. Since it is the Avatar (so to speak) of the Rocky Mountain Chapter (we all know the real thing!) I thought it would be good to post this picture that really shows the distinguishing characteristics. It is widely distributed, but never common, right at treeline on the mountains visible from the Denver area: a range of maybe 150 miles: on a clear day I feel as though I could pick it out from my front door...

It isn't the smallest, showiest or rarest columbine. But it may be the cutest!

I agree! What kind of rock is it? - a kind of limestone?

I like columbines, but I have never been a fan in as much as to know what the features are that tend to divide species.  So nothing jumps out at me as "distinguishing characteristics."  Is it the plant overall, or are there particulars?

First of all, yes! The stone is dolomitic limestone. Although in nature Aquilegia saximontana almost always grows on granite. But our granite has a lot of calcium in it. The picture was taken at Denver Botanic Gardens' rock alpine garden when I managed it (it's in very good hands now, I aver)....

Aquilegias are very distinctive in nature: species are hard to confuse with one another: our giant upfacing Colorado columbine (Aquilegia caerulea) is the parent of most of the showiest garden hybrids aside from the endless variations on the common, nodding European columbine (Aquilegia vulgaris): these aside, there are countless miniatures that are each distinct and superb. And by and large easily distinguishable: in the garden, it is true, they can hybridize and you can end up with a miserable muddle (and the occasional gem of a hybrid).

I can recognize Aquilegia saximontana instantly: the flowers are quite tiny (little more than an inch across) and always nodding on delicate stems--much smaller in bloom than many of the Eurasian "dwarfs" like Aquilegia pyreneica at one end or A. flabellata at the other end of the continent. Unlike these, A. saximontana blooms continuously (I have flowers all summer long--an endearing trait). The shape of the spurs and the way they emerge from the sepals in a distinctive shape is instantly recognizable. Columbines are the state flower of Colorado and almost sacred here...you do not dare criticize them for fear of imprisonment at the very least! They sell like hot cakes every spring at the local nurseries.

Are they as easy as other "akeleier" from seed?

Aquilegia saximontana is not only quick and easy from seed, it's long lived. I've had the same plants in a trough for ten or more years--a Methusalah for this relatively evanescent genus.l

I think I will try to get hold of some plants or seed!

Yes it's cute but I think Aquilegia jonesii is cuter and just as easy.  I have it in a trough and it keeps seeding itselfinto the surrounding gravel.  I have no other aquilegias on the eastern side of the house, and since it blooms a little earlyfor a columbine all my seedlings seem to be pure jonesii. Maybe not quite as alpine in character as if they were growing at 8000 feet, but very tiny, with very blue leaves and pure blue flowers.  I just sent a bunch of seed to the NARGS seed exchange.

If it's okay, I plan on piggybacking onto this important topic, and perhaps even hijack it a bit, to enlarge the topic to North American Aquilegia, but starting most importantly with the most misidentified columbine of all time, namely A. saximontana.  Panayoti's opening photo of this plant flowering at DBG shows the unique character of this delightful Colorado endemic species, dwarf but with light billowing leaflets and flowers that are instantly recognizable on account of the short spurs that ascend outwards first (divergent) and then tend to curl inwards at the apex.

I have started a lengthy posting on this very topic on the Scottish Rock Garden Forum; my inspiration: to show what A. saximontana looks like, to help mitigate the ubiquitous misidentifications, where the European A. pyrenaica or more likely the Asian A. flabellata var. pumila usurp the good name of saximontana.  In the process, I'll be showing and featuring related species, photos and links to the common misnomer species, and start exploring other North American Aquilegia, I believe this continent certainly has some of the best columbines.

To kick things off, here's a little nugget I scanned, from the late Linc Foster, with an essential line drawing by Timmy Foster exemplifying the essence of Aquilegia saximontana, a dwarf open spray of leaves and flowers with those spreading or divergent spurs.  This appeared in the Bulletin of the American Rock Garden Society, Vol. 38, Summer 1980, No.3, entitled "Aquilegia saximontana in Connecticut". 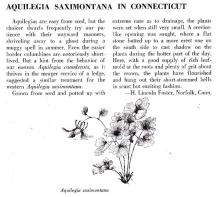 Yes it's cute but I think Aquilegia jonesii is cuter and just as easy.  I have it in a trough and it keeps seeding itselfinto the surrounding gravel.  I have no other aquilegias on the eastern side of the house, and since it blooms a little earlyfor a columbine all my seedlings seem to be pure jonesii. Maybe not quite as alpine in character as if they were growing at 8000 feet, but very tiny, with very blue leaves and pure blue flowers.  I just sent a bunch of seed to the NARGS seed exchange.

Barbara, do you have any photos of your A. jonesii, it's fantastic that you have it growing and seeding around, I'll look for it in the NARGS seedex.

Shown here are several photos illustrating two different plants of A. saximontana growing in Panayoti Kelaidis' troughs.  The closeup view shows the hooked spurs (uncommon for American blue species, but common enough for columbine species elsewhere in the world), the spurs splaying outwards (divergent) then curved in at the apex, the narrowish cup with diffuse color shift from blue to white or cream, and delicately flared petals at full anthesis.  Notice too, the small acute leaf dentations.

Also uploaded is a fine line drawing (scanned) of this species, and A. laramiensis (endemic to Wyoming).  The photos are from Gentes Herbarum, Aquilegia - The Cultivated and Wild Columbines, by Philip A. Munz, March 1946, Vol. VII, 150 pp.  Something to consider about line drawings in general, they are but one point in time for one particular selected plant, and as such, are not always fully indicative of all plant characteristics nor do they represent variability encompassed by the species.  Also note, both A. saximontana and laramiensis are reported to be 5-25 cm tall in the wild, so don't read more into the apparent size difference between the two plants shown in the line drawing.

US Forest Service page on 5 blue columbines, starting with A. saximontana.  Click each photo for an enlarged view.http://www.fs.fed.us/wildflowers/beauty/columbines/aquilegia_saximontana... 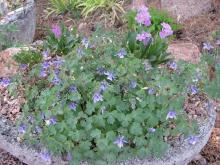 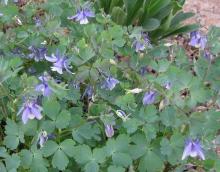 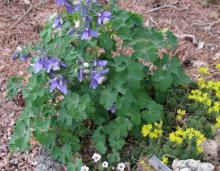 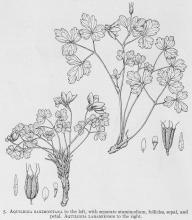