A few repeats, but they are all so comely this season that I snapped some photos.  Does anyone get Iris cristata seeding around much?  I rarely get seedlings, even with lots of seed-filled pods typically produced, but I hypothesize these largely get eaten, they seem a favorite of squirrels and chipmunks.  But a do have a few self-sown seedlings, here's one that is flowering for the first time, nothing special, just a nice light slate blue. 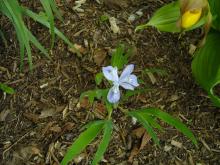 Two Iris cristata forms in opposing forms, both are the earliest cultivars to bloom.  The first set of photos is 'Sam's Mini', very low growing and neat, excellent low arching foliage, and highly floriferous.  A strong fast spreader too.  The second set of photos is 'Edgar Anderson', the relative GIANT form, also making fine foliage mats but much larger and taller, and floriferous with crystalline frilly-edged mid blue flowers.  Exploring cultivars such as these is a good reminder just how variable a plant species can be, and gardeners certainly do horticulture a service by recognizing these differences and embracing the more unique forms.  It is worth noting, all Iris cristata forms survived last year's record breaking drought without a scratch. 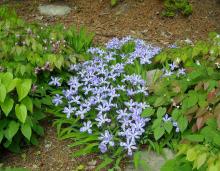 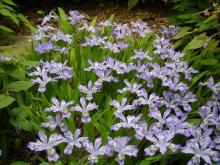 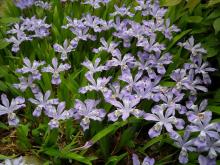 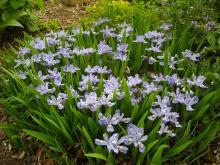 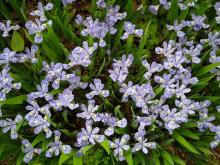 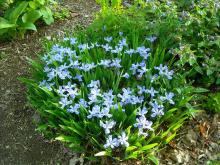 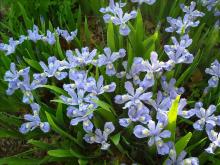 The flowering of Iris henryi (left) was somewhat ruined by extended periods of rain, and I missed much of the flowering while I was traveling, managed to get a snapshot one rain morning.  Same with yellow Iris minutoaurea (right).  This one is starting to flower less, I believe it needs to be divided and replanted to "refresh" the plants for better growth and flowering in  the future.  I. henryi is also earmarked for division. 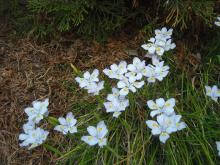 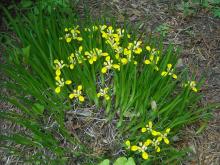 Looking around the garden recently, I noticed how different some of the leaf forms of Iris cristata can be.  In the photo on the left is I. cristata 'Shenandoah Sky', with fairly broad leaves with gracefully arching tips.  In the photo on the right, you can see 'Shenandoah Sky' on the left side of the photo, and in the center foreground is I. cristata 'Mountain Girl', with bold narrow-leaved sharp fans of foliage; quite a different look about it.  On the upper right is I. cristata 'Alba' with the more typical arching leaves. 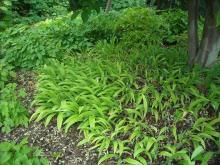 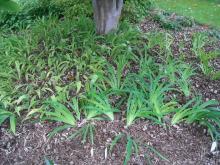 My original Iris odaesanensis has flowered poorly the last couple years, barely at all.  So I'm trying them in various spots in the garden to find a spot more to its liking.  In this view, is a seedling grown plant, which actually flowered this year (4 yrs from seed) with a couple white flowers.  I noticed that in late summer and fall, the rhizomes bulk up with lots of narrow blue-green fans and shoots... I think they take a while to become established. 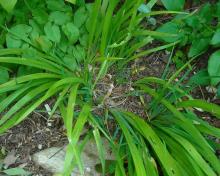 I'm not sure how I missed this thread earlier, but your irises are just incredible, Mark!  :o :o

These Iris are such easy-doers here... pot up an Iris cristata form and try to sell it for 1$ or even just 50 cents at a New England NARGS meeting, and it's like trying to sell some weeds, no one wants them because they're so commonplace here.  I find them all totally delightful and satisfying regardless.

I potted up some Iris cristata in the spring a few years ago and forced them the following winter very successfully with just natural light.  They were blooming door prizes at an early March NARGS  Minnesota chapter banquet.  Bill Dougherty of Summer Chase Gardens spoke on iris.  He is very good.  Iris that I potted up in late summer/early fall did not survive.

So if you have an overabundance, you can play with them in the winter, too.

These Iris are such easy-doers here... pot up an Iris cristata form and try to sell it for 1$ or even just 50 cents at a New England NARGS meeting, and it's like trying to sell some weeds, no one wants them because they're so commonplace here.  I find them all totally delightful and satisfying regardless.

Just come and sell them over here, Mark. You could ask 5 euro's for a pot of I. cristata and they'll sell very easily...

Just come and sell them over here, Mark. You could ask 5 euro's for a pot of I. cristata and they'll sell very easily...

True enough, but it would probably cost 10 euros per pot to ship them ;)

Funny how in a global context, some plants receive little fanfare while elsewhere the same plants can be coveted.

Iris 'Eco Little Bluebird' is showing a flower now, a bit out of season  :rolleyes: 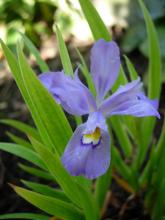 Excellent!  I've never had one of these through a bloom in the fall. Since we were talking about how much a named Iris cristata might cost in Europe, how much did you get it for, or was it shared by a friend.  With the name 'Eco Little Bluebird' this has to be one named by Don Jacobs from Decatur Georgia (Eco Gardens)... all his named selections are named in the form of Eco-this or Eco-that.