You're going to get me hooked on a new plant-addiction (and I already have to many  ;)). I wonder where I can find these in Europe...

I like Iris cristata 'Sam's Mini', Iris minutoaurea and Iris species novum the most.

For some reason I have no luck with Iris cristata  :-[

I've never managed to winter I. cristata over here either, maybe for different reasons - who knows?  Do other Calgarians out there grow it successfully?

Hmm, I have never given it a second thought, about Iris cristata hardiness.  They never show the slightest indication of winter kill, so I just assumed if they perform this well in USDA Zone 5, they might do nearly as well in Zone 4.  Checking the USDA Plant Profile for Iris cristata, I see that it is definitely a Eastern USA species centered in central to southern States, with a disjunct distribution to include little ol' Massachusetts (in USDA, Massachusetts not included in FNA).  So it surprises me to learn it is not growable in Alberta nor Newfoundland!http://plants.usda.gov/java/profile?symbol=IRCR

I have never tried it over here, Mark, but if I get the chance I'll give it a try both at home and at my seaside cabin.

I don't think hardiness is a problem here...I just don't seem to have the right conditions...frost heaving is a b***h around here and Iris cristata with its rather shallow roots, gets nailed.  I think we have one member in our society that grows it in her actual woodland, among Cornus canadensis, Clintonia borealis and Trilliums.  She can also grow Soldanella, another species I have absolutely no luck with.

I hardly give Iris cristata a second thought here, just like Mark.  It does its thing without any special care.  At least for Todd, outright cold can't be the deciding factor.  He has warmer winters than me.  The only thing I have found with Iris cristata is transplanting in fall is usually deadly.  But that's apparently not so uncommon in that iris section or with bearded irises.

Iris lacustris is carefree here, too.

Rick, I think you hit the nail on the head, late planting is fatal with them.  In my photo exposé of dividing and planting Iris cristata, the exercise took place on Jun 21, 2010.  This is a point after flowering where new rhizomes above the soil have expanded and just starting to tap down into the soil with "anchor roots" (the photo of an uprooted division shows this), the best time to divide.  Since the rhizomes basically sit on top of the soil, they depend on well developed and mature "anchor roots" to get them through the winter.

Last winter we had much less snow and I photographed the bare ground where a large patch of Iris cristata 'Shenandoah Sky' grows under a Stewartia pseudocamellia tree. In January & February I'd look at the exposed rhizomes and cringe, but they do just fine. 2010 was an exceptionally early spring, here is the bare mass of rhizomes in March. 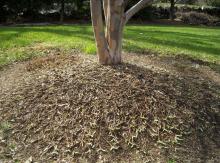 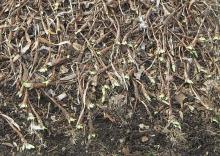 Close by I have an old clump of Iris gracilipes "Buko Form", a tiny miniature form with white flowers.  Since it was an early spring, I got over anxious and cleaned up the old foliage, which makes a thatch concealing the budded rhizomes.  It was a mistake.  A day after the cleanup, we had a deep freeze, and slowly over the next few weeks, parts of the large clump starting dying off.  Eventually I only saved a small piece... fortunately I had a few 2-3 year seedlings coming along. A friend warned me the year before, "you really should divide up that clump", but I got lazy and didn't do it.  The seedlings had no problem with the sudden cold snap. 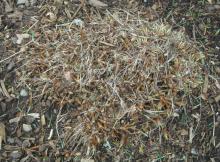 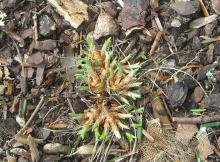 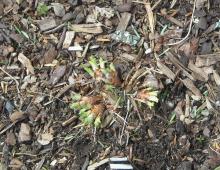 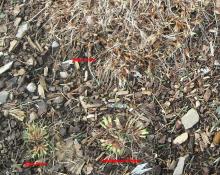 It was a mistake.  A day after the cleanup, we had a deep freeze, and slowly over the next few weeks, parts of the large clump[of Buko Form] starting dying off.  Eventually I only saved a small piece...  The seedlings had no problem with the sudden cold snap.

Mark,Did you do anything to "save" the remaining Buko Form, or just let nature take its course?

And had you cleaned the seedlings too, and they still sruvived?  Maybe there just wasn't much old foliage for protection anyway.

Mark,Did you do anything to "save" the remaining Buko Form, or just let nature take its course?And had you cleaned the seedlings too, and they still survived?  Maybe there just wasn't much old foliage for protection anyway.

Yes, I tried to save it, divided up the entire clump and replanted smaller pieces, but the growth points just sat there and most shriveled away.  I got only one remnant piece to survive.  The super hot & dry summer didn't help, even though I watered the divisions religiously.

The 2 & 3 year seedling plants had been "de-thatched" too, but were okay with the sudden deep freeze.  I think the mother plant's rhizomes had just become too large, dense, and weakened with age, and were in need of division years before.