Recently we moved Symphotrichum ericoides 'Snow Flurry' into several pockets in a rock wall, and have been impressed by their performance. Now we are hunting for other colour forms of Symphotrichum to add to the wall to give it more interest in the late season. I know that S. ericoides comes in other colour forms (pink or blue), but have not been able to find any other prostrate/creeping forms to compliment 'Snow Flurry'. I would welcome any recommendations (US zone 5 to 6 here). 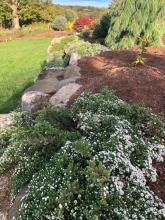 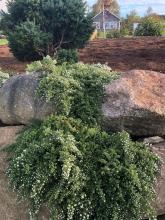 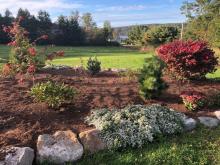 I have had Snow Flurry in my garden since year 2000. Love it, too, but sorry that I can't help you in your quest.

I'm a real fan our native Aster species here in New England (I still call them Aster either though they're got relegated to Symphyotrichum, Ionactis, and several other genera), and went through a multi-year quest to collect forms that I would find along roadsides and highways.

Back in 2006 I visited Garden In The Woods (GITW) in Framingham MA, the home to the New England Wildflower Society, to revisit and photograph a particularly special form of Symphyotrichum ericoides, also a dwarf form but much smaller than 'Snow Flurries'. In fact, their form is essentially prostrate, making mats growing 1"-3" tall.  I spoke to the head horticulturalist at the time, Rolf Schilling, and he told me this was found growing around the banks of the Charles River in Wellesley (close to Boston). He generously accepted my request for cuttings, even though late in the seasomn (Nov), and over winter I successfully rooted them. Rolf told me "fyi, there are a great many of these cropping up at the grass for the launch for canoes for the Charles River in Wellesley on Recreation Road. They are of the same phenotype as the plants here (at GITW) prostrate compared to the majority of those I've seen elsewhere".

I did a little field trip to see if I could find any of these prostrate forms, the area is not as idyllic as one might imagine, in Wellesley the Charles River wends its way beside and under Interstate 95, most of the riverside are inaccessible due to chain-line fencing, and at the canoe launch area, it was gated shut for the season, but I was able to get riverside near by, found lots of regular tall ericoides, but not the prostrate form.  I believe the prostrate form might be very hard to locate among the aggressive taller herbage.

Few realize that there is a prostrate form of heath aster recorded from Missouri, Wisconsin, and several other central plains States, assigned the name Aster ericoides var. prostratus (also listed as Aster ericoides f. prostratus), but these names are not taxonomically accepted as far as I'm aware.

Twice in the years hence, I have saved my plant from the brink of death, in years that placed great demands on me for my professional career, where I lost parts of my garden due to weeds. But no worries I still have it, and shared it with a nursery.  I think this form should get named Symphyotrichum ericoides 'Rolf Schilling'.

Uploading a couple low resolution photos from October 2003, of the large mat growing at Garden In The Woods. I will upload more photos in a separate post. 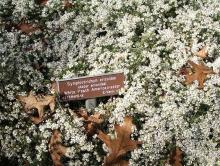 Few realize that there is a prostrate form of heath aster recorded from Missouri, Wisconsin, and several other central plains States

Certainly I didn't know.  Thanks for that, Mark.  And for taking the time to scan the photos.  A real gem!