Land Above the Trees: A Guide to American Alpine Tundra 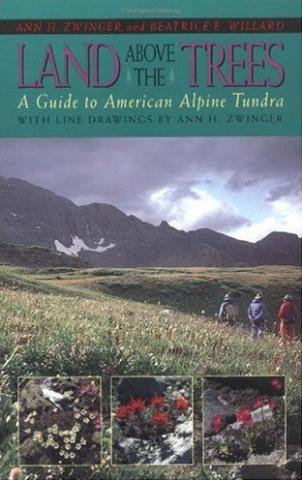 I acquired and read this book, Ann Zwinger’s second (after “Beyond the Aspen Grove,” 1970), when it was first published. After a lapse of some 38 years, I have just read it again; it remains a singular work.

It is indeed a Guide to American Alpine Tundra, but it is not a conventional guide book, comprehensively and systematically describing and illustrating plants according to standard classification. It is a guide to topical plant ecology, probably the most interesting and illuminating we are likely to find on the montane flora of the American West. It is also the best written such book I have ever encountered; the author’s prose is the most elegant, succinct, and precise we are apt to find in a field guide to anything.

One way of “reviewing” this book — at the risk of being accused of taking an easy way out — is to quote the Table of Contents:

“Part Three: Man and the Tundra.”

The individual chapters are self-contained narratives: The author traverses alpine areas, in good and bad weather, on easy and difficult terrain, and she gets close to the ground and observes and describes what she sees, with an economy of words and elegance of diction which are very rare in my reading experience. She knows all the plants she sees, and the animals and the birds and the insects and the terrain and the rocks, and describes in masterful and economical prose what she sees, and what she thinks it means. Having had some experience of the high country, the reviewer sincerely admires her poise and perseverance in systematically exploring difficult terrain in all sorts of weather.

Her writing style may be demonstrated by choosing any random passage of her book — as I just did this minute, pages 172-173: “An insect that crawls into a pendant harebell crawls upward toward the light to find nectar. An insect which enters the gentian must crawl down, into darkness. Since many day insects have an aversion to darkness, such flowers as this gentian are often paler toward the base of the bell, making entrance more attractive to its diminutive pollinators. A minute black insect emerges from the throat of the flower, tentatively explores the convolutions of the petals, slips over the side and crawls down the stem. Its weight is insufficient to disturb and close the gentian.” The whole book is written in this crystalline, spare, precise, and beautiful style; it is a joy to read.

Many pages reproduce Ann Zwinger’s black-and-white line drawings of plants she discusses, usually with added sketches of botanical details; the drawings are as beautiful and accomplished as her prose, but in the field an explorer will want to have one of the conventional, systematic, illustrated guides along for identifying plants not previously known to her or him.

Dr. Beatrice E. Willard, the book’s co-author, wrote the Preface and contributed many of the color photographs reproduced in the center of the book (along with others taken by Ann Zwinger’s husband Herman). Dr. Willard also provided extensive field data which Ann Zwinger incorporated into her book; clearly, the two felt themselves to have been co-authors.

If you love Western mountain ranges and their flora, read this book.