INSPIRED BY THE success of Kenton Seth’s crevice garden installation in 2014 at the JC Raulston Arboretum in Raleigh, North Carolina, Tony Avent (owner of Plant Delights Nursery, Inc. @Juniper Level Botanic Garden) explored the opportunity of incorporating a crevice garden to enrich what is already one of the great living plant collections (currently over 22,000 taxa). Juniper Level Botanic Garden (JLBG) has been home to hundreds of amazing but now deceased rock and alpine plants that will not survive in JLBG’s nutritious, humus-rich, irrigated garden soil; instead, these plants require ultra-coarse soil, with little or no organic matter.

In beginning the project, our first challenge was stone selection and acquisition.  We have a limited budget.  Fortunately, a demolition project on a newly acquired adjacent property yielded over 70 tons of concrete slabs (a.k.a. “urbanite”) between 4 and 6 inches (10 to 15 cm) thick.  Since the same amount of quarried flagstone would cost around $20,000, the repurposing of the broken concrete slabs was an easy decision.  Furthermore, concrete disposal costs around $75/ton; as we had already painfully discovered on our first Waste Industries bill.  When someone asks where we acquired our “flagstone,” we respond, “It is urbanite quarried from the property!”

Although crevice garden “soil” varies from site to site, crevice gardeners agree it should be structurally coarse and deficient in organic matter.  Beyond that, we didn’t find many strong guidelines regarding the chemical properties of crevice garden media.  We chose PermaTill® to be the base for our soil mix.  PermaTill®, manufactured by Stalite Environmental, is a sterile and inert, expanded slate product that offers consistently coarse texture, pH 8.0, and high CEC (cation exchange capacity).  It is pea size, lightweight, and creates pore spaces for quick drainage. We added a trace amount of native coastal plain sand (phosphorous index >60; pH ~4.0) and a trace amount of Raleigh red clay (potassium index >60; pH ~5.5).  We also added a small amount of clean, screened gravel (#57 stone) to maintain crevice spacing.  Some organic matter was scooped up inadvertently during the mixing process.

There was little guidance we could find on how to begin.  The urbanite slabs were more consistent in thickness than any Internet “crevice garden” search examples—and very heavy.  We turned to crevice garden aficionado Kenton Seth, from Colorado, for advice.  We discussed construction, design, “soil,” and even crevice garden wine pairings in a long string of emails and a couple of phone conversations.  The first stones were set in January 2017. With the design and installation help of another crevice gardening veteran Michael Peden, from New York, the first phase was completed in late March 2017.  We thank both Kenton and Michael for their huge role in making our crevice garden truly amazing!

The first phase covers roughly 400 square feet (37 sq. m) with several compost-based soil pockets built in.  By early April 2017, about 200 plants were planted or transplanted into the crevices and pockets, including a 10-foot-tall (3 m) Nolina.

As the project moves forward, we will continue trialing more rock and alpine plants in the crevices, including about 100 taxa germinated from the 2016 NARGS seed exchange.  Our focus is on trying (and re-trying, and re-re-trying) hydrophobic plants from hot climates like Chile, Argentina, Turkey, and the Mediterranean.  We also hope the coarse, stone-based soil will reduce the foliar disease pressure on pubescent-leafed plants.

By mid-to-late fall 2017, we hope to have extended the crevice outcropping about 200 linear feet (60 m) down a cut bank with some alkaline seeps included.  Come see the crevice garden at the upcoming annual NARGS meeting, November 17-19, 2017. 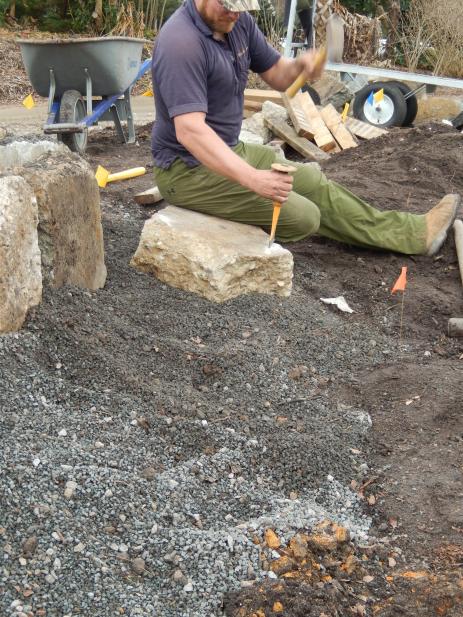