THE GENUS GALANTHUS (snowdrops) brings cheer to gardeners in winter, a beacon promising cold weather and an extended show of small white flowers. Whenever my snowdrops are visible I spend much time on hands and knees to examine the flowers in detail, noting the shapes and markings on their inner or outer tepals, and shapes and colors of leaves. Even when they aren’t visible above ground, they remain an imaginary vision.

Members of the amaryllis family, snowdrops are poisonous to most critters so they can survive without protection from deer, rabbits, and other herbivores. They can tolerate summer heat and droughts by remaining dormant, only appearing above ground in my garden in the cool of mid-fall through early spring (depending on the species and weather). Many forms multiply quickly and transplant easily when in growth, which begins in the roots about a month before the tips of their leaves appear above the soil.

My passion for snowdrops began when my husband and I moved to Montrose, in Hillsborough, North Carolina, and I started to garden seriously. I finally had good, loamy soil to work with, and I wanted to grow everything I could that would thrive in my climate, so I joined the Royal Horticultural Society, American Horticultural Society, and the American Rock Garden Society primarily for their journals and seed exchanges.

The first winter in my new garden, I found one small patch of large-flowered snowdrops at the edge of the woods and moved a few bulbs to the old rock garden at the front of the house where they grew vigorously. In 1985 I purchased snowdrops and other bulbs on sale after Thanksgiving, planting them here and there hoping to discover the place where they grew most happily. As time went on, I bought more bulbs when I found them offered in bulb catalogs, accepted divisions from friends, and gradually learned that many species and forms grow well here including Galanthus elwesii,  G. reginae-olgae,  G. peshmenii, G. gracilis, G. nivalis, G. woronowii, G. ikariae, G. rizehensis, and G. plicatus.

Montrose house is at the top of a fairly steep hill that ends in a broad flood plain bordered by a small river. To control erosion, a Works Progress Administration project in the 1930s installed a series of terraces above the river. To use that history and shape of the land as a design feature, in early January of 2002 I planted a snowdrop walk with Galanthus nivalis at the top of one of the ridges, drawing attention to a curving path almost 300 feet (91 m) long and about 3 feet (1 m) wide. It took me about a month of planting one bulb to a hole to create a “river of snowdrops” that reaches peak bloom in mid-February. These snowdrops grow beneath large tulip poplars (Liriodendron tulipifera) where they have increased quickly for me. After only about 3 years, I had a fine display which could be seen from the more formal areas of the garden.

In the fall of 2002, I began planting in a woodland area beneath Aesculus flava, Celtis occidentalis, and Maclura pomifera. I had planted a few snowdrops in this area several years before to see how well they grew, and they increased quickly, so I decided to make a major planting there. This project took about 10 years to complete as I cleared the land of small trees and weeds and began planting and dividing the early-flowering form of G. elwesii var. monostictus. My original bulbs came as 12 “snowdrops” from a local farm supply store, and when I first planted them, I had no idea they would bloom in late fall and early winter.

I was so delighted by the displays of these species that I began looking for other areas to fill with one form or one species and now have large plantings of Galanthus gracilis, G. nivalis, G. n. ‘Viridapice’, double-flowered G. n. ‘Ophelia’ and ‘Cordelia’, G. elwesii Edward Whittall Group, G. elwesii (an early flowering form with faces), G. reginae-olgae, G. elwesii var. monostictus on another winding path at the top of another ridge, and other unnamed forms. The differences of each species or form can be seen easily when in full growth and planted in masses—gray-green leaves of various widths, shiny green leaves, short leaves, taller narrow leaves.

Now that I have many large areas throughout the woods planted with snowdrops, I have come to appreciate the value of galanthus as a winter cover crop. They can be seen across a wide valley, at the edges of the ridges, and in many other areas separated by paths or fields. I plant them in wooded areas, which are well drained in summer and, although they grow best in a neutral soil, I seldom fertilize them. I spend much of each winter looking closely at my snowdrops in search for something different and worthy of a major planting, but I have resisted the temptation to collect named varieties. I am fascinated by the enormous variety available but shocked by the prices they bring.

When the last few leaves of my snowdrops fade in early April, I count the months until I see the tips of the first Galanthus reginae-olgae in October. Toward the end of the summer, I am counting the days!

Getting and Growing Snowdrops

Nancy Goodwin has discovered that snowdrops grow best at Montrose in deciduous woods with loamy soil where there is adequate moisture and good sun during the fall and winter growing season, but well drained during the summer dormant season. Her foolproof method in moving snowdrops in her garden is to dig an entire clump while in growth, being certain to include the long roots; immediately put them in water so the roots won’t dry out, replant and water thoroughly. If she is giving the bulbs away, she wraps the entire clump of bulbs and dirt in a damp paper towel. “Just don’t let the roots dry out and don’t damage the roots,” she says.

Here in the South, most snowdrops are available at garden centers in late summer and autumn, frequently when the bulbs are dry, and the result is that gardeners find little success. However, if you can get bulbs earlier just as they are going dormant or can obtain bulbs that have been carefully dug, stored, and not allowed to dry, your likelihood of success is considerably improved.

Some U.S. sources of snowdrops include the following: 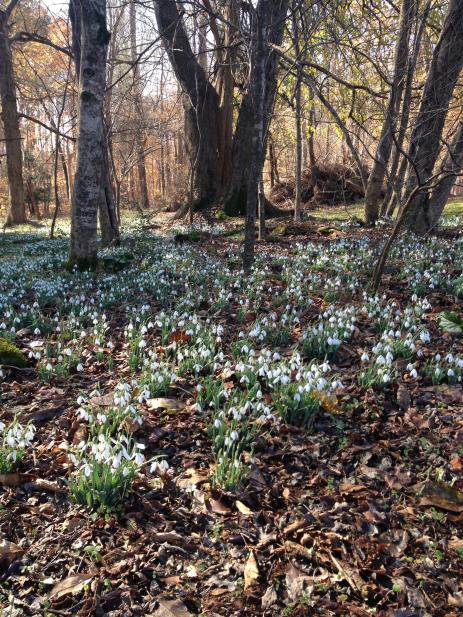