THE JC RAULSTON Arboretum in Raleigh, North Carolina, has three garden areas devoted primarily to rock garden plants: a scree garden, rooftop terrace, and a small crevice garden. All three showcase the range of plants that can be grown in a hot, humid climate not normally associated with rock gardens and alpines.

In 2006, the JC Raulston Arboretum undertook the installation of a scree garden. We sprayed and rototilled an irregular-shaped area, approximately 85 feet by 20 feet (about 26 x 6 m), just west of the Ruby McSwain Education Building. Our native Piedmont clay does not provide good drainage, so we used cubic yards of soil mix— ¾ sandy topsoil and ¼ PermaTill® (a heat expanded slate) — to make berms that reach a maximum height of about 30 inches (76 cm). We added a few large boulders to form the bones of the garden and a thin layer of PermaTill® as mulch. To allow visitors to view small plants, we cut a gravel path through the bed, which we later coated with Klingstone, a polymer glue that prevents movement of the pebbles yet still allows water to percolate.

We finished the initial planting of the scree garden in September 2006. While this may not have been the optimal season for planting many of the less-hardy taxa, survival over the winter was nearly 100%. Plants were quite small at the time of installation, yielding a quite open look, but they rapidly grew and filled in the space.

The so-called “woody lilies” now provide much of the structure of the scree garden. Agave asperrima (syn. A. scabra) has flowered once and offsets prolifically, guaranteeing future blooms. Agave ovatifolia has proven to be very hardy over several winters, and its powder blue-gray leaves are a perfect foil to the bright flowers of the various Salvia greggii cultivars planted around it. The salvias provide a fine-textured, year-round presence to the garden and almost eight months of sporadic bloom.

Yucca torreyi has turned out to be the giant of the scree garden, growing from a one-gallon plant to an eight-foot spiky presence with several foliage heads sprouting from the trunk. The cream-colored flowers emerge in early spring and can be best enjoyed from the steps leading up to the roof of the McSwain Building.

Another plant of considerable size in the scree bed is Dasylirion texanum, although here it’s a matter of circumference rather than height. With large, multiple heads, this dasylirion has a spread of several feet. The twisted leaves are armed with light green spines that glow when backlit and dance in a strong breeze. Also known as sotol, its flower panicle can shoot to eight feet tall and is beloved by our local bees.

Delighting visitors with its milk chocolate fragrance, Florida chocolate flower (Berlandiera subacaulis) is covered with yellow composite flowers from May through summer. It is native only to sandy areas of Florida and demands excellent drainage the scree provides; it is even seeding around a bit. Nearby is Chrysactinia mexicana, a small, evergreen shrub with yellow daisy flowers during much of the growing season and highly pungent, fine, needle-like foliage.

Fall visitors to the scree garden will miss the lovely flowers of Pulsatilla, hopefully serving as an enticement to visit again in the early spring. If you miss the flowers, you might catch the fluffy seed heads a few weeks later.

The McSwain Building was initially topped with an intensive type of green roof in the early 2000s. The flat surface was originally planted with several varieties of low-growing drought-tolerant perennials such as sedum. These plantings did not provide a great deal of visual interest and became infested with the weedy creeping spurge (Euphorbia maculata).

In 2007, the roof received a radical re-do. We removed the original plantings (and weeds) and brought in additional soil, predominantly a mix of PermaTill®, along with some sand and organic matter. The new soil layer ranged from a minimum of six inches in depth, up to berms about 18 inches (46 cm) high. The roof beds have a highly irregular shape, with an overall area of around 2,000 square feet (185 sq m).

The roof plantings are similar to those in the scree bed, but there are some interesting additions. Hailing from Texas is Diospyros texana, a small shrubby tree, now about six feet tall. It is deciduous in our area and is developing a wonderful exfoliating bark. Hesperaloe campanulata, a member of the Agave family native only to the Mexican state of Nuevo León, has leaves that curve slightly inward on themselves while thread-like filaments peel from the edges. In summer, Hesperaloe campanulata puts out long wands adorned with dozens of pink flowers.

A couple of plants in these beds should come with strong warnings in case you get the urge to incorporate them into your garden. Romneya coulteri is a member of the poppy family, hailing from the California high desert. Located against the wooden wall in the scree garden, in the spring it’s actually an attractive sub-shrub, with blue-gray foliage and large “fried-egg” flowers. But in our humid summers the foliage quickly becomes diseased and unsightly (though cutting it back will provide fresh foliage for a time). Despite not being entirely happy in our climate, Romneya will sucker like mad and engulf any nearby plant. You have been warned.

Another overly aggressive plant can be found on the roof: Hyalis argentea (syn. Plazia argentea). It is a composite with silvery, grass-like foliage and small, pale lavender flowers, and it too can look deceptively appealing. But in winter it turns into a floppy brown mess, and come spring this Argentine native will resume rampant growth and tango right through its neighbors. It might work in a container, or perhaps in a bed where it’s the sole plant.

The crevice garden started as a workshop installation presented by Kenton Seth in March 2014. The area, approximately 10 feet by 12 feet (about 3 x 4 m), provides space to attempt many smaller growing plants that need excellent drainage and would get lost in the larger roof or scree gardens. Thanks to a lot of trial and error, the norm for this area, we now have about fifty taxa growing among the tightly placed stones and sand substrate.

Several cacti now have settled in between the slabs. Two forms of Escobaria sneedii subsp. leei, now only an inch or so across, grow in the gravel mulch on the southwest side. On top of the crevice garden, a brittle Opuntia fragilis is taking root. The flat Mammillaria heyderi subsp. meiacantha hides near the base growing flush with the ground. Higher up the outcrop, little globes of Pediocactus simpsonii and Lobivia aurea subsp. leucomalla are beginning to establish. Walled in between some slabs of stone, an Echinocereus triglochidiatus var. inermis will flower for the first time this year. On the sand slope of the north side, a wheel-like Parodia sellowii was unfazed by the 5 F (-15 C) in January 2017. The center of the west face of the crevice garden is the location of an eight-inch mound of Maihuenia poeppigii.

Dianthus feels at home in and around the stones, too. Tight, mat-forming Dianthus arpadianus var. pumilus and Dianthus erinacea var. alpina defy the summer heat and humidity of North Carolina, despite the loss of Dianthus × arvernensis and Dianthus microlepis in 2016 because of that same weather. Larger-growing Dianthus callizonus has formed a small colony of seedlings on the sand bed, sloping up to the rocks.

In some tight spots near the base of the outcrop, Globularia pseudonana and Globularia cordifolia have begun covering the adjacent stones with their mats of foliage, though only lightly flowering. Rock garden Brassicaceae give us a challenge with the wet summers, but Aethionema subulatum, with early pink blossoms, Draba aizoides, and Physaria arizonica, with late-winter yellow flowers have defied the odds and survived our summers. A mat of Pterocephalus depressus, with pinnatifid foliage, creeps along in the gravel surrounding clusters of stones that give added texture. Halfway up the outcrop, a developing carpet of Phlox subulata ‘Herbert’ covers tiny foliage with equally tiny, soft lavender flowers each spring.

The crevice garden provides a place to grow many plants that in cooler areas would prosper in typical rock gardens. However, because of our sustained heat and summer nighttime temperatures in the 70s F (20s C), coupled with summer humidity, many plants do not grow satisfactorily. We will continue to trial additional plants.

The JC Raulston Arboretum owes a debt of gratitude to Tony Avent (Plant Delights Nursery) for plant donations and to Carolina Stalite for providing PermaTill®. NARGS’s Norman Singer Endowment Fund provided grants that allowed enhancements to the rooftop terrace and the addition of hypertufa troughs. Also, we thank Kenton Seth and the Piedmont Chapter of NARGS for funding Kenton’s lecture and crevice garden installation. 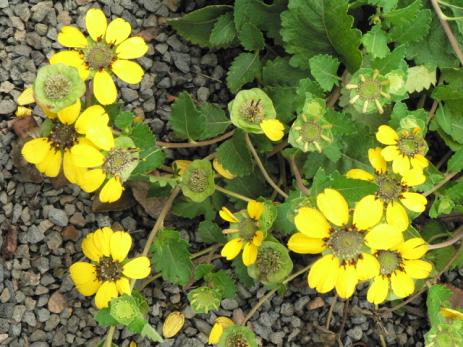