Skip to main content
The Rise of Dutch Urbanite

UTRECHT UNIVERSITY BOTANIC Gardens have one of the biggest rock gardens in Europe. That is bit peculiar, maybe: Utrecht is at about 3 feet (1 m) elevation, and the Netherlands have hardly any natural rock. However, according to photographs, the old botanic gardens in the historical city center had a rock garden as early as 1900. These rock gardens were small, but enough to show biology students the adaptations of high alpine plants to their harsh natural environments. Later on, when the Botanic Gardens obtained an English landscape park in the nearby village of Baarn, a bigger rock garden was built. No natural rock was used for building this rockery: it was built with slag, the waste product of steel production.

When the University planned a new campus at the Johannapolder around 1960, there was an old fortress in the heart of the area. Its huge bomb-safe bunkers were covered with feet of soil to produce what, to the Dutch, are “mountains” 40 feet (12 m) high. In 1963, construction of rock gardens on these “mountains” started and was more or less finished ten years later using over 2100 tons of limestone rock imported from Belgium. As a garden is never finished, we have been continuously developing new features and details like a peat bog, a moraine, and peat beds.

During the 1980s, the gardens had hardly any money for new developments. However, the gardeners at the time were not the kind that could be stopped by such minor trouble, and they turned to using waste materials to build new gardens. Some small displays near the entrance building were built of old paving stones and roof tiles. When the alpine house was built into one of the remote slopes of the fortress, a huge retaining wall had to be built. They used broken concrete curbstones and concrete paving stones, mostly 1 ft by 1 ft  (30 cm by 30 cm), the most common concrete paving material in the Netherlands. Those stones were freely available as waste material from road construction sites, and thus, were very cheap. The horizontal layers of the roughly 2.5 inch (6 cm) thick stones were stacked with only a thin layer of the normal clay garden soil in between. This wall was my first introduction to “recycling gardening” when I visited the Botanic Gardens as a boy in horticultural school.

In later years hypertufa troughs were made and grouped at the foot of this wall, showing a display of the adaptations of high alpine plants like mat and cushion shapes, sun protection, and ability to grow in mineral soils and rock.

In 1995, on the occasion of the tenth anniversary of the Dutch Rock Garden Society (NRV), a rock garden show was built at the gardens. One of the highlights was an enormous sphere built of the same broken concrete paving stones. The perfect shape and the layers of black slate marbling the construction were the ideas of my predecessor Wiert Nieuman who was inspired by the work of Andy Goldsworthy and Czech crevice gardening.

Building the structure was quite an experiment. A steel pipe that feeds a water sprinkler on top was first placed and used as a center point. A mold of plywood was placed to make sure the globe would be a real globe, and not a cone or an egg. A circle was drawn from the mold with a piece of rope, and the first layer of broken concrete slabs was placed: first the outer circle and then the inner was filled. The crevices were filled up with normal garden soil, and the whole first layer was covered with 0.8 inches (2 cm) of soil. Mixing this soil with some grit or scoria keeps the soil from compacted too much between the layers. The next strata were placed in the same way, every layer in a circle a little wider than the one beneath. Once the maximum width was reached, circles became narrower again, and the globe flattened on the top.

Around 2000, the retaining wall and alpine house were to be renovated. While making plans, we thought of making diagonal crevices with the concrete slabs, inspired by the tilted strata of rocky outcrops one sometimes finds in nature. By using a diversity of concrete paving stones with different sizes and surfaces as well as discarded basaltine curbstones, we created a nice pattern through the wall. The final result is a huge retaining wall 100 feet (30 m) in length and over 6 feet (2 m) tall at the highest point.  The alpine house was integrated into the end of the wall and built using tufa rock obtained from a renovation project of an ancient church in Amersfoort.

A few years later the raised beds near the entrance were completely rebuilt using baked clay roof tiles. These roof tiles are very common in the Netherlands and available in many models, glazed or not, and mainly in red or black colors. Their baked clay provides a porous material, and the strata of broken sides remind one of black slate. The old grayish roof tiles we used were waste materials from a renovation project. The tiles were broken and stacked horizontally with a layer of garden soil in between. The tiles are curved, and we placed the hollow side facing up to catch and store some rainwater. The body of the raised beds was filled with garden soil mixed with grit to provide perfect drainage. The rubble of roof tiles that was left at the end of the building was crushed by driving over it with the tractor and used to mulch the surface of the beds. The top of the beds are covered with a polytunnel roof seasonally to protect plants from our wet winters.

Some huge concrete sewer pipes were sawed in half, partly dug into the ground and the space between them was filled with gritty soil and tufa. Facing towards the entrance of the gardens, they form the background for a group of stonework troughs.

These raised beds and other structures are meant to inspire visitors and to show how a cheap, sustainable and attractive rock garden can be built in a small Dutch backyard.

New Materials to the Test

The idea of using wasted building materials instead of expensive rocks from abroad has inspired us and many others in the Netherlands. The use of broken concrete paving stones for retaining walls is so widespread nowadays that you can even find walls built of broken, brand-new paving stones!

At this time we are testing something new: the white blocks of “aircrete” (autoclaved aerated concrete) commonly used for interior walls. As a waste material, it´s at hand everywhere, but it looks awful. Curious to find out whether plants are willing to grow in this very porous and gypsum-rich material, we have filled a trough with chunks of it. And yes, they love it! Moisture and frost don’t seem to harm the material, and even better, after a couple of years, algae and lichen soften the horrible white to a more natural-looking gray. Next test will be stacking layers to see if the weight will crush the blocks or if they will be useful for durable outdoor constructions. One of the major advantages of this material is its light weight which opens the way to rock gardens on roofs in urban environments. That may bring alpines to unexpected heights, even in the Netherlands! 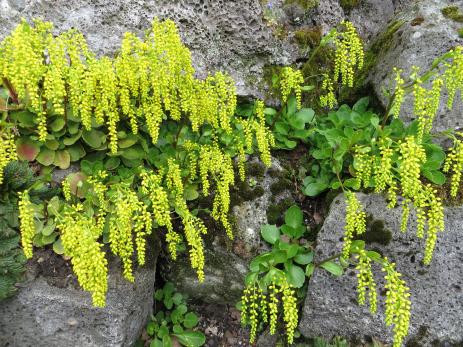