SMITH-GILBERT GARDENS is a roughly 16 acre public garden located in the historic southern town of Kennesaw, Georgia. It is humid and it is hot. Macaroni and cheese is considered a vegetable here. We have only one kind of tea and it’s sweet. Most Southerners idea of a rock garden is Stone Mountain (the largest exposed piece of granite in the world) and its laser show. Not exactly the sort of place one thinks of when one thinks of alpine gardens.  Crevice gardening started with Czech rock gardeners, in Europe, where the climate is better suited to most rock garden plants. Crevice gardening is really starting to gain traction in the States and we are excited to be a part of this growing trend, but when I told our volunteers we were ‘fixen’ to turn the old rock garden into a crevice garden they looked at me the way a dog looks at a ceiling fan.  “What exactly is a crevice garden?” they asked. I said, “It’s rock gardening, only edgier. Literally.”

We had just been awarded a grant from the Stanley Smith Horticultural Trust and, though substantial, I was still concerned where the stone would come from. Then I paid a visit to Tony Avent in North Carolina. His garden has always been an inspiration to me, and I have always said to Tony that of all the gardens out there, his is my favorite. So when I saw Tony’s crevice garden made from recycled concrete I knew that was exactly what I wanted to do. I picked his brain and formulated a plan. Now where on earth was I going to get that much trash concrete?

Not since Sherman came through and burned Atlanta during the Civil War in 1864 has there been so much rebuilding and new construction in Georgia. We are owned by the City of Kennesaw and they are revitalizing the downtown and replacing the existing sidewalks around the courthouse. Being owned by the city has its perks. They could provide all the ‘trash’ concrete I needed. In the South, when life gives you lemons, you put it in your tea to cut the sugar…but in this case, life gave us concrete! By using trash concrete once slated for the landfill we were able to keep over 14 tons out of the waste stream.

Now mind you, I love natural rock, in fact I have always said I am the perfect woman: when I tell you I want a really big rock, I mean I want a really big moss-covered rock. However, using “urbanite” (our fancy word for concrete) in the crevice garden, made me think of what Dolly Parton always said, “I’m not offended by dumb blonde jokes because I know that I’m not dumb. I also know I’m not blonde.” It’s not real stone but it is stone, and it works smashingly.

The original rock garden was installed well over 20 years ago and was in a good bit of shade. All that changed when, in one of our severe winter ice storms, a large old hickory came crashing down. Losing that tree opened the once shady rock garden into almost full sun. Along with more sun came more heat and more weeds. The area that was once a source of enjoyment and beauty became overgrown and unmanageable. The old rock garden had big granite boulders that a local quarry had donated to the original owners of the property and, while dramatic, they were poorly placed and looked as though someone had simply backed their pickup truck full of rocks and dumped them. Some of the boulders were so large we had to incorporated them into the crevice garden design. I was concerned at first that the granite boulders wouldn’t work with the linear lines of the concrete; however, by creating boulder islands surrounded by the concrete lines, it broke it up and added depth to the whole garden. I have always loved working with plants in a design but what I really love is planting and arranging stone.

One of the first and best things we did was removing as much of the weeds as possible. We hand pulled the weeds (we do not use herbicides or pesticides in the garden) and laid down thick patches of newspaper to prevent future weeds from germinating. We could have tilled the soil, but I feel it destroys the integrity of the soil by making it too powdery. I was also afraid that if tilled, it would allow too much settling of the concrete. Will we get weeds sprouting? Sure, but I like to think of it as job security.

All together, our own Horticultural Volunteers, The Cobb County Master Gardeners of Georgia, The Citrix Corporation and Georgia Power logged over 500 hours of volunteer work constructing the garden. In six weeks they created not only the first of its kind but the largest crevice garden in the deep South. Basically, they moved the equivalent of Stone Mountain, a truly Herculean effort. It wasn’t easy for our volunteers, as you can imagine. Teaching them how to ‘plant’ the concrete was a challenge in itself. At first it was difficult for most to understand what a crevice garden was, let alone build one. The mere concept of planting concrete on its side threw many of them. We held classes and showed the volunteers how to do it but, at some point, you have to trust that they understand what you want them to do and that they have a grasp of what crevice garden looks like. There were several occasions we had to undo what they had done. It was a learning curve for all of us. I would have preferred the luxury of time, to be able to lay the concrete out in one area before moving on to the next; making sure it was just right. But time was something we just did not have as we had to wait on the concrete to be delivered. Due to the extremely wet fall, the City of Kennesaw fell behind on their revitalization project which meant our project had to wait as well. The crevice garden needed to be completely installed and planted by the end of November 2017 to fulfill the obligation to the grant. The City came through for us and the volunteers stepped up to make it happen, all in the nick of time.

For many parts of the U.S., providing excellent drainage can be a challenge. Ample rains in our southern winters keep soil moister than most alpine plants prefer. By providing crevices with just the right soil mix we are hopeful the plants that we have chosen will not only thrive but reproduce. For our soil medium we chose coarse river sand and gravel, mixing it in a ratio of 1 part sand to 3 parts gravel. We also installed a French drain at the top to help with runoff during heavy rains. One particularly heavy rain event dumped 4 inches (10 cm) in 20 minutes, leading to severe erosion that went right into our koi pond located at the bottom of the rock garden area.

Unable to get heavy machinery to where the crevice garden was being installed proved to be another challenge, as it meant we had to do everything by hand. From the broken up concrete to the planting mix to moving the existing large granite boulders, everything was dropped or rolled into place by some very strong backs. Kitty litter buckets became a hot commodity. We used them when we channeled our inner mountain goats as we walked along the tops of the concrete slabs to pour the mix in between the crevices. Because this garden had so much gray in it, from the slate in the pathways to the granite boulders, I chose a red gravel as mulch. This broke up all the gray and really set off the white of the concrete.

This was one of the most labor-intensive and ambitious projects we had ever tackled. To this day, I am amazed no one, not one single person sustained any injuries other than extremely sore bones at the end of day. However, this project was also one of the most rewarding

Renowned plantsman Ozzie Johnson was brought in early on as a consultant. He not only helped with the laying out of the concrete, together we researched the plant material we hoped would work. I also found Joseph Tychonievich’s book, Rock Gardening immensely helpful. Knowing most alpine plants will not do well this far south, we chose to use dwarf plants that will grow to mimic true alpines but are better suited to our climate. Most of the plant material, except the conifers, were dormant. To give visitors something to look at other than concrete we added violas sprinkled throughout for winter interest. Think of it as alpine gardening with a southern twang.  Most of our plant material came from Plant Delights Nursery, Arrowhead Alpines, High Country Gardens, and Ozzie Johnson.

Alpine plants are used to growing and adapting to the harsh conditions of high altitude. But I’m not sure if they are prepared for the harsh growing conditions of our southern latitude. We can be working in 80ºF (27ºC) and in shorts, and a couple of hours later it’s 28 ºF (-2ºC), and we’re in our parkas. Gardening in the South is not for the faint of heart. I have been called overly optimistic when it comes to growing plants, but even I know not all of them are going to survive. It’s the optimist in me that keeps me pushing the boundaries and knowing that there are going to be survivors.

One of the plants that I love, and where I feel we are pushing the boundaries of our southern hospitality, are the dwarf daphnes. As of this spring, they look great and some even bloomed but it remains to be seen what influence our hot and humid summers will have on them. I remain cautiously optimistic.

With a grant from The American Conifer Society, we were able to revitalize a part of the crevice garden with new material and we also transplanted some of the dwarf conifers from our established collection to the new garden. With those grant funds we purchased some unusual and hard to find conifers from Appeldoorn Nursery in Bostic, North Carolina.

My goal for this new garden is to become an example for local and not-so-local rock gardening enthusiasts. This is going to be a fun garden to watch grow and evolve. I hope that it inspires generations for years to come. The new Crevice Garden is one of many reasons to visit Smith-Gilbert Gardens. Whether you are a lover of plants and nature or a lover of art and history, this garden has something to offer everyone. 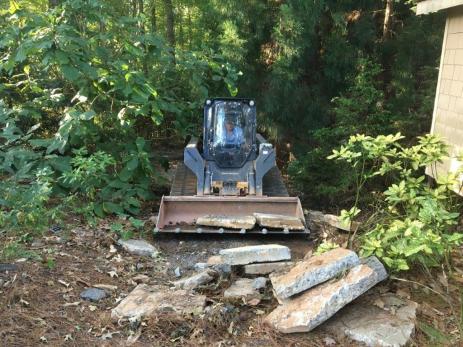