GARDENERS LIKE DIVERSITY. They especially like an assemblage of plants with something in common, large and diverse enough to be challenging in getting “them all,” but small enough to fit into a finite space – like collecting butterflies. “Come see my extensive collection of 35 different trilliums,” one might implore a fellow enthusiast. Different flowers, different leaves, varied fragrances, blooming at different times, some related, some not, with various habits, from a variety of habitats ranging all over eastern North America. Of course, such species were brought together from populations scattered across the region, but they may all be able to grow in your own back yard.

But what about high diversity of species in natural habitats, single locations with astounding diversity? There are indeed several situations that may be especially intriguing to rock gardeners. Think of the many species in the high mountain meadow – similar cushion, dwarf and erect forms, from different plant families, under the same environmental pressure of extremes of cold, thin air, and sunlight intensity in the alpine environment. These meadows are delights to behold and the plants offer a challenge to collect and grow. Other famously diverse extremes (outside of the tropical rain forest) include the Kansas tall-grass prairie, with as many as 22 species in a meter-square plot; and southeastern pitcher plant bogs with as many as 40 species in a sample plot. The high diversity in these examples is due (presumably) to a combination of frequent fire, critical levels of moisture, extreme soil factors, and minor variations in habitat structure.

We saw an area with a high diversity of plants on an outing with the North Carolina Native Plant Society in late October 2016 to a special habitat complex near Lake Baggett in the Sandhills region of southern North Carolina near Hoffman. It displayed an unparalleled collection of shrubs and rare wildflowers that we would not have encountered – as a community – anywhere else. I would say that the diversity of shrubs in a small area is not to be found anywhere else in North America. I would be interested to hear from anyone who would propose a similar collection of so many woody species in such a small space. Just as in the cases cited above, the factors of frequent fire, moisture gradient, and low nutrient content, along with physical differences in the terrain, interact to keep any one species from dominating and provide niches for several species to co-exist in close quarters without the aggressive, clone-forming species excluding all others.

The Sandhills region of the Southeast stretches from central North Carolina to west-central Georgia. It is a very narrow band lying between the Piedmont and the Coastal Plain and is the remains of an ancient beach dune, deposited about 20 million years ago. It includes parts of about 30 counties and is considered the interior-most band of the Coastal Plain in these states.  It is aptly described by botanist Bruce A. Sorrie in his excellent and unique book A Field Guide to Wildflowers of the Sandhills Region (University of N.C. Press, 2011). He says, “Among the significant features that set the Sandhills region apart are its rolling hills, generally poor sandy soil, and abundant creeks and small rivers. Soils…are generally…acidic, low in nutrients, and droughty.”  The region is dominated by the longleaf pine (Pinus palustris), a unique species adapted to frequent fires, which once dominated the coastal region from Virginia to Texas but is now much reduced.  The longleaf pine provided vast quantities of timber, turpentine, pitch, and tar for the British navy and its merchant ships beginning in the early 1700s.

The longleaf habitat is home to the endangered red-cockaded woodpecker, which is making a remarkable comeback. In such diverse habitats that range from very wet to very dry, one expects to find a diversity of species. Sorrie describes and illustrates over 600 species and divides the region into nine natural communities. To be sure, those wishing to cultivate the plants of this region must understand the extreme habitat features that sustain their existence, just as with the alpine meadow.

In visiting the North Carolina Sandhills Game Land location we walked through a sandy longleaf pine site bisected by what are called “wet stream heads.” Thus, the moisture gradient from very wet to very dry, frequent fire, and differences in nutrient levels in the soils were factors leading to the high diversity. I am not saying there were a lot of species in a meter-square plot like you could have with all herbaceous plants, but there were a large number of species in a relatively small area the size of a classroom (say about 30 feet x 30 feet or 9 x 9 m).

In addition, three pines (longleaf, pond, and loblolly) were there in close proximity. Since the demarcation of habitats can be very sharp, it is not unusual to find pond pine (Pinus serotina) that can grow in standing water within spitting distance of pines of deep, well-drained sands such as loblolly pine (Pinus taeda) and longleaf pine (P. palustris). In addition, we saw (in flower in late October) some very rare wildflowers: Pine Barrens gentian (Gentiana autumnalis), Carolina asphodel (Tofieldia glabra), and a new species of heartleaf ginger (Hexastylis sorriei) that grows in sphagnum seeps. The latter two are restricted to coastal regions of the two Carolinas (see the amazing useful distribution maps at http://bonap.org). In addition, and worthy of note from among the myriad of more common species of asters, goldenrods, grasses, etc., were the interesting grassleaf roseling (Cuthbertia graminea), dwarf sandhill iris (Iris verna), sweet pitcherplant (Sarracenia rubra), and southern purple pitcherplant (Sarracenia purpurea). These were locally common, with Sarracenia rubra acting as indicator of the perfect ecotone niche for white wicky, azalea and dwarf fothergilla. What a glorious experience!

While enjoying these plants in their natural habitats is a special experience, there are those who would like to cultivate them. While all are not available commercially, many are. The dryland species must have well-drained, sandy soil (plant them in a sand pile). It is easier to add water than to take it away. These include dwarf iris, roseling, cactus, and wax-myrtle. The easiest way to grow most of the other species from this area would be in a bog garden, utilizing a container such as a child’s wading pool, wooden tub, constructed bed, or other container that can hold some water but not create a pond. I create such a bog by building a box made of 2 feet x 8 feet (about 0.6 x 2.5 m) treated lumber and lining with a rubber pool liner and punching a few holes in the bottom for drainage. The soil mix is half Canadian peat and half clean sharp quartz sand (such as sandblasters sand or pool filter sand). This could be in sun or part shade, depending on your location and afternoon sun intensity. The habitat in the wild is under longleaf pines – not full sun but not much real shade. You could add some nutritive organic matter to the mix, such as leaf mold or loamy soil, but keep it mostly peat and sand. These plants do with with limited nutrients. The key is the moist-but-well-drained soil, as in a bog garden. I have had luck with Kalmia (formerly Leiophyllum) buxifolia in such situations. Some of the species, such as Fothergilla, Rhododendron, Lyonia, and Eubotrys, can take a more “normal” soil, acidic with extra moisture-holding material or extra water as needed. Kalmia cuneata would be the challenge, and (based on failures) I believe the bog “soil” to be the perfect medium.

At the NARGS national meeting in Raleigh, North Carolina, in November 2017, the two-day pre-conference field trip, which I will lead along with Will Stuart, will visit appropriate sites in the Coastal Plain to see these species and many others of the region.

I would like to thank Brady Beck, staff naturalist with the North Carolina Game Land program and Will Stuart of Matthews, North Carolina, naturalist and excellent photographer (see his photos at https://www.flickr.com/photos/willstuart), for help in finding this unique Sandhills site and helping make it accessible. 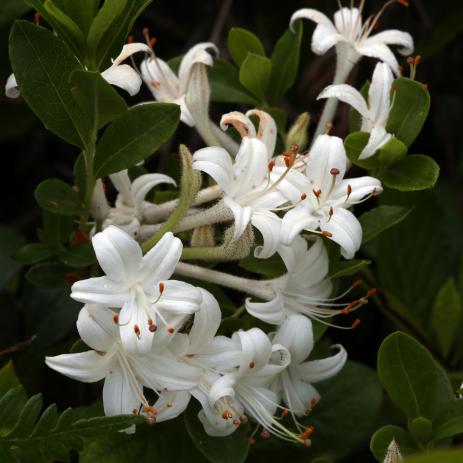