ROCK GARDENS USUALLY remind us of dry plant communities rather than plants for moist or even wet sites. However, though the stone surfaces dry out quickly, they also reduce the substrate’s evaporation enormously. Just under the upper stone layers and in deep crevices there are often permanently moist or even damp conditions that can be recreated in a damp rock garden.

Particularly in the mountains, rocky shores of lakes or streams are populated by diverse, partly dwarf plants, such as marsh marigold (Caltha palustris), various primulas or ferns. Along running water, the nutrient supply is better than in still water, since absorbed ions are continuously replenished by the water movement, and different plants are found around moving or still water. For example, globe flowers (Trollius europaeus) thrive best in wet meadows with some underground water percolation, while cotton grass (Eriophorum angustifolium) thrives with less water movement.

Other moisture demanding alpines originate in oligotrophic (low nutrient) bogs, fens, hillside springs, waterfalls, and on fine screes which have permanent moisture at a shallow depth.

Rocky sites with extended snow cover allow only a few weeks of active growth, constantly watered by melting snow. In the garden, plants from these areas, such as Soldanella or dwarf willows (Salix reticulata, S. alpina, etc.) must be kept permanently moist and planted where they are not exposed to intense summer heat.

At high altitudes, there are many plants that grow on rocky sites and have leaves with dense, silvery hairs or a wax layer. We often interpret this as an adaptation to dryness, but such traits can also serve as a protection against high ultraviolet radiation, strong winds or sudden fluctuations of temperature. Many Leontopodium species, for instance, need permanent moisture in spite of their greyish garment and will rapidly wilt in dry conditions. Plants colored silver, greyish-blue or even brown-red are very common in the flora of the southern hemisphere. Well known examples are sedges from New Zealand such as Carex buchananii, C. comans or C. testacea. Numerous Celmisia species even grow in bogs. In the South African Drakensberg mountains Crassula setulosa subsp. setulosa thrives on rocks which are periodically overrun with water in summer. In cultivation, however, they need protection from moisture in winter, as do Rhodohypoxis, Hesperantha, Helichrysum, Eucomis and Gladiolus species.

Streams and Waterfalls in Rock gardens

Facing the topic “damp rock gardens” most readers will think of streams and small waterfalls within rock gardens. Along narrow streams, only small growing species can be planted to ensure an unhindered water flow and avoid completely obscuring the stonework. Suitable examples are primulas of the farinosa section, such as Primula rosea or P. frondosa. Both are relatively long-lived, unlike P. farinosa and many other species from this section. The rare Lake Constance forget-me-not (Myosotis rehsteiner) is also best located at a stream, even if periodically inundated. In spite of its tiny growth, it needs good nutrient levels, which are supplied by running water. Small growing fen grasses, such as Carex viridula, Schoenus ferrugineus or Trichophorum alpinum are only rarely traded, though they would work well along rock garden streams.

In the water itself, Nymphaea tetragona is suitable if a permanent water level of four to eight inches (10 to 20 cm) and slow water flow can be guaranteed. It prefers cool sites in summer, and can survive only mild winters. But even if it is killed by harsh winter frost, it often populates shallow water features over years because it produces fertile fruits and seeds germinate readily in spring. So does Baldellia ranunculoides which stays small and compact, unlike most other submersed hydrophytes which grow too rampantly for small garden streams.

Stone-crevice ferns can visually enhance a waterfall. Asplenium trichomanes stays compact and propagates only a little by its spores. In contrast, the hart’s tongue fern (Asplenium scolopendrium) can become bothersome through busy self-seeding, even conquering apparently dry rock garden areas.

Adjacent to small ponds, which are framed by stone settings, you can grow wetland plants. Here rather tall species from wet alpine meadows, such as globeflowers (Trollius spp.), primroses (Primula, candelabra section) or even Ligularia are suitable. Usually, the edge of the pond liner protrudes a little above the soil surface as a capillary barrier to prevent water from being drawn out of the pond into the garden substrate. Along this capillary barrier plants must be selected carefully since the substrate can immediately change from soggy to dry. Some plants can thrive under both conditions, such as Allium suaveolens, A. schoenoprasum (chive), A. angulosum, Liatris spicata, Zigadenus (Anticlea) elegans, Caltha palustris and some orchids (i.e., Dactylorhiza hybrids) can conceal the capillary border effectively.

There are also some plants that resemble wetland vegetation though they come from dry sites. Such ideal companions along the capillary border outside of the water body include Iris sintenisii or I. illyrica, Carex montana, compact Geranium, Heuchera cultivars or dwarf hostas.

In small gardens, on balconies or patios, miniature rockeries in troughs are popular. Adequately sealed troughs can become miniature bogs and fens. Put some pots upside down along the trough’s bottom and cover with substrate to a level an inch or two above the pots. For alpines the substrate should be mineral, but bog and fen plants can grow in peat or wood fiber substrate. The inserted pots work as hidden water reservoirs to keep the system damp long-term.

Rock Gardens as a Filter for Natural Swimming Pools

The water in contemporary natural swimming ponds is often equipped with a quickly percolated filter body, which should not be planted. The purification of the circulation water is performed by a biofilm, which grows on the surfaces of the filter substrate grains. Plant roots could disturb the water percolation through the filter body and thus reduce the biofilm’s effectiveness.

If enough space exists, a slow or intermittently percolated filter zone can be sufficient for water purification. In such a “slow filter” not much biofilm will grow to absorb nutrients, so it should be combined with a densely planted underwater zone. Also, the slow filter’s surface itself should be planted since the roots can prevent clogging, which is no problem in quickly percolated systems.

Through trials and pilot projects at Anhalt University in Bernburg (Sachsen-Anhalt, Germany) as well as in a private garden such filters were constructed as percolated rock gardens with a diverse alpine planting. Two possible applications are presented here.

With a permanent water percolation, a nutrient absorbing biofilm can develop in the filter. To construct this type of filter, a liner was placed tightly above the four terraced basins and covered with a protective membrane. The inlet pipe runs through the upper basin. Each basin was filled up with filter substrate. Once constructed, a rhyolite stone rock garden was built over the filter. The parallel position of the stone flags merges into a crevice garden, which frames the artificial mound. This was designed by the Czech rock garden expert Zdeněk Zvolánek.

This construction type is suitable as pre-filter of the refilling water of natural swimming pools. Of course, it also can be combined with a garden pond or a simple basin. To construct this type, a naturalistic crevice garden was built using rough rhyolite stone flags arranged in a steep, slightly diagonal setting, which clad a percolated sand core. Controlled by a time switch, about 20 gallons (80 liters) of water per hour run through a drip pipe along the ridge. The water percolates through the sand core, passes the gravel under the pavement and enters the natural pool. This keeps the water level almost constant.

A diversity of moisture-demanding alpines thrive perfectly on such percolated systems. In the continental influenced dry climate of Bernburg with less than 20 inches (500 mm) rainfall per year, in a typical rock garden stemless gentians (Gentiana Acaulis Group) are not vital and bloom poorly. But on the rock garden filters, they grow lush and vigorous, flower heavily in spring and rebloom in autumn.

Somewhat troublesome is the spontaneous occurrence of ferns. Even in the gaps of the south side Gymnocarpium dryopteris and Asplenium scolopendrium sprout blithely though never being intentionally planted. Of course, this is a nice problem to have.

The table on the following page lists plants which have been proven suitable on the percolated rock gardens. The table lists numerous species which usually are not recommended for damp sites but have proven as suitable on percolated rock gardens in a purely mineral substrate and on permanently moving water. Lime-intolerant species, such as Wulfenia spp. or Polygala chamaebuxus may show iron deficiency symptoms even if the water has only a moderate carbonate content (hard water). Feeding the plants a solution of Fe-EDDHA (Basafer® or another chelated soluation) two or three times during the growing period provides relief. Many alpines require more nitrogen than expected, even dwarf growing ones. Pouring a low dose solution of urea can help and keep the plants appropriately green.

Editor’s note: Many of the principles and ideas in this article come from and are further expanded in Wolfram’s book How to Build a Natural Swimming Pool: The Complete Guide to Healthy Swimming at Home. 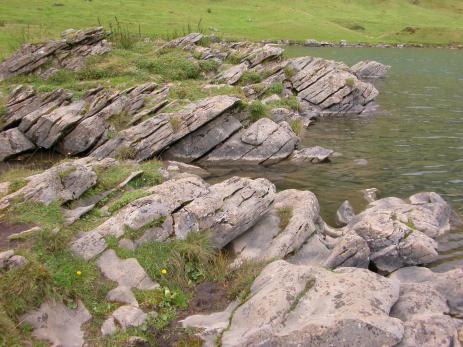