IN THE SEVERAL years that I’ve lived in North Carolina, I have spent only a little time exploring the varied natural areas found throughout the state. But recently, I visited one of these areas, the Croatan National Forest in Carteret County in the eastern part of the state, to see some of the most unearthly of plants—plants that “eat” rather than are eaten.

Late May and June bring on the flowers of the most famous carnivorous plant, Dionaea muscipula, the Venus flytrap. I ventured along Pringle Road, north of Cedar Key, where I had read that populations of the federally protected plants still prospered in the most northeasterly part of their range in the relative wilderness of the longleaf pine savanna. Controlled fires lit periodically and the occasional blaze from a lightning strike provided the open habitat needed by Dionaea muscipula and other carnivorous plants growing in the seasonally wet depressions in the expanse of pine savanna. Driving along Pringle Road, stopping periodically when a spot of color from wildflowers or blackened brush from recent burns caught my eye, I managed to locate one of the populations of these hungry plants.

In a recently burnt area, remnants of brush resprouting leaves revealed the identity of some of the overbearing neighbors of the little carnivores. Young leaves of Vaccinium, Lyonia mariana, and Clethra alnifolia emerged from the bases of charred twigs, preparing to retake the open ground once covered by their vegetation. Meanwhile, Dionaea muscipula took advantage of this open canopy to flower and set seed while the good times lasted. Small clusters of ¾-inch (2 cm) white, five-petal blossoms stood atop 8–12 inch (20–30 cm) scapes, rocketing from 3–4-inch (10 cm) rosettes of fresh green, miniature bear traps growing among the charcoaled stems and venturing into the nearby Aristida stricta (wire grass). The grassy foliage of Stenanthium densum also took advantage of the new-found sunlight to erect its own tall raceme of white, six-tepal stars with protruding stamens tipped in burnt ochre pollen. Other neighbors in this location included Sphagnum; a wiry, pastel blue colored Lobelia nuttallii; florescent orange-flowered Polygala lutea; the prostrate marching stems of Vaccinium crassifolium; and the fragrant foliage of Myrica cerifera var. pumila.

Another trip into the Croatan in search of predatory plants came in early November. John Henderson, an amateur nature photographer from Cedar Key, promised to show me at least six of the resident carnivorous plant species growing only a few miles from his home. With his topographical map of the southeastern Croatan in hand, we jumped into his Jeep and drove up Pringle Road. His map detailed locations previously found and noted with mileage marks and descriptions of what one would find at each. Only a few hundred yards beyond my own May discovery, we stopped to see another location offering a home to Dionaea muscipula.

Walking a few hundred feet off the road through a thin scattering of Pinus palustris and passing tufts of Liatris, as well as a few plants formerly known as Aster and young shoots of Arundinaria gigantea, we came upon an area where low depressions or ruts allowed for moister conditions than that of the surrounding open pine savanna. With close inspection, John began pointing out nickel- and quarter-sized rosettes. Tiny, pale green, tennis racket-shaped leaves covered in red hairs tipped in orbs of sticky glue sometimes held minuscule arthropods trapped in the adhesive jewels: Drosera capillaris, the first of three sundew species found that day. Upon even closer inspection, a second species, Drosera brevifolia, began to appear. The largest rosettes growing only to the size of a nickel and sticky, red, ping-pong paddle-shaped leaves nearly lacking petioles helped to distinguish these patient hunters. Pale yellow mats of Sphagnum in places surrounded the tiny, red rosettes of Drosera, highlighting both plants in this unique habitat. Sometimes only inches away, hiding at the base of clumps of grass, with green rosettes of leaves tipped in blood-red jaws, Dionaea muscipula waited for the unsuspecting insect prey to land and trigger the leaves to close.

A few feet further, on slightly higher ground, a disheveled, deep purple-blue blossom of Gentiana autumnalis stood out like a beacon from the surrounding tan blades of Aristida stricta. Scanning the area for other interesting plants, my eyes brought into focus another tiny jewel. A single, glossy yellow flower of Utricularia subulata glistened atop a wiry stem poking up from a patch of bare ground, marking the presence of a subterranean network of trapdoors waiting to capture minute worms and invertebrates in the moist soil. Yet another predator of sorts grew in this location as well. Pink, ½-inch (1.25 cm), trumpet-like blossoms held on wiry branching stems hid the thieving nature of Agalinis aphylla. Agalinis, a genus of hemiparasites, preys on other plants, tapping into their roots to steal nourishment, but is not totally dependent on them as the plants themselves can still photosynthesize. This location also contained the creeping Vaccinium crassifolium, a late flowering Polygala lutea, and resprouting Gordonia lasianthus.

After spending thirty or forty minutes at that location, John and I got back into the Jeep and traveled about two miles to our next stop on Millis Road. Climbing up a low bank into another open pine glade brought into view a depression about 300 feet long by 40 feet wide (about 90 m x 12 m), spotted with traps of water-filled Sarracenia. Two species grew in the perpetually wet soil, the most apparent of these being Sarracenia flava. Hundreds of now-browning, 18-inch (46 cm) tall, trumpet-like, tubular leaves stood among the grasses and other bog plants. A few still showed the summer’s chartreuse tubes with varying degrees of burgundy red veins radiating up the leaves and onto the hood, still waiting for unsuspecting insects to venture into their water trap. Scattered around, remnants of parachute-like seed heads were only memories of the bizarre, yellow, spring blossoms. The second species, Sarracenia purpurea, formed several patches near its taller cousin. The dense clusters of 6-inch (15 cm) tall, green-veined, red pitchers appeared fresh as spring, despite the fall appearance of Sarracenia flava. One loner flowered, holding a red spaceship-shaped blossom on top of a 10-inch (25 cm) scape.

Looking beyond the very apparent Sarracenia, John again pointed out the tiny rosettes of Drosera. Two species grew in the small open patches of the boggy soil. Drosera capillaris, with the tennis racket leaves, grew here as it did in the previous location on Pringle Road, but it was joined by the third species of the day, Drosera intermedia. The leaves of D. intermedia grew longer, thinner petioles and appeared more like a badminton racket than the tennis rackets of D. capillaris. Also, the rosettes grew to an enormous quarter- to fifty-cent piece size.

Growing alongside Sarracenia and Drosera, the versatile Coreopsis gladiata sent up a few thin, 10-inch (25 cm) stems topped in 1½-inch (3.8 cm), golden yellow daisies with a dark brown center. In the muck of the bog, pipe cleaner stems of a Lycopodiella maneuvered their way around the clumps of grasses and Sarracenia. In the middle of the almost entirely herbaceous community of this bog, a solitary clump of Myrica cerifera anchored the wet soils. A few small clumps of bushy, glossy black-fruited Ilex glabra were the only other woody to venture in to the wet expanse. On the bank of the depression, pale blue inflorescences of Ionactis linariifolia loosely covered the open, needle-like foliage of the 8-inch (20 cm) tall plants. On the relative high ground, a lone Gentiana autumnalis held an unblemished blossom of a rich blue funnel with a white throat brushed with mashed-pea green and flecked with speckles.

As John and I prepared to leave, I looked down and noticed the late flowers of a spiral orchid. The leafless, 8-inch (20 cm) tall stalk held nine white blossoms on a twisted stem. We would later find out that this orchid, Spiranthes longilabris, which was identified with the help of several people in the native plant community, happened to be federally endangered and had not been recorded in Carteret County.

I found remarkable the number of familiar garden plants growing within sight of the carnivorous plants that I had gone to see. Myrica cerifera, Clethra alnifolia, and Ilex glabra connected the plants in our gardens to the wild predatory plants’ world, strange neighbors that one would never expect to see cohabitating within our own gardens. Others, like the recovering Gordonia lasianthus, challenge the gardener to grow them in conditions like their inhospitable home in the intermittently wet/dry pine savanna, where they flourish despite recurrent fires. Within several yards of these two locations, other familiar landscape plants grew not in the lush ways we are accustomed to in our own yard, but as wild, hardy cousins, able to take the stressful conditions found in the pine savanna. The ubiquitous Ilex vomitoria, Pinus taeda, and multiple species of Quercus were growing as scrubby shrubs to 40 foot (12 m) trees. Pinus palustris, though less common in landscapes, provides the main canopy of the surroundings where some trees, I have read, are over one hundred years old, though their smaller size makes them look much younger due to the extreme conditions of the savanna.

Carnivores in the Garden

The many bog-dwelling carnivorous plants are beautiful and interesting additions to the garden and, provided with the right conditions, are easy to grow. Most, despite their warm native habitat, are cold hardy to zone 6 or even 5. To make a home for these plants, you can create a bog using a plastic tub sunk into the ground or a rubber pond liner. Drainage holes put a couple of inches below the soil surface will produce the wet but not saturated conditions these bog plants require. Alternatively, you can set a container in a bowl or dish that will hold water and keep your container wet. Fill the bog garden with peat or a mixture of peat and sand to ensure the highly acidic conditions these plants are native to and then keep it watered using rainwater whenever possible, as most tap water is alkaline and will raise the pH. 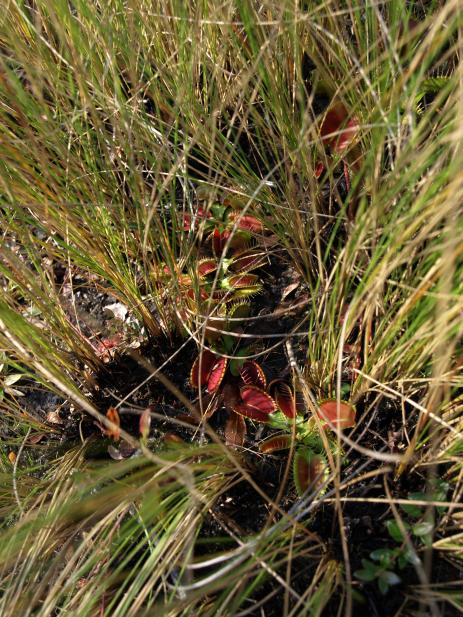