ALTHOUGH MANY INDIVIDUALS have helped forge the Czech rock garden renaissance, none has been more visible in both creating and proselytizing the Czech crevice garden style, as well as exploring for seed, than Zdeněk Zvolánek. He has been dubbed “Zed Zed” in Britain by those intimidated by the Slavic pronunciation of his distinctive name. By whatever name, few more charismatic figures have appeared in the art of rock gardening since the equally charismatic and even more eccentric Reginald Farrer flourished a century ago.

I was fortunate to have first contacted Zdeněk in the mid-1970s when we began exchanging letters and seeds. We first met face to face in Britain in 1981 where we both attended the International Rock Plant Conference in Nottingham and hung out together at that event. That is when Zdeněk informed me he’d be visiting me in September of 1983. Judy Glattstein of the Connecticut chapter of NARGS helped make that visit a reality: she and I both persuaded our respective chapters to cover the cost of his trip as a speaker and Zdeněk and I subsequently spent two weeks exploring for plants and seed throughout the Colorado Rockies and Utah steppe. For many years afterward, his letters were signed with a flourish: “Desert RAT.”

Zdeněk returned to North America regularly since that time while his partner Joyce Carruthers was alive. Zdeněk and Joyce were partners in life and work, and commuted annually between the Czech Republic in spring, Turkey in summer, and Joyce’s home bases in Wales and British Columbia at other times of the year: an enviable lifestyle! My relationship entered a new phase when Zdeněk and Joyce spent several weeks constructing an ambitious crevice garden at the Mount Goliath visitor center for Denver Botanic Gardens in 1998. They subsequently returned in July, 2010, to keynote the North American Rock Garden Society’s Annual General Meeting in Salida, Colorado. Not long thereafter, Joyce died in a tragic traffic accident, and Zdeněk’s visits have lessened, although he’s planning to revisit the North American West this summer with his new companion, Zdena.

Zdeněk has become a regular lecturer throughout Europe and has built numerous ambitious rock gardens in England (including a large crevice garden at the Royal Horticultural Society’s garden at Wisley). He’s also built many gardens across Europe in Denmark and Germany, as well as continuing to be a leader at home in the local societies of the Czech Republic. He also edits the International Rock Garden Journal with Ian and Maggie Young: a spectacular online magazine produced under the auspices of the Scottish Rock Garden Club.

I have watched Zdeněk’s remarkable productivity with amazement, hoping to find an opportunity to view the “Czech phenomenon” firsthand in his homeland itself. In the spring of 2017, I finally had my chance when Vojtěch Holubec and Zdeněk extended an invitation to me to participate in the Third International Rock Garden Conference at Pruhonice, Czech Republic, amid a vast park in an outstanding venue for conferences not far from Prague.

My week-long sojourn in the Czech Republic exceeded my fondest expectations. Of course, the magical setting near a castle at Pruhonice did not hurt, nor the unblemished sunny spring weather. The companionship of well over 100 keen rock gardeners from all over the world and stimulating presentations enhanced the experience. But the centerpiece was certainly the opportunity to visit nearly a dozen spectacular private gardens during the week, and the few hours spent at Karlik, the village where Zdeněk’s private garden is found, stand out for a variety of reasons.

The steep hill where much of Zed Zed’s garden is perched was in peak bloom during our visit. There are small rock gardens along the road in front of his house, but the real extravaganza is in the back of the house—a seemingly sheer cliff perhaps sixty feet tall, and a terrace above with yet more cliffs rising beyond. The cliff is limestone: a large outcrop of the Karst formation that underlies much of the Prague region—a perfect medium for growing lime-loving alpines in cooler aspects. Western American xerophytes thrive on the hotter aspects, as do a wealth of Mediterranean bulbs and buns. Fortunately, in real life, the path climbing the cliff is not as intimidating as photographs imply! The timid will be relieved to know there are extensive level beds on the terraces. You’re not required to use ropes and pitons on your visit although I do believe Zdeněk has used them to plant and weed some of the steeper bits in the past.

The crystalline day with scudding clouds in the azure skies combined with the rolling Czech countryside stretching beyond provided a fantastic backdrop. The contrast of distant views, the dozens of intimate vignettes and the crowds of enthusiastic visitors stretched along the pathways made for an unforgettable visit. Hopefully, the small subset of pictures selected to illustrate this tribute to Zdeněk the gardener and the man will give a taste of his lifetime’s achievement on this cliff-like garden.

A few things ought to be mentioned: Zdeněk commenced work on this garden as a youngster. Karlik was his parent’s country home he would visit on weekends once he’d launched his career as an architect and lived in Prague with his wife. He was never around for great lengths of time, so any plants he put here had to fare on their own after they’d been planted. Even now that Zdeněk lives “full time” in Karlik, he spends a great deal of time away on tours and plant exploration—the garden is designed to coast on without his constant attention.

There are bona fide alpines tucked into cooler microclimates—primulas, various gesneriads, saxifrages, and androsaces—that demand shadier, moister conditions to grow in Karlik. But most of the highly exposed, sunny hillside is planted to lower elevation alpines and steppe plants that can withstand the extended warm, dry spells that occur every summer here. A robust mat of Eriogonum caespitosum, for instance—as good as any I’ve seen in the intermountain west! Lewisias galore and many penstemons made me feel right at home as a U.S. westerner.

He has encouraged many of these to spread and self-sow, to help cover the extensive cliffs and broad slopes: a tiny crevice garden of only miniature alpine gems would be untenable on a garden of this size and scope. Nevertheless, there are still many little gems that find their nooks and crannies throughout.

An eloquent take-home I learned from visiting Karlik was to grow as much in your garden as will take your conditions naturally. There is a vast assortment of rock garden plants to draw from, and all of our gardens can provide conditions for a great many of these to grow easily--not needing a lot of coddling. To specialize in what likes your climate and grows best with your soil, your exposure, your conditions—this is what is likely to produce the most gratifying results for you in your garden and for your garden visitors.

Zdeněk’s garden is quite enormous—and if he had not followed this path of practical plant selection, it would be overwhelming to maintain. Instead, he can focus his energy on combining plants in the most attractive ways, and all manner of subtle, elegant decoration throughout.

Sempervivums and sedums are usually regarded as “too easy” for sophisticated gardeners, but Zdeněk has used these and other “common” plants to great effect, provided intricate interest on otherwise stark rock faces, knitting shattered rock into a meaningful pattern.

He has used a wide variety of mat-forming plants like Pterocephalus pinardii and a wealth of tiny dianthus to cover expanses of ground, as well as dwarf woody shrubs like genista and daphne which love his conditions. These meadow-like expanses of dense plantings have kept down weeds—I don’t recall seeing a single weed during my visit! For those of us who grow most of our alpines in the ground rather than alpine houses, this rich and varied garden is a vindication. Traveling as he does, there’s no way Zdeněk could take care of a large collection of plants in pots. But growing in the ground and on rocks, they coast on cheerfully.

Remember that all these pictures are a tiny fraction I took that magical May day in Karlik. And if you consider that an incredible array of flowers preceded our visit for months, and would continue through the summer season, this is an action-packed garden! I hope to visit again in other seasons of its bloom. I can’t think of another private garden combining so many elements as artistically!

The Czech revolution in rock gardening that’s taken place over the last half-century has touched everyone who attempts to grow alpines in rock gardens. Crevice gardens have cropped up in troughs, in practically every major public rock garden, and in more and more private gardens. This is occurring as gardeners seek to emulate the fantastic images published of gardens such as Ota Vlasak’s near Prague, or the Prague rock garden club’s famous rock garden show around the Church of St John on the Rock in that ancient city. More and more rock gardeners have made a pilgrimage to the Czech Republic and Slovakia to see the ambitious crevice gardens there—and three international rock garden conference have been staged thus far in that country. In addition to innovative garden design, a dozen or more Czechs have fanned across Eurasia annually collecting an extraordinary range of continental alpines and steppe plants new to cultivation. And Zdeněk, more than anyone, can take credit for shepherding our art onto rich new pastures. We salute you, Master! 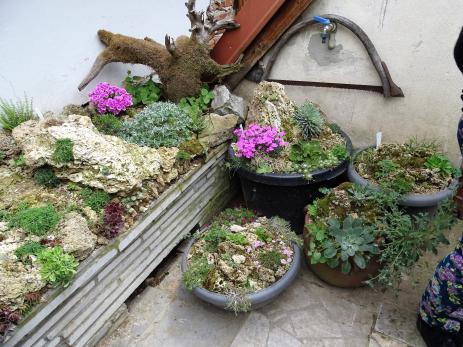