Skip to main content
Is That a Conifer in My Rock Garden or a Rock in My Conifer Garden?

Gardening—or horticulture if we want to be tonier—is an applied science and lends itself to imprecise terminology.  Add to that the fact that most of its practitioners are hobbyists and self-taught, then cap it off with regional differences, and it is not surprising that definition and even translation is sometimes required for successful communication. The question “what is a rock garden?” is one that produces different definitions depending on who answers your query.  I hadn’t even considered this question until the rocks in my garden took on a life of their own and forced me to take them nearly as seriously as I had the plants!

I am a self-confessed conehead, a term that conifer lovers use to describe their affliction. But it wasn’t always thus; I am a reformed perennialista who wearied of the maintenance, lack of structure and long off-season that are the unsavory attributes of those pretty perennial faces. I found a lasting romance in the bold structure, year-round interest and low-maintenance of dwarf and miniature conifers. Today my garden is about 50 percent conifers, with the remainder companion plantings of interesting woody plants and large succulents.

As part of my desire to reduce the maintenance in my large garden and create a landscape with year-round appeal, I began to add rocks to my plantings.  A large boulder here, a group of smaller rocks there and before long I was a huge fan of rocks in gardens. Why not? No watering or fertilizing necessary, no chance of them dying or even sickening, and they will never outgrow their spaces.  I also came to appreciate how the use of rocks could help create a vignette using smaller plants than I might have thought to use singly. In a large garden, it can be difficult to use the smaller conifers, those classed as miniatures. A miniature, by the definition of the American Conifer Society, is one that grows less than one inch (2.5 cm) per year and is under a foot (30 cm) tall after ten years. There are some fabulous miniature cultivars that I had ignored because I thought that they would simply get lost in my vast landscape.

So I added more rocks to the garden, and was pleased with the interest they created and the additional plant choices they allowed. I realized that I was going about it backward: I needed to put the rocks in first and then add plants appropriately. So, I chose a site on the edge of the garden that was big enough to create a harmonious collection of rocks, in fact, a rock garden.  I wanted it to slope slightly for drainage and also to face south so that I could do a bit of zone-pushing (I’m USDA 9b; we sometimes have mild freezes). Once I selected the site, we yanked out the uninteresting plants and transplanted the desirable ones to other spots.

As I was working on this plan, my husband and I both had milestone birthdays and a milestone anniversary. When he asked me what I wanted as a gift to celebrate, I responded without hesitation: “Big rocks.” He gulped, and I explained that we were taking a trip not to Tiffany, but to the landscape materials yard. However, I still wasn’t sure what I wanted this rock garden to look like, so wasn’t sure what kind of rocks to buy, or how many.

I googled “rock garden” and learned that most rock gardens showcase alpine plants. That stopped me for a bit, as many alpine plants would not thrive in my Sonoma County, California, location and were not (yet!) part of my plant palette. Alpines are adapted to growing in harsh conditions, with cold, dryness, and a short growing season. They also grow in an environment that does not support trees, so woody plants are not naturally selected as rock garden denizens. This meant that I could not easily look to photos of typical rock gardens to give me ideas of what to plant or how to arrange the rocks. I had Dan lined up to create the garden, but I didn’t know what I wanted it to look like.

The adjective “alpine” kept rattling around in my head, and I realized that while in its narrowest sense, it referred to high mountain regions and the endemic plants and animals, “high” isn’t necessarily defined as above the tree line. I also knew that many conifers are native to mountainous regions and that conifers and rocks seemed to complement each other naturally. So, for inspiration, I drew on my impressions and recollections of the trips that I had taken to view conifers in the mountains of California. Relative to many of the more traditional alpine gardens, this meant larger rocks, but I learned that often the best rocks to use were those that were close at hand, due to ease of transportation and the aesthetic advantage of using native material. I also learned that angular rocks were easier to place than round ones and that rocks with interesting crevices and hollows, or decorated with lichen or moss, were desirable. This gave me enough focus so that Dan could start choosing rocks, in this case, Sonoma fieldstone, and we eventually ended up with about 25 tons. Dan was also a veteran hiker, and when I suggested that he arrange the rocks to resemble the landscape in the high Sierra Nevada, he went to work and laid out the bones of the garden.

Then came the fun part for me: planting the rocks! I focused primarily on conifers, bromeliads, cacti, succulents, and Australians, as these all grow well in my zone and from this group I can get a wide variety of forms, textures, and structures. I loved placing the smaller conifers and their companions in niches and pockets, allowing some to occupy places of importance atop a mound and tucking others into crevices that protected them from wind and frost. And strangely (or maybe not), many of the succulents that I selected mimic the growth habits of some of the alpines, growing low to the ground and trailing over rocks.

It’s been a little over a year since I began rock gardening, and since the rocks are mature the day they hit the garden, I discovered another wonderful aspect to this addiction: the rocks temper that just planted look that new beds tend to wear. Yes, the initial planting was sparser than it would be in a few years, but the garden had a completeness that most new beds do not have. My rock garden looks attractive, it doesn’t appear incomplete in any way, but many nooks and pockets still await choice miniature conifers that I can now buy with impunity, knowing that I’ll have the perfect place to showcase them. Oh, and by the way, I also joined NARGS!  If you want to learn more about dwarf conifers, consider joining the American Conifer Society, www.conifersociety.org. 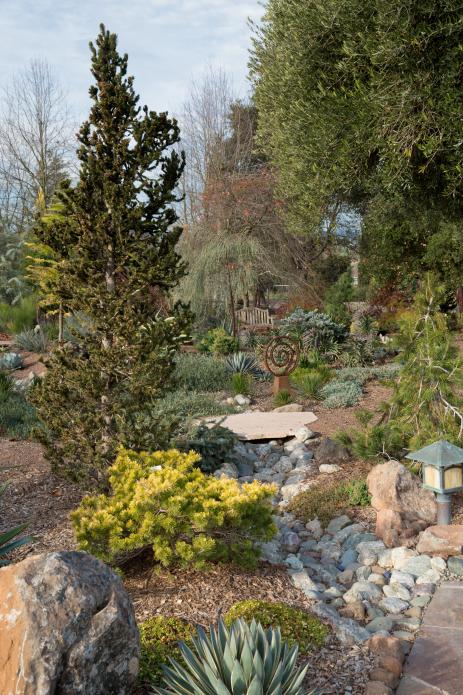