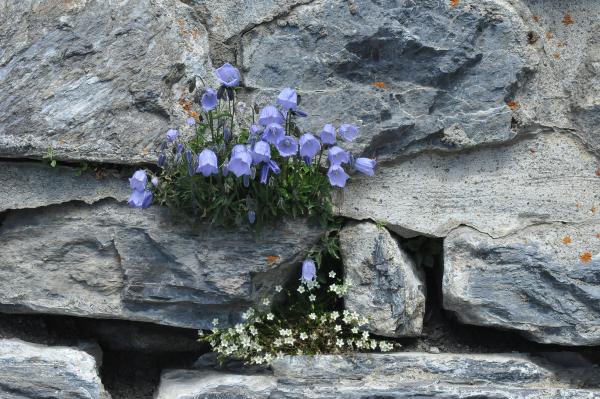 Campanula cochlearifolia is often known as fairy bells or fairy thimbles. It is a European native growing in the mountainous areas of the Pyrenees, Alps and Carpathians. It is a small species, reaching 10 cm, with small almost fan-shaped leaves.  It spreads rapidly by thin, thread-like rhizomes. One to three nodding, mid-blue, bell-shaped flowers are produced atop wiry stems.  In the wild it blooms in mostly in June.  It is also available in white and double-flowered forms.

This is an easy bellflower to cultivate.  In the wild it often grows on limestone but in cultivation it does not appear to be particular about the soil pH.  The soil should be gritty and well-drained.  Full sun to part shade is fine.  It can run with abandon so position it where it cannot impact negatively on timid neighbors.  It is ideal for a crevice garden or trough.  It is hardy to zone 5 but prefers areas with cool summers.

May in the south to early July in the north.

This species is most easily propagated by division.  Dig plants in early spring or after blooming, separating the fine rhizomes.  It may also be grown from seeds directly sown at 20 C.  No stratification is required.