Yes, the title is very intriguing... The area is named after the Uncas Skipper, a butterfly that occurs over a large range of North America, but known only from two locations in Minnesota, both being disjunct from its normal distribution range.  The caterpillar feeds on Blue Brama grass (Bouteloua gracilis) and needle grasses (Stipa spp.).

This SNA (Scientific and Natural Area) is only about an hour's drive north of Minneapolis, and is part of the Anoka Sand plains (http://www.dnr.state.mn.us/ecs/222Mc/index.html), an area left by the last retreating glacial age.  Uncas Dunes preserves a relic dunefield associated with glacial Lake Grantsburg (long extinct).  Natural communities include oak savannah, oak forest, and wetlands.  Not at all "pristine" as most of Minnesota's SNAs are, this SNA is overrun by many exotics, both purposefully planted (half century old pines) and not.  Still, there are floral gems to be seen, and the area does support a few rare native plant species besides the Uncas Skipper.

In fact, it is very clear that area is far from its natural state.  Conventional garden weeds abound here: something unheard of in natural settings.  Things like Fox Tails, Common and Western ragweeds, Carpetweed and sandburs were literally everywhere.

A sea of weeds (mostly Western ragweed and Foxtail) with just a spattering of native prairie flora.    And Carpetweed (Mollugo verticillata) 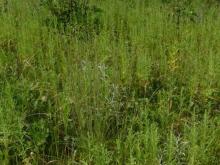 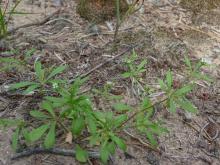 Also everywhere was Poison ivy (Toxicodendron radicans).  At least in my childhood, I was not allergic to this plant.  Still, I always try to avoid contact with it.  Never could I step anywhere without first examining the intended stepping spot to confirm the absence of the poisonous plant.  Often turning my foot at a weird angle to match the space void of posion ivy, I felt like a student of Kung Fu, slowly and deliberately planning each movement.  The hard part was having to retrace my steps several times, backwards, as I often found I could no longer go forward!

While Poison ivy begins to grow as a vine in far southern Minnesota and can grow easily 50 ft farther south, in Minneapolis a 2 ft. plant is considered robust.  Even in the poor nutrition of Uncas Dunes, Toxicodendron radicans does very nicely, and I have never seen better fruiting anywhere in Minnesota.  The name escapes me, but we have a native bird species here that depends heavily on Poison ivy's berries for food. 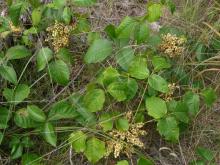 So views of good prairie/savannah habitat are lacking, but the overall feel of the area is pretty typical.  The plant species mix is just "abnormal'. 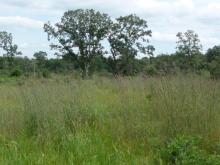 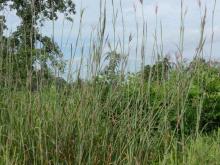 I was there at just the right time to see how a gust of wind gives rise to a temporary cloud of Big Bluestem pollen that would visibly drift downwind.

Leadplant (Amorpha canescens) had just finished blooming, but I did find a few stragglers... 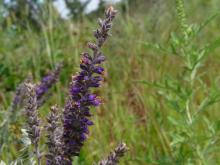 (Western ragweed (Ambrosia psilostachya) is out of focus to the right in this second photo.)

A wild Coreopsis sp. just finishing up, too. 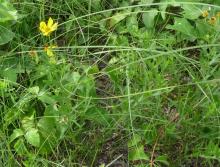 There were two native ground cherries:Physalis heterophylla and Physalis virginiana 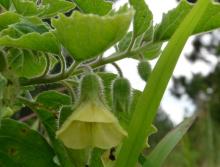 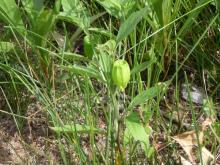 Indian Grass (Sorghastrum nutans) and a one foot high, very sparse and non-flowering (at this time) grass with an interesting star like ligule.  Ligules tend to be an identifying characteristic in grass species.  Any help here? 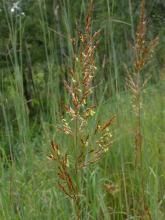 The most beautiful mite galls (I assume) that I have ever seen.  With the color of raspberries, they looked very edible... Very interesting, Rick.  A lot of genera there are not represented here at all, e.g. Lespedeza, Physalis (only tomatillo occurs as a garden weed, oddly enough), Amorpha, Sorghastrum, so it is very educational to see them.  I take it your photos are quite recent?

Thanks for showing these, Rick. Very interesting! Are the Physalis species perennials?

Either I have to get 100 years old or I have to inherit a fortune and quit working! How shall I ever manage to visit all the interesting places on Earth?

The prairie onion looks gardenworthy. Never seen it for sale!

The prairie onion looks gardenworthy. Never seen it for sale!

I might be persuaded to sell you mine if the price is right :)  Otherwise you could wait a couple of years when it will hopefully be dividable....

The Physalis spp. are perennial, and stoloniferous.  P. virginiana was fairly common where I grew up just south of Minneapolis, Minnesota.  Where it did well it grew about 2ft. (60cm) with the typical flat top of other solanaceous species like peppers.  Always single stemmed wherever it sprouted, a colony would cover 50% of an area.  Virginiana flowers are similar to that of heterohylla, but glabrous and a deep, dark chocolate center that encompasses half of the bell.  The pictured Physalis heterophylla is one of the best specimens I saw.  Most were comparatively puny and only around 6 x 12 inches (15 x 30cm) or less.

Allium stellatum is certainly garden worthy (and tasty, too)!  here it is in my garden:http://nargs.org/smf/index.php?topic=274.msg3674#msg3674I will save you some seed, Trond.  It is very vigorous and multiplies quickly for me; and I cut most of the spent flower heads before seed production, since volunteers are too numerous.

Stephen, I think you can have our your (of course!) plant and I say thank you to Rick!

Yes indeed, most interesting, Rick... thanks for posting this interesting topic!  I see my all too common "friend" Toxicodendron radicans, poison ivy among the most common pest plants in New England. You photo brings to mind the variability of the species, the leaves take many different forms and characteristics which can fool some people; it grows vigorously here and climbs tree trunks and fruits well, but I've never seen fruiting like the ones you show.  I'm highly allergic to poison ivy, but invariably I get some on my hands and fingers as I weed, particularly below trees (bird droppings no doubt account for the many seedlings that show up in my wooded areas).  The Google Images link below displays some of the leaf variability, sometimes smooth entire leaves, other times strongly dentate.http://www.google.com/search?hl=en&cp=22&gs_id=3&xhr=t&q=toxicodendron+radicans&qe=VG94aWNvZGVuZHJvbiByYWRpY2Fucw&qesig=z0W20AB9n0DbS1PRkny7kQ&pkc=AFgZ2tm83Fpq-5YZGwuYQvSsvj_teX7FLJiCnaxAUFVCgZWZoKxfSUlarWWvMyuJ1Cpn5WPq_91uJoS_NObGmMWK2ft1H9ssxg&gs_sm=&gs_upl=&bav=on.2,or.r_gc.r_pw.&biw=1280&bih=809&um=1&ie=UTF-8&tbm=isch&source=og&sa=N&tab=wi

The two native grasses you show have handsome flowers, revealed with your close-hand photography.

Glad to see my other true friend, Allium stellatum, you show some variability.  Great shot on the first one with the squiggly pedicels :)  The last photo shows the prominent "crests" on top of the swelling capsules, one of the hallmark characteristics of this species and the closely allied A. cernuum.

The poison ivy leaf shape I show is typical of the native Minnesota phenotype:  they are usually entire, and sometimes with just the tiny bit of of jag to the leaf edge.  I don't know what more westerly forms are like, but I have seen examples of more easterly forms, and the coarsely toothed leaves are really quite pretty.