St. Cloud is a city in central Minnesota, about 80 miles north of Minneapolis.  Quarry Park is actually a city park, a re-naturalized area set aside for hiking and picnicking.  Quarry Park SNA (Scientific and Natural Area) is adjacent to it and remains a wild area.  Both the Park and SNA sit atop granite bedrock, and in the city park it was mined in the mid part of the last century (hence its name).  While the Park contains much deeper soils, in the SNA the bedrock is never more than a couple feet under the surface of rich loam.  Consequently, outcrops of granite emerge now and then, and provide niches for plants not normally found in the area.

With the normal water table relatively high, both wet and dry ecosystems naturally occur.  The bulk of the Park and SNA is forested with a mix of native hardwoods, but mostly Red oak (Quercus rubra), Northern Pin oak (Q. ellipsoidalis) and Bur oak (Q. macrocarpa).  It was interesting to note that a couple strong windstorms blew through the area in the last month, and in late August I saw at least a dozen large - 2+ ft in diameter - Red and Northern Pin oaks blown over, but not one Bur oak was uprooted.

When you don't have your own map to go by, its a good idea to take a digital photo of the one at the entrance, just in case. 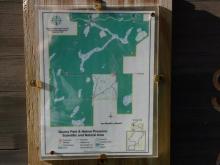 Though Corydalis sempervirens occurs farther south as one travels east of Minnesota, this is about the southern reach of the species in the state.  This corydalis is a biennial. 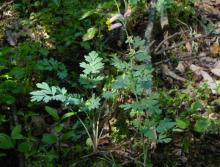 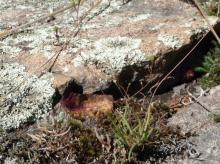 Harebells (Campanula rotundifolia) is common throughout Minnesota, as is our "good" friend Poison ivy (Toxicodendron radicans). 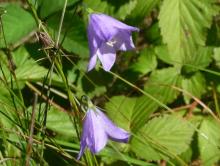 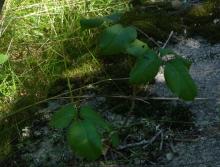 Woodbine (Parthenocissus vitacea) grows a little differently then the closely related Virgina Creeper (P. quinquefolia) that abounds to the south.  The berries show the slightest hint of the blue that is to come. 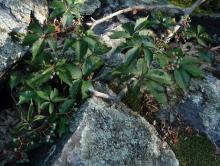 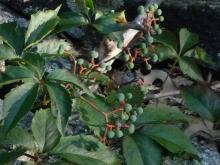 Bluets (Houstonia longifolia) retreat to a small little tuft of leaves in the late summer, while comparatively long flower stalks seem disjunct to the plant.  Most were done flowering, but a few  blossoms linger. 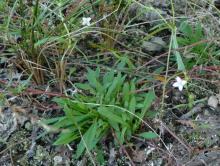 Forked Three-awn grass (Aristida basiramea) finds its home in  very shallow topsoil over bedrock crevices.  It is a species of needle grass.  the seed heads are not mature yet, but it is easy to see the awns that spread almost horizontally atop each vertical seed.  Only visible upon close inspection, each awn is forked  near the origin, at the seed apex. 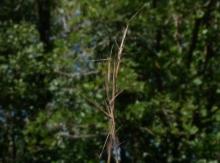 Blue Giant hyssop (Agastache foeniculum) isn't very giant here, about three feet tall, but is a non-aromatic variant with very shiny leaves.  Even in late summer, the leaves look as fresh as ever. The typical (if there is such a thing as typical) messy look of a prairie.  Of course you can see the Agastache, but also discernible in the photo is Big Bluestem (Andropogon gerardii) and Leadplant (Amorpha canescens). 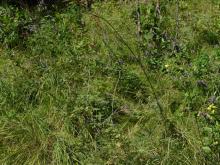 It is not uncommon to find Round-headed bushclover (Lespedeza capitata) no longer vertical due to the weight of its seedheads. I am not sure what the preferred habitat of Blood Milkwort (Polygala sanguinea) is, as I found it in part shade moist areas with other plants of similar height (8-10 inches) and hidden among 2 ft grasses and forbes in full sun. I had never guessed that the last one was a Polygala! It is very different from the species I am acquainted with.

There are a number of Polygala species that have flowers resembling clover heads... it's an interesting genus containing some drastically different plants, many are inconspicuous weeds, some wonderful alpine or rock garden gems, and intricate shrublets.  I haven't seen this one before, attractive heads, but look at those thorny stems!  Remember, I did post a photo of a spiny Polgala from Utah here:http://nargs.org/smf/index.php?topic=567.msg6150#msg6150

Rick, glad to see a good photo of Houstonia longifolia, it's one I only know from books.

I used to have Corydalis sempervirens natively in parts of the yard, but it has disappeared in recent years.  I realize that it's just an annual or monocarpic, but I always liked the pink and yellow flower color and attractive blue-gray foliage.

"Thorns" on the polygala are only bract like appendages from the flower as it continues to ascend as it grows.  I can't believe I never even touched them to see if they were stiff.  They certainly looked very soft.

A couple more from the SNA:Common boneset (Eupatorium perfoliatum) In the city's park adjacent to the SNA, a few more plants that may be of interest...

American Hog-peanut (Amphicarpaea bracteata).  The plant produces two kinds of seeds:(1) From cross pollinated flowers that produce normal leguminous seed pods with a few seeds per pod.(2) From cleistogamous flowers that never open.  These flowers are produced low on the vine or underground.  Those produced on the vine later bury themselves like real peanuts.

Both are edible, and I have eaten the much larger (in comparison) but still very small "peanuts".  They taste a lot like raw, fresh bean seeds.  Quite difficult to find as there are few to begin with, and finding where the vine actually roots into the ground is a challenge!

Here it is twining up a Rubus sp.  Sometimes it can look like a tiny kudzu vine that envelops all. It is a perennial, but the threadlike vines die back to the ground each winter and pose not threat. Also in the more wooded area is Prickly ash (Zanthoxylum americanum).  It is a stoloning shrub/little tree, and in sunny parts it can produce impenetrable thickets due to the thorns. Wherever there is Poison ivy, it's a good idea to keep a watch out for the antedote, just in case: Impatiens capensisAn unlikely place for it to grow, atop a 10ft. granite slag pile, but it makes for a nice photo opportunity. Also in the park is a restored tall grass prairie.  Not exactly a gem of an example as most of it looks like a grain field of Big Bluestem (Andropogon gerardii), but there were a some exceptions. Most goldenrod species are difficult to differentiate, but Rigid goldenrod (Solidago rigida) is quite easy for obvious reasons.  Also seen here is a couple flowers of Ratibida pinnata up the center, Schizachyrium scoparius (still not in bloom) right behind the Rigid goldenrod, a few Purple prairie clover seed heads at the right front and dry Side-oats Grama (Bouteloua curtipendula) seed spikes in the foreground and especially in the right front corner. It's great to see that a grassland can be restored that well!  It's amazing that some grasses are still not yet in bloom.  I'm enjoying seeing your native plants, Rick.

Almost all roadside seeding along country state roads and outstate (non-metropolitan) freeways is now with native seed mixes, at least in part if not completely.  County road seed mixes vary.  Restoration success varies, but it's always better than huge swaths of non-native brome grass and such.

There are a number of Polygala species that have flowers resembling clover heads... it's an interesting genus containing some drastically different plants, many are inconspicuous weeds, some wonderful alpine or rock garden gems, and intricate shrublets.  I haven't seen this one before, attractive heads, but look at those thorny stems!

I know there are both trees and annuals in this genus but the flower are always recognizeable when you see it! However the flowers were hidden in those heads something I have never seen before.