The first of the Pulsatilla vulgaris are blooming... funny how the younger plants seem to start blooming earlier than the older plants:

Pulsatilla patens blooming in the front yard... I'm not certain if this is a plant I bought long ago that is finally blooming, or if it is one of the seedlings from 2 years ago:

They are blooming in the wild now too - I'll follow up with some pictures!

I lost my only plant of P. patens, but I did manage to get some seedlings from it. So, why is it listed as Anemone patens in The Plant list? I can see no differences to it from other Pulsatilla.

The Plant List also considers Pulsatilla occidentalis to be a synonym of Anemone occidentalis.  I gather there must be some reason to deny North America it's pulsatilla species, though I have no idea what it is.  ???

They are beautiful whatever the name be!

So, it's clearly not 'Alba', but does this look like Pulsatilla halleri ssp. slavica? 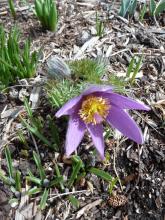 I wouldn't know! But it is lovely anyway.

Remember this posting of mine a couple years ago?  (I basically asked the same thing.)http://nargs.org/smf/index.php?topic=56.msg1282#msg1282

I also looked quite a few postings of halleri on the SRGC.  None of them even had as much leaves during flowering as yours, Lori (and way less than mine).

Love them all! I was very disappointed to see rodent damage (two holes coming out of the soil,, near/right where the Pulsas were) in the bed with my P vulgaris plants which had been getting nice and big- I think both large plants are gone, and all I see is one small plant, probably one of the self sown seedlings..Weirdly, the bulbs- some retic Iris, Scilla, not sure if Muscari is up seem to be okay, and are actually doing better than last year, when I thought they were dying out in the bed (presumably since I realised the bed was in the path of meltwater-I made it wider so the water can flower outside of the planted area)..Of course, it could be something else that killed the Pulsas, but seems a bit coincidental...

Lori/others do you do anything particular with the soil for most Pulsa sp?

Ah, right, I forgot about that, Rick.  My plant has a little different appearance than my many P. vulgaris... wonder what it is.

Cohan, pulsatillas are very tolerant of the conditions here and don't seem to require any special soil... well, actually, nothing in my yard gets special soil, other than alpines that I think will actually need it... and a few of the things in the acid beds.

That's why I was wondering about the Pulsatillas- some of them are alpines  ;DMy property does have at least two completely different dynamics, though- the drier greyer soil end, and the moister blacker end, and I'm doing plantings at both ends (plus areas on sunny sides of spruce trees in the drier part of the yard, which are drier still).. so I have to choose which spots are better for various plants-- some I really have no idea, so if its seedlings, I plant them in several places!

In my opinion, Pulsatilla spp. seem pretty adaptable.  Although,  longevity can be impacted depending on the soil type.

An interesting observation the other day:  I was transplanting Pulsatilla turczaninoviii - one year old seedlings.  There were about three dozen still crammed into a 3 inch pot.  (The poor things!)

About 80% had the alpine root system, and 20% exhibited the herbaceous root system.

If Pulsatilla spp. in general exhibit this duo root systems propensity (I don't know), then it would certainly bode well for its adaptability to different soils as a seeding population.

And another related  pulsatilla root observation when grown in pots:  Roots fill the entire pot in proliferation (like a euonymus would) no matter which root system they possess.  But, they don't excessively go round and round at the  pot bottom or sides when they become root bound. It's almost like they stop growing when they fill the pot.

I use Pulsatilla spp. as indicator plants for my potted materials.  They are the first to show water stress.  When they begin to wilt, it is definitely time to water!