I hope this topic is in the right section?
I am located in S. Ontario, Canada zone 5. We have irregular snow cover and winters tend to be wet. So far I have not been able to keep 'hardy' Delosperma.

Last winter I tried 2 in pots, and in fall sunk the pots in the ground to keep them warmer. We had excellent snow cover (unusual), but we also reached the limit of zone 5 (-29C) for 1 or 2 days (also unusual). One looked like it was eaten by rodents, and the other was barely alive.

This year I am trying some in various locations:

- in pots in a shed next to a window--will be cold but a bit warmer than outside, but dry

- in an unheated sun room--cold at night, but a bit warmer during sunny days, more light than the shed

- in the basement fruit cellar--5C, dry, but completely dark

- in a new raised rock garden, grown mostly horizontal wedged between rocks, covered with clear plastic to keep rain out. Cold, but the crown of the plant should stay dryer.

Any other suggestions would be very much appreciated.

None of the species comes from a habitat where it gets below, say, -17C. (According to the all-knowing Wikipedia, the coldest temperature recorded in South Africa was -20.1C, at Buffelsfontein.) I doubt that the plants experience constant cold in the winter, though possibly sub-freezing temperatures fairly often during the winter. (I don't consider a temperature of, say, -10C to be cold.) Every so often we get a winter here in Denver where the delospermas are pretty much wiped out. Sometimes they recover.

I suspect that none of the species undergoes a complete winter dormancy; if this is true, then keeping the crown of the plant would not be the answer. Keeping the roots dry would. Dry soil blocks the root hydraulic conductivity and prevents the plant from absorbing water which will then freeze and kill the plant. (Unlike, say, hardy cacti, which will not absorb water once they have become dormant.)

I don't know anything about wet winters, so you would have to figure out how to keep the roots dry during the winter. Do get rid of any organic matter around the roots. That's probably not much help.

I don't know if I really have any suggestions, but I do have some experience in zone 4.  I increasingly have winter wet problems with our changing climate.  I use to depend on being able to produce a solid freeze that extends through the winter until spring, but it is becoming more and more difficult.

One year, I thought perhaps if I could keep my troughs very dry during winter in an unheated shed (12ft x 12ft) that has no windows, that would do the trick.  Besides getting too dry for regular alpine materials, what happen was that it got too warm inside the shed sometime during late winter, the Delosperma came out of whatever dormancy they were in, and then froze to death when it got colder in the shed again.  That season, the other delosperma of the same species (nubigenum and basuticum) did better over winter in the normal way I overwinter potted materials.  I put everything in two 5 x 4 x3ft boxes line with hardware cloth to keep rodents out.  Then cover with one layer of blanket and a waterproof covering for the winter.  The picture shows everything loaded up with a loose covering tarp until the weather and soil gets cold enough for permanent winter cover. 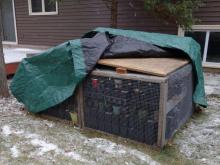 But I always have some dieback every year with my delosperma, seemingly no matter what I do.

(Thanks for the opportunity for me to rant a bit on this subject....)

No "hardy" South African mesembryanthemum experiences cold lower than about -18C on a regular basis in its native habitat. It would be more reasonable to list them all as hardy to Zone 7, at best. though I doubt you could get that changed.  I suppose there could be a claim made for some genetic inheritance of cold hardiness, but if that were so, then claims of hardiness based on habitat wouldn't have any value.

This doesn't have anything to do with "drainage"; according to Steven Hammer the habitat soil of mesembs is very dense, with very little organic matter.

Here are some pictures of "aloinanthus" taken from a nameless garden. The gardener is notorious for exhibiting a high degree of slothfulness. The plants were not "degunkified" (my term, which I should have trademarked, for removing all of the organic nursery gunk from the roots prior to planting), but instead just planted in a fit of planting frenzy. They have peat around the roots. That's fine in a greenhouse, but not so good in the garden.

The first picture shows two healthy ones, after the sudden drop to -23C here a while back, and at extreme left, a very dead one, which is also shown in the second picture. The only rational explanation is that the dead one had a water source at its roots (wet peat), and was still pulling water into the leaves when the cold hit, water in the leaf cells froze, and the plant went kablooie (horticultural term). 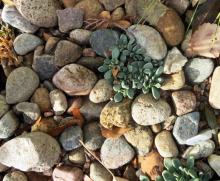 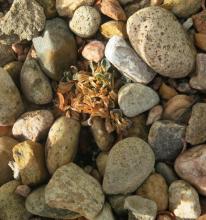 I confess that this stuff makes me slightly crazy. First picture was taken a few minutes ago, looking into the sun, at 10:35 a.m. Temperature -3C but quite pleasant because of the warmth of the sun. It has not rained here in two months. The path under the snow is dirt. There are no woodland plants from eastern North America in this garden, no Phlox subulata (they fry in winter), no heaths or heathers, no hollies, no magnolias, no Dryas octopetala (rated to Zone 1 but dead here at +3C in January, on multiple occasions).

There is a largish collection of "traditional" alpine plants; e.g. ca 75 porophyllum saxifrages, grown in total winter shade and with summer irrigation. Grown in troughs which stay frozen solid all winter. Winter sun is fatal here.

Second picture, taken a couple of minutes earlier, Delosperma 'Lesotho Pink'. The average cold temperature in Lesotho is -18C, and the coldest temperature ever recorded is -20.4C, so that would be Zone 7, since zones aren't determined by record cold, by average lows. There is no place in South Africa that could be considered Zone 5.

So when you read claims that delospermas are hardy to Zone 5, what those claims mean is in a Zone 5 like this one. (I could be in Zone 6, but it hardly matters.) Dry winters mean dry soil, which blocks the root hydraulic conductivity (taking this phrase from studies by Park Nobel) in plants which do not experience a true winter dormancy. That's why we can overwinter all those zone 8 plants people are crazy about around here: agastaches, Salvia greggii, a few agaves. 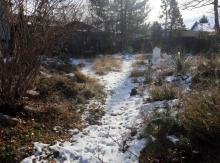 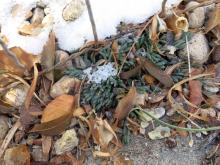 One more thing and then I promise to keep quiet. Here's a very short video of what I consider to be perfect soil. Taken at the end of January, last year.

(It's the only video on my channel.)

Script must have taken some writing Bob!

It didn't do very well at the box office, so maybe it's time to release the Director's Cut .....

I forget why I made the movie. Maybe to illustrate the idea of dry soil, or something.

Gardeners in the U.K. have known for over a century that dry soil increases the hardiness of certain species. There's some low temperature point, which varies with the species in plants that are "semi-dormant", beyond which roots have to stop taking up water without fatal results.

I don't think gardeners in the U.K. would be overly concerned about this, but a large number of hardy plants can be frozen solid for months on end. In winter, of course. Photosynthesis stops, and the plants just sit there.

Here are the results of my tests - a bit late :)

Plants in shade died. Plants in the unheated sun room hung on most of the winter but did not make it.

In the new raised bed, the one plant that was covered died, but a second smaller cutting that was not covered survived - barely. It grew this year, but did not flower.

What worked best were plants in the fruit cellar. We had a very cold winter and it did get just below freezing - no harm to plants. they spent 3-4 months in the cellar with no light, and they stayed green. I hardly watered them and they did shrivel a bit, but not too much. In summer several of them flowered very well.

This winter they are all spending it in the fruit cellar. I'll try to divide some and try them in the unheated garage next year.

for now - I don't think they will survive outside in my zone 5. Since some were covered (stayed dry) I don't think just dry conditions will change this.

My friend has a yellow variety - no name - and it did survive several years a few miles from me. so some varieties may make it in zone 5.