I've not made hypertufa for this purpose, but I have played with leftover chunks from my trough making.  When the mix is dry, but still relatively soft, I've done some sculpting with a drill and cement bit.  Adapting this to texturing might produce some interesting surfaces, if it would fit your overall scheme.  This mix was with sifted peat, portland cement,vermiculite.  Using dyes mixed thoroughly or partially would add to the natural look. 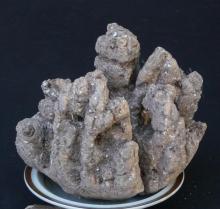 That's interesting! Have you used that piece in the garden and planted in it?

It was an experiment as a small scale replica of something I'll try in the future at a 1.5-2ft size.

Please feel free to copy it, and report back!

We have been searching for tufa to no avail and have had simiiar ideas of casting hypertufa in this way. The best technique I think is to use a range of large stones as formers to mould damp sand in a box, or simply in the ground, and fill in with the hypertufa mix. This has worked well in a small trough we have but so far we haven't tried it on a larger scale. The hypertufa can be drilled easiiy, just as tufa is, and is equally amenable to plants.

That may be interesting to put in a trough!

I agree, sand sounds like it will make a good mold. Thank you!

I may have been part of the earlier thread you mentioned but don't remember....perhaps I just intended to post and never did. Never mind. I'll soon be retiring from the rock garden world and thought I'd share the results of some experiments I made with making hypertufa rocks and shallow troughs to hold them.

First, I used no peat moss in the mix, using only fine vermiculite and perlite as fillers. This causes the ht to set up faster than the normal mix, and the object can be carefully handled in about 12 hours. It is still at a 'green' stage and can be carved with clay modeling tools. I chose to cast my objects in the rough shape I wanted and then carve them into the exact shape while they were in the green stage.

The rocks were cast to be hollow with approx. 2" thick walls. If you were using your rocks-in-sand method, you could pour 2" of ht mix in the bottom of the sand mold and then place a spacer of some sort, perhaps a block of wood wrapped in plastic sheet, in the center to leave at least 2" around the sides, and pour in the rest of the mix. Later, while in the green stage, the excess ht could be carved out so the walls were more or less uniformly thick.

I tried to mimic several different kinds of rock. For tufa, I first intensively worked the surface with a scooping tool. Then using 1/16 and 1/8 inch bits I drilled a lot of holes through the walls. The bits go through the ht easily. Then, with a larger bit, I drill holes for planting into. These vary in size depending on whether I'm going to plant seedlings or sow seeds into them. Then comes the hard part. With a Dremel tool and a bit with a very small round head, I go over every inch of the surface of the rock and texture it as much like real tufa as I can. This is not so much difficult as it is time consuming.

Finished objects are put aside to cure for a week and then submerged in acidic water for a while, and then they're ready for use. My rocks are paired with very shallow (1"-2") troughs. The rock is inverted and packed with growing medium of your choice so that it's mounded, then the upside-down trough is place on top, and then the whole thing is flipped right-side-up and the sides of the trough filled in.

We grow in tufa to keep the plant crowns dry and because it looks cool, not because it's the natural habitat of so many of our favorite plants. The problems with it are the difficulty of getting seedlings to root in it and keeping it moist enough, not to mention expense and rarity. By making the rocks hollow and filling them with a gritty but somewhat moisture-retentive medium, the first two problems are obviated. By making them yourself, you eliminate the latter two.

Here are some pics of troughs that have survived on shelves above ground for 4 MA winters.

Jeremy Uxbridge, MA US Zone 6a Consider that you might be wrong.

Thanks for that, Jeremy.  There is a lot or room for innovation, creativity and experimentation, and your ideas and experience adds a lot to the repertoire.

Are all the small drill holes are for soil aeration?  Did you ever try it without them?

The holes in the 'tufa' rocks are to recreate the properties of real tufa, both visually and in that the rock holes catch and channel water into the interior when watering. And, as you point out, they allow air to reach the soil. In the case of the plant on the right in the middle photo I first sent (forget the name, lost the records, it might start with an Asp?, mossy/grassy) the plant has quadrupled in size and rooted down into the rock through the holes.

The rock on the left in the first photos and the pic I'm attaching here are examples of rocks that have no small holes drilled into them. They have either larger openings (about 3/4") for seedlings to be planted into (which the dwarf Primulas seem to enjoy) or a few ~1/2" holes or even slits (to simulate cracks) to sow seeds into. The rock walls are otherwise solid. I have found it useful to make an unobtrusive opening or two on the top to help in watering.

The shallow troughs that hold the rocks don't have drainage holes and are +- waterproof. Excess water from watering is held in the troughs and is gradually wicked-up into the growing medium inside the rocks. This encourages roots to go deep and greatly reduces the frequency and difficulty of watering real tufa.

Jeremy Uxbridge, MA US Zone 6a Consider that you might be wrong.