at Mark McDonough's request, I'm posting some pictures of my propagation box and grow room, used mainly in the production of rhododendron and azalea cuttings and seeds. 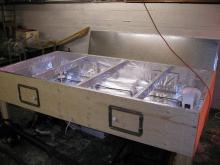 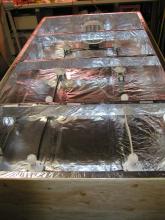 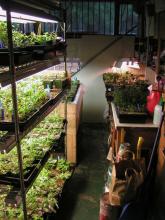 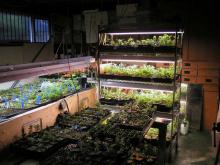 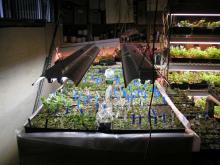 Very impressive!  Looks like the lights over the big propagation box are raised and lowered on chains?

Very nice set up, Chris.I am a bit confused with the prop box.  Are those incandescent bulbs the only source of light?  I would think they produce a lot of heat.  Is there a reflective top?  What are the "chicken coup doors" for?

"I would think they produce a lot of heat" >>>> that's the whole idea.

I know two people (one now deceased) who had fires in their greenhouses as a result of malfunctioning heating cables.

One guy completely lost his greenhouse, the other was luckier: the heat generated by the fire melted the solder of his overhead watering line, rupturing it which in turn extinguished the fire.

For an indoor setup I needed something safer than conventional heating cables so I figured incandescent bulbs would do the trick.

Picture #1 shows the galvanized sheet metal top leaning against the back wall.

Temperature control: initially, I ran into a problem. I purchased a Johnson Controls A419 NEMA 4X, http://cgproducts.johnsoncontrols.com/MET_PDF/125188.PDF

Yet for some reason the relay contacts would occasionally get stuck in the closed position and not de-energize the system resulting in the system overheating several times. They replaced the unit free of charge, but even the replacement unit did the same thing.

To lower the load on the temperature control relay, I connected the bulbs to an Omron MK2EP-UA-AC120 double pole, double throw relay, http://www.plccenter.com/buy/OMRON/MK2EP-UA-AC120. (Apparently, this relay is now obsolete, not surprising, I bought it about 25 years ago.)

To further reduce the possibility of the system overheating, I installed a second A419 NEMA 4X.

The fan runs 24/7 and minimizes the effects of radiant heat, which creates 8 distinct hot spots directly above the bulbs.

The 4 "chicken coup doors" give me easy access to the inside of the unit to replace any burnt-out light bulbs.

Chris, your method is explained very logically.  Understood, and clever with the second relay I might add.  I did notice the sheet metal standing up behind.  I am still very surprised that those light bulbs provide enough light.  Don't Rhododendron spp. cutting take relatively longer to root than other woodies?

This is my fluorescent light growing setup:

I started with a 4' x 4' piece of plywood, and attached 1x2 sides to it.  I brushed two coats of polyurethane on it to make it somewhat waterproof.  I use white styrofoam insulation to reflect light back towards the plants.  The fixtures can be hung from a basement or garage ceiling, or they can be hung from a frame attached to the 4x4 base.  If you place the 4x4 base on a card table or folding office table, the height will be just right for comfort.  The lights are about 6 inches above the plants.

I keep the setup in a heated area of the house.  All waste heat from the fixtures goes into heating the house, so it's 100% efficient use of power.  And it's very convenient to get to.

For delicate seedlings  and new transplants, I recommend covering the flats, like this:

I get nearly 100% survival of transplants using this method.  And it reduces frequency of watering.  Also, it's the only way to keep tiny seedlings like Ramonda alive.  You can also use clear plastic bags that can be closed.  The pink bloom on the left is Mimulus lewisi.

I start slow-growing plants in December, and keep them growing all winter long.  They will sometimes bloom under the lights, and will often bloom the first year in the garden.  In the top photo, the lavender flower is Epilobium rigidum, blooming in about four months from seed.  I hand-pollinated it, and it set good seed under the lights.

Excellent setups, Chris and Gene.  Those nice wide tables are the bee's knees!

(Let's see... I could always tear out the furnace to make room for some good-sized tables, and then just heat the house with cans of Sterno... and then I could really start some stuff!  ;D ;D)

Gene, I use very similar clear plastic tray covers - they're very handy.  For my (much more modest) set-up, I use a pair of 4' double fluorescents over each shelf, also suspended on chains.  I keep them as close to the trays as possible, and raise them as the plants grow.

For those of you using the cheap fluorescent shop lights, I discovered that a lot of them (at least in the old days) didn't come with a real ballast.  They had little bits of electronics and transformers and stuff sprinkled around which acted sort of like a ballast.  At $12 a fixture, you can't expect much.  The problem is that these fixtures are noisy, don't start well in cold temperatures, eat up lamps, flicker...you get the picture.  They are junk.  About half of mine stopped working over the years.  I just bought a bunch of replacement ballasts at Home Depot and figured out how to install them.  They make all the difference in the world.  The lamps come on instantly without flickering, and there is no noise.

There are a lot of different ballasts.  You will have to write down the type of lamps in your fixture, and bring it to the store.  If you are intimidated by wiring diagrams, don't try to do this.  It's a little tricky and quite time-consuming.  Taking the fixtures apart is a problem.  You could just buy the new energy-efficient fixtures.  I didn't want to do that because they don't fit well into my existing fluorescent light garden setup.

The whole thing sits on a 30 inch x 5 foot long office table from Office Depot, with some plastic film and bubble wrap on it to protect the table from scratches and moisture.  This places the plants at just the right height.

I keep my house cool during the Winter, around 60F.  At around 70F, the seedlings grow long and weak, and have disease problems.  For some seedlings, like European alpine Gentians, 60F is too high.

The fixtures are ancient 48 inch shop lights with two lamps per fixture.  Each of them has a new ballast in it, secured by the two bolts that you can see on top.  I use cool white lamps, with a couple of daylight lamps mixed in. 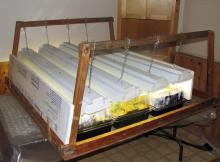 I hear you about low grade ballasts.  What I really look for in a plant light fixture is a good, mirrored, reflecting cover.  If the ballast goes, I'll put in a new one and then it lasts "forever".

I am anxious to test out your tip about reflective sides, like you have with the rigid foam board.  Thanks.