The area where I live was completely glaciated. This has caused natural rock outcrops to be covered by glacial till. Very little habitat remains that supports plants which would be suitable for a rock garden. The habitat that remains is either alvar (SW of my area), end moraine, or rock canyons that occur South of my area. I am posting a link that contains lots of photos. This website was created by the people who volunteer to maintain this Nature Preserve. The photos on this website should given you an idea of the plants that can grow on rocks (technically gravel) in my area. If you visit this area please do not disturb it. Everything is protected by law. Most of these plant can easily be purchased from a number of nurseries if you are interested in cultivation.

What a wonderful site.  Thanks for sharing the photos.  You're lucky to live nearby.

There are many beautiful places to visit near where you live.  The blog that can be accessed from the following link has many great pictures.

Nice area, James.  I had a chance to go through the photos.  It's not surprising that most are familiar species in Minnesota.  I was able to identify a couple plants I had wondered about in the past.  The fauna photos are interesting, too.

Besides the more Northernly latitudes, ocean moderated temperatures, and larger amounts of precipitation, there is another reason natural areas where I live have developed differently than those found in Norway.  Natural areas in my region were historically burned on a regular basis.  This prevented tree species typically found farther east from invading.  Regular disturbance by fire maintained open conditions which allowed the prairie vegetation to persist.  Fire prevention has caused significant problems for these fire adapted ecosystems.  Returning fire has been necessary to maintain these communities.    Interestingly enough, there are also woodlands in my region that are adapted to and require fire.  This ranges from closed oak woodlands to more open oak savannah habitats.

Thanks, James. Interesting! I've read that wildfire seems to have been "common" in some dry pine and spruce forests in eastern Norway too - but with a frequency of 100-200 years intervals.

Fire in Pine and Spruce forest is a rather different matter.  It is like resetting the clock.  The prairies, savannahs, and oak woodland are different.  Instead of have a cycle of infrequent burn with long periods of regrowth, these ecosystems burned on a regular basis.  When I say regular, I mean every year or two.  I originally did not believe the frequency needed to be (or historically was) this high.  That was until a forester South of my area saw burn scars on old oak trees that were being removed by a land owner.  The land owner gave him "cookies", which is what they seem to call cross sections, of these old trees.  With diligence and a lot of these "cookies" they figured out that these oak woodlands had been burned almost every year that conditions made burning possible.  This had occurred for as long as these old oaks had lived, which was over two centuries.

Without fire, the ecosystems in my area quickly begins to be over come by faster growing species.  The species that invade can grow faster because they do not put energy into thick bark or resprouting each year.  It has been a hard sell for conservationists to convince the public to use it's valued money to set their prized nature areas on fire.  I must admit I was skepticle at first.  That was until I started to see the result after a couple years of prescribed burning.

Oddly enough, prairies start to lose forbs and become dominated by grasses with frequent fire.  Historically, this was not a concern because of grazing.  Grazing maintains diversity even when prairies are burned annually.  The problem with grazing is the public and even many conservationists do not support this management activity in urban/suburban preserves.  Grazing was the historical use of the land and has been shown to be ecologically necessary.  If you want to learn more about the ecology of prairies I suggest the following blog.  The pictures are excellent.

These frequent fires were actually set by historical inhabitants because wildlife prefered to graze on the tasty new growth.  This tradition was continued by ranchers and locals until a new urban/suburban population deemed fire to be bad.  This "fire is bad" attitude has made work difficult for those who want to conserve these ecosystem that require it.

I suggest seeing a prairie burn if you ever have the opportunity.  When 8-10 ft. grass goes up in flames it is a sight to behold.  It is so powerful it creates its own weather.  Look at the attached photos to get an idea.  These photos are of a burn in an old hayfield that is being restored.  The native tall grasses are even more impressive when they burn because of their additional height. 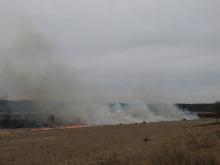 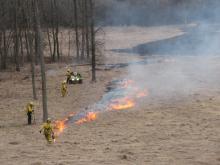 A very clear, informative and accurate explanation, James.  With the Pagami Creek fire that still rages out of control in northeast Minnesota (now consuming more than 100,000 acres), people are calling for a re evaluation of U.S. Wilderness Area rules regarding the use of fire in ecology.  It's a good thing.http://minnesota.publicradio.org/display/web/2011/09/29/boundary-waters-...

Fire can make for some good photo opportunities, too:http://nargs.org/smf/index.php?topic=67.msg1223#msg1223

I always find it ironic when those given the responsibility to over see natural areas in the Midwest have a "let nature take its course" philosophy.  The fact is, humans arrived not long after the great sheets of ice melted.  There is nothing any human in the wilderness loves more than a good fire.  At least this is true once they've had a good meal.  Unfortunately, lots of people are not responsible with fire.  This has created an ecosystem that developed with a fire frequency that is much higher than could be expected from lightning strikes.  Preventing fire causes the ecosystem to change to a less diverse state full of less conservative species.

A good example of fire adapted species that are more common North of my location are aspen.  They require periodic fire.  Aspen resprouts after fire.  Without fire aspen trees decay, die, and then are replaced by conifers.  Wildlife needs these fires too.  Ruffed Grouse prefers aspen with a range of age classes.  Once the aspen get over 60 years old they no longer provide excellent habitat.  If no prescribed burn program is being conducted then the aspen and the dependent wildlife will suffer.

It is a shame communities lose buildings to wild fire.  I wish municipalities would require buildings to have protections that reduces the possibility they could get damaged by fire.  I hate seeing poorly designed houses made of petroleum products and wood that are built too close to one another.  Especially, when these houses are in areas where intense fires naturally occur on a regular basis.  It seems to me certain communities have been designed to cause a disaster.

Very interesting, James. Man seems to have forgotten that he always has been a part of nature and think that only the modern man has power to put his mark on it.

We have a similar problem in Norway (and western Europe) regarding the heathland. The heath  was burned by man and grazed by his livestock for at least 5000 years. This practice ended (in Norway) about 30-50 years ago and the heathland disappears as the woods advance. Now it is very problematic to put fire to the ling and a lot of people doesn't understand why it is necessary, but they want the heathland to be as it always has been.