Hacquetia epipactis is an unusual little umbellifer that adds the charm of its odd, green ruffed flowers to the spring season. It begins emerging in mid-April in my garden, in this area of cold and long winters... though much, much earlier in mild winter areas! The foliage is very decorative throughout the season, and reaches a height of about 6" after the bloom season... in my garden, it may have to put on growth to reach above the dense bulb foliage around it. The attached photos show a bit of its development through the early season. It's native to lowland and upland woodlands in Europe, according to various sources. It's obviously extremely hardy, and has been long-lived, though it has been very slow to spread for me. The soil here is generally alkaline clay, though our garden beds have been improved through time with the addition of organic matter. It withstands our generally dry conditions also, with little or no supplemental watering. I've read that it rarely seeds around - perhaps others can comment on whether that has been their experience or not? I've been growing it since purchasing a plant in 2004, and since then, have only found a couple of seedlings from it.

Lori - this is one of my out and out favourite umbellifers! With us it is often flowering in February and can cope with very dry conditions in summer; it just dies down early. It seeds gently for us, always in shade, but I think if conditions dry out too much the seed will lose its viability - I normally collect seed fresh and sow it in summer. There is also a fine variegated form called 'Thor', which presumably arose in a Scandinavian garden but is very slow to increase by division. Good plant, there is really nothing else anything like it.

So it goes dormant in summer there, Tim?

This Hacquetia is one of my favorite woodland plants, too.  It does tolerate a lot of dry, as mine grows in the shade among Sugar maple roots.  It does not die back in the summer.  I use to have another that grew where it was equally dry but with a couple hours of strong midday sun.  It did die back in the summer, and seemed to be slowly dwindling, so I dug it up and donated it to our Chapter plant sale.  I also purchased mine as plants in 2004. Seed production is pretty good, even with only one plant, but I have only had two or three volunteer seedlings.  Initially, I thought I had more, but when they are very small, they look a lot like Astrantia major (Masterwort) seedlings, which many turned out to be.

Mine begins blooms in early April in zone 4.  All flowers emerge at about the same time, but are effective for well over a month.  In time, the chartreuse "petals" will turn a deeper green, and can "hide" among the later emerging foliage, even though they are not covered.  In fact, the "flower" remains right through seed production. 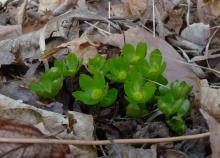 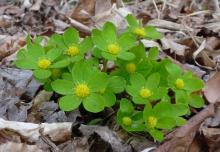 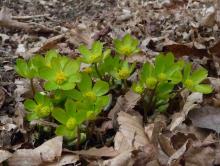 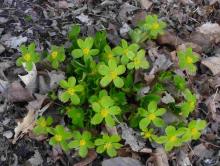 I have the same experience as Rick. Where growing with moderate moisture they stay in growth right through the year. We have some plants though in much drier places, one in particular at the base of a cherry, and this always dies down early, but so far has always appeared again in the early spring. The roots go very deep and probably why they resent being lifted and divided. Lovely photos - really shows the unique value of this plant.

This is an interesting plant! I have only one clone and think it is therefore I don't get many seedlings. My plant grows under a dead birch (I killed it 2 years ago) but it is still rather dry there. It starts in March and usually goes dormant during the summer. 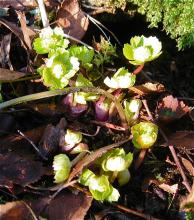 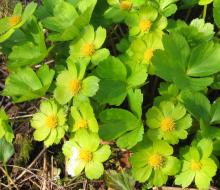 Hacquetia grows remarkably well for me in a deep raised bed, more or less in full sun. I should probably move it to somewhere shadier as it browns off and looks shabby at this time of year (midsummer down here) but am too scared of killing it. Seeds seem to prefer to self-sow round the parent rather than be cossetted in a pot.Tim mentions the beautiful variegated 'Thor'. This has been on my wishlist for many years so I was delighted to get some seed of it from the latest UK AGS seed distribution. However I'm not holding my breath as I doubt it will come true from seed. Dreams are free!