Not exactly a rock-garden-sized Aster (yes, I still call them Aster) is Aster pilosus (Symphyotrichum pilosum), native to eastern North American and disjunctly in British Columbia. Typically growing to 3' or more, the species is highly variable and I have plants that reach 6' tall, and as well, have observed plants growing only 18" tall and could be admissible to a larger rock garden.Map: http://plants.usda.gov/java/profile?symbol=SYPIP3

It is known by several common names; Frost Aster, White Heath Aster, Hairy Aster, but I like to call it Deven's Aster ;D based on a remarkably variable population found growing at Devens, Massachusetts, the destination of the NARGS Eastern Study Weekend 2010. This area is a partially decommissioned military base formerly known as Fort Devens in Ayer, Massachusetts, but became its own town, Devens, Massachusetts, a growing business community.

This Aster species has many exceptional attributes including: extended season of bloom (Sept - Dec), graceful yet showy blooms, ease of cultivation, deliciously scented blooms (rare for Aster) like vanilla butter cookies, the floral display immune to adverse weather such as rain, snow, or freezing... the flowers just keep on going. One of the very last plants in bloom in the late autumn garden.

This photo essay explores the great variability of Aster pilosus found growing at Devens; the range of plant form, height, flower size, floriferousness, and even flower color (some light pink forms here), is remarkable. The first two photos show a lower growing type with high flower count that I hope to test under garden conditions; cuttings have been rooted. All photos taken on November 03, 2010, very late indeed, considering some are just starting to open flowers! 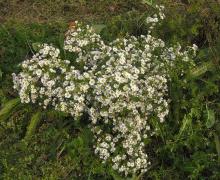 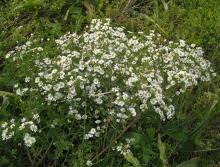 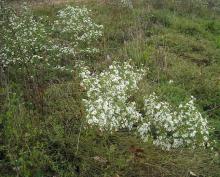 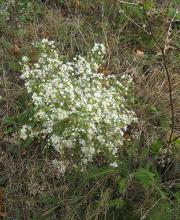 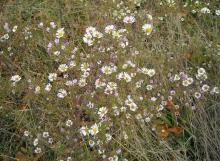 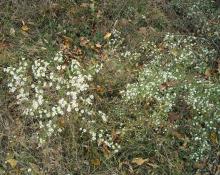 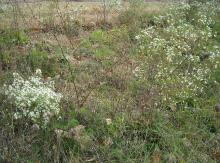 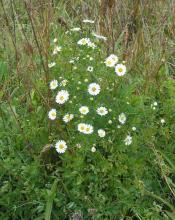 The next series of photos show Aster pilosus growing in my garden.  The forms I have can grow very tall, to 5-6' (up to 2 meters), flowering for several months on long narrow pyramidal spires.  Some forms tend to arch and splay over, making large bushes of apparent height of 3' to 3.5'.  I planted some close to the stairs leading up to my deck so that I could enjoy the enticing perfume of the flowers on warm sunny days, the scent exactly like vanilla butter cookies, I'm not making this up!  The flowers go on and on, looking fresh from September up until December!  This plant is a butterfly magnet. 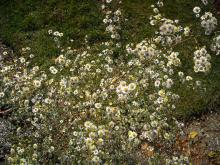 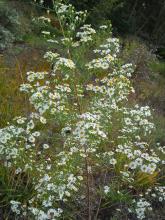 The autumn asters really are one of America's glories: it's interesting that there seems to be a different white aster in every state: ours is A. porteri (I know, I know they're all different genera now...I'm stickin' to my guns and asters--a good name for a rock band, no?). Our local form is charming on the highway, but a pest in the garden--spreading with voracious rhizomes. It is incredibly drought tolerant.

For the rock garden it will be very hard to beat 'Snow Flurries' which has become essential in my eyes!

Okay, I know I'll win the "Worst Quality Photo ever Posted" award (it looks like its out of Gurney's catalog) but this is Snow Flurries for those unfamiliar.  Only 6 inches high, it is growing in a raised bed.  The upright sedum is outside the bed and planted 16 inches below.

Truly fantastic, drought tolerant and very easy as a regular garden plant, too.

Hello, Mark, shouldn't you call your Aster a tree-aster? I have always heard that everything is big in America! I have 2-3 asters in my garden of unnamed autumn flowering garden hybrids, but none like that.

Hello, Mark, shouldn't you call your Aster a tree-aster? I have always heard that everything is big in America! I have 2-3 asters in my garden of unnamed autumn flowering garden hybrids, but none like that.

A photo of cuttings taken this sping, from plants I tagged with "twist-ties", easy to snap off a few fresh basal shoots and root them, already sending up new growth.  I collected seed too (ready late winter or early spring), but cuttings from selected individuals should give the best results. I never thought about propagating aster with new shoots.  Divisions of Snow Flurries always look sparse the first year.  But I can get "top dollar" at our Chapter plant sale for them.  Must try this...

I never thought about propagating aster with new shoots.  Divisions of Snow Flurries always look sparse the first year.  But I can get "top dollar" at our Chapter plant sale for them.  Must try this...