Carpenteria californica always garners attention from visitors to the garden at this time of year. I've had to prune it quite strongly to allow space to underplant with cyclamen and bulbs, and actually quite like that peeling bark which I hadn't noticed before. I would love to try growing other shrubs such as Arctostaphylos, but these are hardly known in cultivation here. I wonder what other 'woodies' might be recommended? 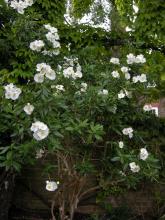 Rhododendron occidentale, the western azalea, is a classic.  If you grow them from seed, they will start blooming at about three years old.  There are several color forms.  The wild pink and yellow combination is the most striking.

Quercus sadleriana and Lithocarpus densiflorus are two low-growing shrubs (2 - 3 ft.) that don't make showy flowers, but produce lots of acorns in late Summer, which are a big favorite of blue jays.  Both are hardy in Washington state.  Edit:  the shrubby form of Lithocarpus that I grow is from the Siskiyous.  Evidently there is another form that will grow into a large tree.  See http://en.wikipedia.org/wiki/Notholithocarpus .

Romneya coulteri will grow in Washington state, but will only thrive in sandy or gravelly soils, where it will spread underground.  In heavy soils, it gradually dies out.

Ribes sanguineum, the flowering currant, comes in red or white forms, and is easy to grow from seed.  Hummingbirds love the flowers of the red form.

The link that I originally posted to Hansen's Nursery doesn't seem to work anymore.

Excellent site for California natives is Laspilitas.com ...has and describes just about everything esp woodie things ..

Thank you Bill, Gene. There is going to be a lot for me to learn there - you quickly realise that you only see the tip of the iceberg. What an amazing flora California has!

Tim, your Carpenteria is magnificent, your post stirs some memories of previous plant lust, where I was interested in exploring californian natives that might possibly be hardy here.  As I recall, I only tried once growing it from seed and didn't get germination, but I do grow two Californian (and beyond) Philadelphus species that have proved perfectly hardy here; Philadelphus lewisii and P. microphyllus.

http://en.wikipedia.org/wiki/Carpenteria"Carpenteria should not be confused with the similarly spelled Carpentaria, a genus of palms native to northern Australia"

Philadelphus lewisii - named variegated form, I believe it named 'Mt. Tahoma', one which I purchased from Collector's nursery about 9-10 years ago, flowering well every year I've had it.  The variegation of random yellow splashes and speckling is so subtle that it can be ignored, but the ultra abundance of large fragrant white flowers make a grand show.  I like the dark bluish-green leathery leaves too.  Here are two poor quality photos taken at dusk (when I get home from work); meant to take a photo last weekend when more blooms were open to the point the flowers mostly concealed the leaves.  Must get it out of my so-called "temporary nursery area" and into the ground.  Photos from late May 2012, a month later there are still lots of flowers. 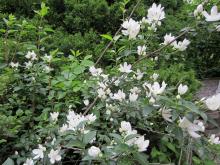 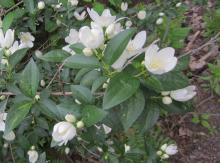 Will need to find older photos of Philadelphus microphyllus, grown from Sally Walker seed from one of the southwestern American States.  It lives up to its name, a smallish twiggy bush with very small leaves and very small 4-petalled white flowers; also been perfectly hardy here in over a decade, now requiring more room than I anticipated, but worth the space as a fine textured curiosity.  Until I find photos, here is a good link (the form I grow has smaller, more narrow silvery leaves than the plants shown in the link; with a large distribution, I assume it is rather variable).

Very interesting to see more information on Carpenteria and Philadelphus Mark. I have grown P. microphyllus, I think also from Sally Walker seed, though nowhere near so fine as the plant pictured, but I don't know lewisii. There is, or was, a really attractive plant close to these 'behind the scenes' at the alpine department of The Botanics in Edinburgh, but I forget how it was labelled. We are probably as well suited as anywhere in the UK to grow some of these plants, even if we a little way from having a Mediterranean climate!

Speaking of Ribes sanguineum (red), I wonder if anyone has a few spare seeds. I don't have a great many seeds to swap this year although Arum maculatum has done very well if anyone is interested.  So many of my plants just shrivelled up before they could set seeds and, of course, the critters and varmints were in their grabbing them too.  I do love those ungrowable (here, almost) California natives.  Thanks, Fran

I'll have a look at my shrubs. Berries are rare, though. 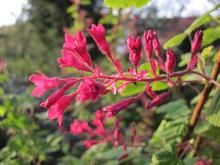 Interesting pics of P microphyllus-- I have a couple Philadelphus here (probably not Californians, so I wont put pics here!) which I have no name for, and seeing the name microphyllus, I thought- wonder if that's it? they have small leaves! Well, nothing like those at all..lol-- fairly large not at all belled flowers, dark stems and no silveriness.. so that's not it...lolCarpinteria is very nice, Tim :)