At one of our local NARGS Chapter plant sales, I came home with a plant identified as Youngia yoshinoi - rare and endangered species, 40 cm, from NARGS 2006-7 seed exchange. It had nice silvery dissected leaves. Overwintering just fine outdoors, it did not flower in the spring, but the stems elongated and eventually in autumn it flowered. It turns out to be a tall Artemisia species, not Youngia at all. Youngia is an obscure Asian genus, its members sometimes separated or lumped under more familiar genera Prenanthes or Lactuca.

I was going to discard the plant, but after two years, I sort of like it now. In late autumn the 3' (1 m) stems produce showers of tiny reddish-brown flowers, they're nearly inconspicuous, but the dissected silver foliage all spring and summer, combined with a subtle floral effect in autumn, and as it turns out, a quick blaze of fall foliage color, make me wonder if I planted it out would it make a bold silvery mound as a focal point.

Not knowing the provenance of this Artemisia, I may never get a reliable ID, but if anyone has thoughts on what species it might be, I'm all ears. 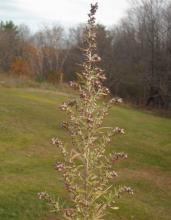 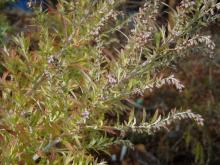