Normally that species does not have bulbils in the inflorescence/seed-head, but occasionally one does find individual plants of Allium senescens varieties that will produce a few sprouting bulbils in the developing seed head, and that tendency will be consistent with that individual plant. If these aren't wanted, because plants that do produce aerial bulbils can be discarded in favor of plants that aren't marred with bulbils.  Curiously enough, I have found that almost any Allium species (those that normally never have bulbils) can on rare occasions produce bulbils; I have recorded this on many species.

Regarding the species name, with taxonomic studies over the last two decades, the European "race" of senescens (including senescens ssp. montanum) is now called Allium lusitanicum (a resurrected early published name), and the Asian "race" of Allium senescens in considered to be the true type.

I hope that helps.

I have attached an image of Allium cernuum with a sprouting bulbil, as an example. 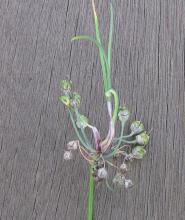