The Plant Messiah: Adventures in Search of the World's Rarest Species 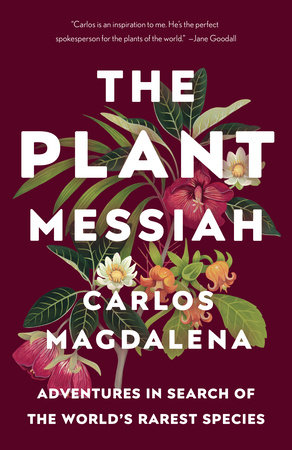 Carlos Magdalena came to formal botanical study later in life, but had a lifelong affinity for horticulture and propagation. Growing up in a large family in northern Spain, the son of a florist who had grown upon the repressive Franco era, a period of ecological devastation. His parents owned a small farm in Asturias, near Gijon and the Atlantic coast, where he learned to graft and bud fruit trees and foster injured animals. After moving to England in his late 20s he managed to secure an internship at Kew Gardens, then a position as propagator and a place in the competitive Horticultural Diploma course.
Dogged determination led him to propagate cuttings from the mutilated sole specimen of Ramosmania rodriguesii, an endemic species on the remote Indian Ocean island of Rodrigues, and decode the morphological barriers to viable seed production in sufficient numbers and with enough genetic diversity to reintroduce into the wild. He also worked to propagate and preserve other extremely endangered endemic plants in coastal Peru, Australia, and Mauritius, among other locales. In more than one instance mismanagement of populations, often numbering in the single digits, nearly doomed them, but they were brought back from the brink of extinction with Magdalena’s skill and dedication. His story and the plants he has dedicated his life to are an inspiration in an often discouraging age. .

Steve Whitesell is a retired landscape architect living and gardening in a small village in Schoharie County in upstate New York. He copes in the garden with floods, lily beetles, jumping worms, a wide variety of rodents and the occasional success.