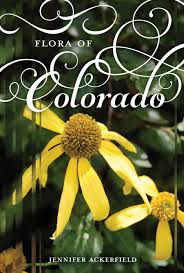 Now and again there is a new generation of authoritative botanists who keep track of a state's flora: In Colorado’s case, 2797 native taxa, 3322 total taxa.  Usually when a book is written and printed, the state boundaries are used as a convenient limiting area for these flora. Jennifer Ackerfield is the latest in a line of historic Colorado Botanists, our keepers of the names, and she's earning her Guardian Queen status with the release of her Flora of Colorado, which follows Dr. Weber's conveniently pocket-sized tomes that I grew up with. Weber’s volumes followed H.D. Harrington's very thorough (so much so as to include nearby plants which might be in CO) 1954 Manual of the Plants of Colorado.  Ackerfield gives a chronology of the herbarium keepers before her, and also documents plants which have been subsequently verified as present in the state of Colorado, if barely, as Harrington predicted.

Ackerfiled’s Flora is a brave undertaking and will be a worthy reference for those in the field, who will curse or praise it in their quest to identify plants on a mountainside. Ackerfield started on the project some time ago and those who regularly work in field botany have long valued copies of her re-written keys for certain genera because they were smoother and more practical in real life usage. It certainly helps that she is a bona-fide specialist in taxonomy.

Prior treatments I've used may ask for two plant parts which are not simultaneously present, like flower buds and dried fruit.  This is not her method and comes as a relief to followers of the important grass family and large American genera like Eriogonum.  The species descriptions are recorded in alphabetical order, a simple convention, but incredibly, many floras are not so arranged.

I was a smug user of Weber's manuals, recording species like Lomatium latiilobum, and Onobrychis viciifolia on the inside cover which I had found in the state, but were not included in his pages. Ackerfield's rich and thorough treatment deprives me of that pleasure! Extremely rare occurrences of Hoffmannseggia,  (Caesalpinia), Prosopis (mesquite) and Nolina (beargrass) are finally acknowledged in print.  She is also rigorous about indexing superseded names, since she sticks with the APG III conventions, while at the same time honoring the real reason we have names for plants: people's need to understand and communicate about them. She therefore makes some exceptions parallel to Jepson’s discussion of California's flora. This is something gardeners will appreciate, who are perhaps the last, if ever, to adopt new plant names.
Henrik Zetterlund of the Gothenburg Botanic Garden once said that plant names are for us humans to communicate about them. This may seem obvious, but it is at the crux of the tension and annoyance those who work with plant names may experience.  One will note that Zauschneria, which is now officially lumped into Epilobium, is almost entirely ignored by nurseries, plantsmen, and gardeners because it is perhaps a burning example of the DNA-honouring but mission-ignoring impetus of names.  I have long felt that in Horticulture the names of plants are heavily used by real people who handle living things daily, and we are the most picky about how well the names work, and grumble loudly when we feel compelled to change the labels we have on our old friends in favor of updated nomenclature.  Sometimes science is just plain right, and we must start to see how the genus Penstemon is indeed included in the Plantaginaceae, and the hemiparasitic paintbrushes, Castilleja, must sit in the rude corner with properly parasitic broomrapes in the Orobanchaceae.
Important examples of new generic names include the Big Sage, recently Seriphidium, but mercifully returned by Ackerfield to the genus Artemisia. Similarly, the genus Sabina goes home to Juniperus and the genus Mahonia, which I grew up with, is returned to Berberis.  Ackerfiled’s stated goal to make the flora of Colorado understandable does not oversimplify the complexity of her task. Her solution was to not be afraid of the use of trinomial nomenclature. Subspecies and varieties are often used after species, beautifully pirouetting in the battleground between the age-old scientific  war between "lumpers" and "splitters."   One may ask "is she a lumper or a splitter?”, to which I'd answer, “she's a house-cleaner”.

Another example of Jennifer Ackerfield's obvious aim to improve her discussion of Colorado flora is the inclusion of plate photographs of approximately one-third of the plants. This is a large step which will surely anticipate the future of published Flora world-wide, putting Colorado's within the vanguard.

Ackerfield also employs drawings of important diagnostic differences, and I was surprised to find she had found a way to circumnavigate traditional diagnostics of genera like examination of the stipes of Eriogonum  and Penstemon. The latter, for example, does not include the word "explanate", which doesn’t even appear in the glossary.  Time will tell if this approach will please users of the keys.

My complaints, as a flora junkie, are few.  Dr. Weber, even in his pocket-sized floras, which were often divided into Eastern and Western Slopes of the state, felt the human element was important enough to his story to insert beautiful trivia and stories, such as a description of the alien Ailanthus being the tree of A Tree Grows in Brooklyn. Author Robert Nold pointed out a lovely story in Weber's flora (Colorado Flora: Eastern Slope) concerning Jamesia americana that  stated "very little escaped the Scottish gardeners of the last century." Sadly, though Ackerfield is incredibly complete and thorough in her descriptions of even the rarest plants, there are no anecdotes or digressions into folklore woven into her treatment.  Another complaint is that descriptions of introduced species do not include the small detail of where, exactly, the alien plant came from.

Botanically sophisticated gardeners and wildflower enthusiasts will appreciate the artistically printed Flora of Colorado, not only because the genus Artemisia is reincarnated from its cruel splitting, and Potentilla fruiticosa is again reunited with her sister cinquefoils. Clematis, whom we know so well clinging delicately to tree branches in forests and gardens, is reclaimed from the slivers of Atragene, Viticella, and Coriflora.  Similarly, Azaleastrum is once again described as Rhododendron. Ackerfield's flora is a success in its ease to handle, use, and read by amateurs and experts alike.  I expect it to be a very long time before this soon-to-be coffee-stained and dog-eared iteration of Colorado's flora is usurped.

Kenton J. Seth is a Grand Junction, Colorado Native, a plant fanatic and nervous youth. He's worked with plants all his life in nurseries and public gardens. He writes a blog, kentonjseth.blogspot.com, and owns Paintbrush Gardens.com, which builds native, unwatered landscapes and rock gardens throughout Colorado. He will be a featured speaker at the NARGS Annual Meting in Steamboat Springs, CO in June 2016.