Here are some definitions of Trough:

A narrow depression: as in the earth or between ocean waves or in the ocean bed.
Gutter: a channel along the eaves or on the roof; collects and carries away rainwater.
Public treasury: a treasury for government funds.

These are not definitions for rock gardeners. But it maybe gives you a clue. A trough used by a rock gardener is a relatively small container either hewn out of soft rock or cast using a mixture of cement and other ingredients. Troughs can be used to provide particular conditions that may difficult to maintain in an in-ground planting. Since troughs are elevated from ground level, they are useful for "showcasing" very small plants that may have less visual impact in an in-ground planting. While it is probably most common for trough gardens to be left outdoors year-round, some gardeners also like to grow tender alpines and small plants, some of which cannot be grown in an outside rock garden or need protection from the elements in order to survive. Using a trough is a way to accomplish this since it can be moved (with care and some effort) and protected from the harsh conditions of the outside environment.

There are a number of different kinds of troughs. In areas where they are available, discarded antique stone kitchen sinks may be used. A very ambitious few may obtain a block of a soft rock and hew it into a trough themselves! There are easier methods to make troughs, however. One is to cast troughs using a hypertufa mix and a form. Another is to use Styrofoam boxes and to process them to simulate the look of a rock container. 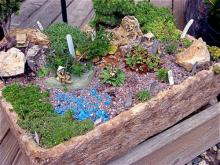 Any type of container forms can be used to make troughs. They range from cardboard boxes (only for small efforts!), plastic containers, dishpans, large mixing bowls, to simple (or meticulously-made) wooden forms.

The hypertufa mix consists of combining one and one-half parts of sifted peat, one and one-half parts of vermiculite and one part of Portland cement and a handful or two of fiberglass mesh for strength. (Note that hypertufa recipes vary greatly, but as long as the proportion of Portland cement to other ingredients, mainly, falls within an important range, the result should stand the test of time.) After a thorough mixing using hands (wear rubber gloves) and shovels, add water and mix again thoroughly.

The amount of water to add is that which will result in a consistency like that of cottage cheese. The mix should then rest for about ten minutes so that the peat absorbs the water. (Note that peat, if used, may also be moistened prior to mixing with the other ingredients.) If the mix seems too dry, add a bit more water. A test for readiness is to grab a handful of the mixture and make a ball. If it clings together, it is a good hypertufa mix for troughs.

The trough forms can now be filled. Two different methods may be used to ensure that the partially-set tufa will release from the forms later on. One is to grease the form; the other is to use plastic film to line or cover the form. Some forms, such a very smooth pans, may not need any type of release mechanism. Once this has been done, let the mud-slinging into the form begin. This is a very simple process - just add handfuls of hypertufa mix to fill the forms to about a thickness of one and one half inches. Very small containers can be thinner but keep them at least an inch in thickness.

At this point, your masterpiece should be covered with plastic film to keep it from drying out. If you don’t see water droplets on the plastic, give it a spray of water. Keep it in this state for 2 or 3 days.

After the 2 or 3-day period the forms can be removed, and if you added dowels for the holes in the bottom, these should be twisted out also. If you didn’t use any dowels, make a few holes in the bottom using a drill with a cement bit. This is also the time to brush the outside with a wire brush to remove any unwanted material and to give it the appearance you like. You can even add some lines to simulate cracks or other deformities. In other words, attempt to give it a stone-like appearance. Just be careful during this time not to crack the trough. When this is done, cover the trough again for at least another week. This slows down the curing and makes it a stronger container.

At this point the plastic can be removed and, if you desire, the whole trough can be sprayed with water now and then or put out in the elements for a month to leach out the lime contained in the cement. At this point it can be planted with your alpine jewels to make a miniature garden. Some people spray the trough with vinegar to reduce the lime effect, but if you are planting those alpines that like a bit of lime, this is not necessary. 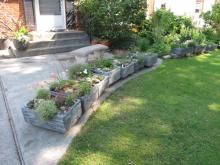 WHY AND HOW TO MAKE “FISH-BOX” TROUGHS

WHAT’S SO GOOD ABOUT A FISH-BOX TROUGH? 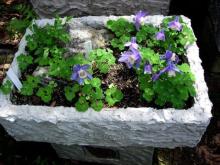 A fish box, or any other strong styrofoam box.
Source: Super Market fish counter. The size of the fish box varies with the type of fish, so variety of troughs is easy to arrange. We found flounder boxes to be attractive.

Note: Just for the experience I made a trough with the Home Depot-equivalent grout and liquid. The amounts needed were different from Lowe’s, but the result was identical. And now the Lowe’s liquid is moss- and mildew-resistant, and seems to work just like the original. 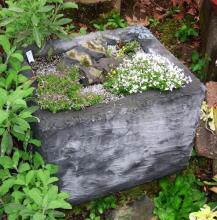 HOW TO DO IT

The soil used in containers should be one that drains well. A soil-less mix fortified with Turface, sand, and granite grit is a good general-purpose mix for many plants. It will be beneficial to use extra portions of Turface, sand or granite grit for alpines that require better drainage, or in areas with high rainfall. Moisture-loving plants may benefit by adding a bit of leaf mold. Happy planting!