All: Great pictures of a favourite genus of mine! Hadn't noticed the spring leaves on cynosbati - will check in spring!

Trond: Ask for some cuttings next time you are up north! These are the species I've planted out in the garden over the last 5 years (mostly seed propagated, but some from cuttings) and some should start fruiting next year:

Nice selection, Stephen- not that I'd expect anything else ;) R aureum seems to be really beautiful, its not in my area....Do you do anything special with the cuttings or just pop them in soil? I have done very little with woody cuttings, and the little hasn't necessarily been successful!

Cohan, all Ribes I have tried root easily and quickly from cuttings. I just stick them in the soil and they don't need any treatment. I don't think the time of the year is important either.

Thanks, Stephen, I'll pay you a visit next time I'm up there!

Stevil!  So you are who Stevil is. ;D  Stephen, I have had your GW exchange page bookmarked for years!  (Unfortunately, I mostly never remember to look at it when the time is right. :rolleyes:)

Here is Ribes odoratum 'Crandall'.  The best part is the strong scent of cloves.  Yummy! 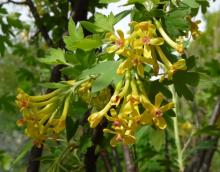 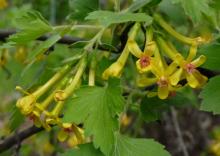 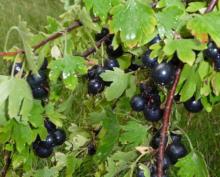 I'm enjoying this topic, such an interesting genus.  My first encounter with the genus was with an incredibly fragrant yellow flowered species (at the time, I had no idea its identity was R. odoratum), the flowers powerfully perfumed of cloves, on a beautifully formed bush.  So I grew the plant from NARGS seed, I believe from around year 2000.  The species must vary a lot, my plant is not nearly as attractive as the plant I had seen in a garden decades before, but not bad either, making a cloud of yellow flowers in early spring. The growth on my plant tends to be ungainly branched, leaves are smallish and sparse compared to better forms. But here's the clincher, I must have gotten Ribes odoratum ssp. inodorum f. blandum ;D  The flowers have absolutely no scent whatsoever!

So Rick, I'm intrigued by your cultivar 'Crandall' and must beg seed in the late summer; I'll glady cut down my inodorous form for one with clove-scented flowers.

Is anyone working on Ribes hybrids, I could imagine crosses between R. sanguineum that Julie showed us, and a fragrant yellow R. odoratum.

Stephen (Stevil), that's quite a list of Ribes there; I have one species coming along from your seed, although I lost most seedlings due to extreme levels of chipmunk tunneling in this particular area of the garden where I start seeds in situ. 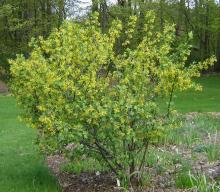 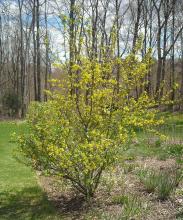 So Rick, I'm intrigued by your cultivar 'Crandall' and must beg seed in the late summer; I'll gladly cut down my inodorous form for one with clove-scented flowers.

I can do you one better, Mark: In spring, I can dig up a sucker, or at least some roots that should sprout readily.

An interesting thing about Ribes odoratum:-- The Missouri Botanical Garden site says it is dioecious, having male or female plants.http://www.missouribotanicalgarden.org/gardens-gardening/your-garden/pla...

-- The Flora of china lists flowers as bisexual. Considering they don't a have glossary of terms - not sure what that means.

-- The USDA site, lists it under R. aureum var. villosum and the fact sheet says it has perfect flowers.

--  Everywhere else, including the Flora of North America, has no inkling of flowers being dioecious.

Well Rick, that's a nice offer, and I glady take you up on the offer.  I wonder if mine could be wrongly named, perhaps another yellow-flowered species but with no scent?  The species R. odoratum has a number of synonyms, so maybe this is a species that is shrouded in confusion or has such variability to cause confusion... just conjecture, as I've not spent my time on researching the species.  Regarding the flowers being dioecious or bisexual, I've not been aware of such claims (again, I haven't researched the genus), I'll have to pay attention more closely.

I meant to include that I only have one R. odoratum, and there are no other Ribes spp. of any kind within at least a half mile, yet every year it fruits heavily with berries filled with seeds.  Since Ribes are supposedly not wind pollinated, this makes dioecious growth very improbable.

Stevil!  So you are who Stevil is. ;D  Stephen, I have had your GW exchange page bookmarked for years!  (Unfortunately, I mostly never remember to look at it when the time is right. :rolleyes:)

I'm honoured to have been bookmarked on your computer for so long! Let me know if you are interested in anything...

There was one that I unfortunately lost in the extreme winter last year that was kind of special - Ribes montigenum. I was at a conference in California and went hiking in the Sierra Nevada and collected a few seed. What made that plant special was that I will  never forget what day I collected those seed as it was (9/11 - 1) flying back to Norway the day after just a few hours before the attacks!

Hi Stephen:  Am wondering if, while you were in California, you came across Ribes lobbii.  Back in 2000 I found this plant with its fuchsia-like flowers and managed to collect a number of seeds.  Only last summer did I plant them and, after all that time, they germinated.  Have no idea how they will fare outside over winter, hopefully protected by a layer of leaves.  I understand they grow on Gabriola Island near Vancouver Island in B.C.  I do have R. odoratum, struck easily from a cutting a number of years ago and thriving, to put it mildly, ever since.  It needs severe cutting back every year but is a lovely, fragrant plant - makes nice cuttings for forcing at this time of year as well.  Not much berry production - the birds take most of them, making it difficult to get seeds.  Fran