I think that if barbatus shows up as a color other than red, it's most likely to have originated from a commercial selection, like 'Rondo', which might have 'Flathead Lake' as an ancestor. Penstemons rarely hybridize with each other, and I believe never in the garden, though lots of claims to the contrary have been made recently. Plants reported as garden hybrids most likely started out as a seed strain with the potential of displaying characteristics that appear to be the result of garden hybridization. Barbatus does have color variation in the wild, from red to sort of red to yellow to white; 'Schooley's Yellow' is a stabilized hybrid, I think, between several yellow-flowered forms. P. eatonii hybridizes with P. centranthifolius in California. (One specimen has been documented.)The only really documented case of large-scale hybridization is in Section Erianthera (Dasanthera) in the Sierra Nevada and Cascades.

Yes, that's absolutely right (... which is stating the painfully obvious, given that it's Bob Nold commenting on penstemons here!  :D)  I had 'Prairie Dusk' and possibly another hybrid of that type long ago, and the pink-to-purple, sharkshead types that seed around here must be the descendants.

Well, I wouldn't go that far. I just have a lot of documentation here.If garden hybrids were really as common as sometimes claimed, then they should be as common in the wild. But they aren't. Wilson and Valenzuela (Three naturally occurring Penstemon hybrids, Western North American Naturalist, 62 (1), 2002) found "only a few individuals of each type of hybrid among hundreds of parental individuals" [italics mine]. It doesn't make sense to suggest that a few plants in a garden could produce hybrids, unless those plants themselves were hybrids, say members of a seed strain, which a lot of penstemons in the trade are, ultimately tracing their ancestry to 'Flathead Lake' or something similar. The difference in anther dehiscence, timing, etc., would make the existence of garden hybrids from true species highly unlikely.

So the bottom line for me as a gardener would be, that seed collected in a garden from a known species is most likely to be the real thing. That hybrid offspring are rare.Did I get that correctly?

AND since I do have a hybrid between P. cobaea and P. hirsutus var. pygmaeus in my garden, one or both of the parent "species" is actually a hybrid, and not pure species. 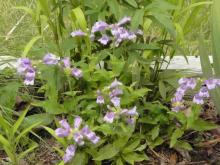 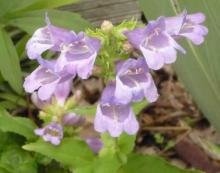 That's so COOL Rick!  I do believe that sometimes it is a matter of bringing things together, things that wouldn't necessarily have the opportunity to be together in the wild, but in garden settings, they can start intermingling in ways that defy common belief.  I have many examples with Allium where the native American A. cernuum and A. stellatum will interbreed with European and Asian species, creating all sorts of interesting "new plants".

So the bottom line for me as a gardener would be, that seed collected in a garden from a known species is most likely to be the real thing. That hybrid offspring are rare.Did I get that correctly?

Not precisely. There are plenty of plants labeled as true species in the trade that are the real thing. When plants are introduced into the garden that have, as their ancestor, a hybrid that may have been originally sold as a species, then the possibility for producing a lot of plants that could be described as "garden hybrids" is considerable. Hybrid offspring in the wild are rare, according to the documents I have. Penstemon species are often sympatric and show no evidence of crossing. Penstemon glaber var. alpinus, P. confertus, and P.whippleanus grow right next to each other on the road to the rock garden on Mt. Goliath, but no hybrids are evident.If penstemon hybrids are rare in the wild, but apparently common in gardens, that leads me to my next question .....

The next question being, and it's a rhetorical one, if penstemons don'y hybridize in the wild much, but do a lot in the garden, then the obvious conclusion is that the plants are happier in the garden.

I'm not sure there is such a direct correlation.  In the garden, where one can amass a number of species in a small area, species that would otherwise never have the opportunity to be growing together, then the possibility of hybridization increases many fold.  Each genus of plants then has its own genetic persuasion that might enable or inhibit hybridization.  I'm no expert on Penstemon, but bring together members of Dasanthera within close proximity and the behold the promiscuity.  I have heard that hybridization between sections of Penstemon are highly unlikely.  It contrast, it is interesting that in a huge genus such as Allium, where similarly there are distinct "sections" of the genus that are quite different and separate from each other, studies on the genus have concluded that species from disparate sections of the genus are actually more accepting of hybridization than closely allied species.  I mostly agree with this finding based on personal experience.