We hope this issue of IRG provides a diversion from the  disasters, natural and man-made that beset so many countries at the moment. The last while seems to have been filled with reports of fires, floods and more.

In IRG104 John and Anita Watson describe two new viola species from Chile; we learn a little about grant aid available to horticultural students  and  remember Rod and Rachel Saunders of Silverhill Seeds.

Reception for last month's cover image was good - so I chose another white  flower for this issue too!
Cover photo:  Blumenbachia prietea, photo ARF(Anita Flores Watson).

September’s IRG (International Rock Gardener) e-magazine  has  a double North American connection, as we review some of the plants in the Wappinger Falls garden of Anne Spiegel in New York State.  A trip further south takes us to South America, where Chilean based botanists John and Ana (Anita) Watson write of some Patagonian plants.

Some plants from Crete and more on the violas of South America are featured.  Thanks to main  contributors  Vlastimil Braun with  Zdenek Zvolanek, and to Anita and John Watson.

Remember - if you've got something you'd like to write about for this monthly e-magazine - why not send it to me ?
I'd be delighted to hear from you!   Send  submissions to  editor@internationalrockgardener.net

Jānis Rukšāns describes a new species of Anemone this month – named for Sergey Banketov. “Windflowers” - as these flowers are known in English - are a favourite for those who have the good fortune to see them in their native habitats & also because many species are readily available in commerce & make excellent garden plants.

John & Anita Watson give us an insight to the flora & fauna of South America and we are also delighted to introduce the new SRGC President, Julia Corden.

December  2018  IRG 108
This bumper  issue of IRG, posted online a little early to celebrate the season,  contains descriptions of three new plant species. Janis Rukšāns discusses Crocus of series Kotschyani and describes a new species, Crocus hatayensis from Turkey, Janis Rukšāns and Henrik Zetterlund define a new Eranthis species from Iran, and John Watson dedicates a new Viola species to a very special person!
We hope you find this an exciting way to conclude our ninth year of publication.

There's a good mix  in e-magazine International Rock Gardener - IRG109 - January 2019 - a garden and glasshouses in South West Scotland belonging to  Sue Simpson and George Watt; a description of a  Tulipa species from  Jānis Rukšāns;  a  review of   Holubec and  Horak's  book of the flowers of the Tian Shan by Martin Hajman and a look at a gem of the Cyclamen genus, originally written by Václav Jošt with  Zdenek Zvolanek.  Thanks to  'Folium Alpinum' of  NRV and ‘Skalničky’, the  Czech rock garden journal for their  cooperation with IRG

Lots happening in this month's  IRG e-magazine  from SRGC: a new viola species, Viola abbreviata, is described by John and AnitaFlores Watson, we see  winter-flowering  plants of  Gran Canaria  from  Iep & Gerrit Eijkelenboom and  some notes on the charming  hybrids of the succulent  species Aloinopsis and Nananthus from John Stireman in Utah.   There's also a review of Freda Cox' second edition of her Snowdrop book from grower, Anne Wright.

Cover image of IRG110 is  by John Stireman, of a hot pink Aloinopsis hybrid in his Utah garden .

Colin Moat is an English nurseryman who has been involved with the RHS Roundtable consideration of Epimedium for the Award of Garden Merit; the report on that is now published. Jānis Rukšāns, well known in these pages and elsewhere, as a bulb expert turns his attention to bulbous irises of the Hermodactyloides subgenus.  Patricia Becker is a keen gardener and galanthophile from New Jersey who introduces us to a sweet snowdrop which she has chosen to name for the well-known American snowdrop enthusiast, Ernie Cavallo.   Krzysztof Ciesielski lives in Żary, Poland and has a passion for nature that he follows not least as a relief from his busy worklife. He loves galanthus and enjoys seeing them in nature – in spite of various problems that beset his favourite sites. One of his introductions is  named for a Belgian friend, Wim Boens who has also been published in the IRG.

All copies  of  International Rock Gardener e-magazine  are  available  from tis  page  of the  SRG site  :  http://www.srgc.org.uk/logs/index.php?log=international

We welcomed two new authors to the IRG in  March 2019 . Dr Martin Sheader, a marine biologist from Southampton, is known with his wife Anna-Liisa for their great interest in all plants, particularly those from South America, as well as for their writing, talks and show exhibits. Martin writes about  an exploration of  Central Patagonia and  John Watson, friend and  sometimes co-author with the  Sheaders  describes an annual Cistanthe  species
Our second new author is Allan Robinson from Sutton Bridge in the Fenlands of England. His family were nurserymen in the past and he has a great interest in the geraniums and their relatives as can be seen from his copious contributions to the website of the Gerianaceae Group.

Colin Moat is an English nurseryman who has been involved with the RHS Roundtable consideration of Epimedium for the Award of Garden Merit; the report on that is now published. Jānis Rukšāns, well known in these pages and elsewhere, as a bulb expert turns his attention to bulbous irises of the Hermodactyloides subgenus.  Patricia Becker is a keen gardener and galanthophile from New Jersey who introduces us to a sweet snowdrop which she has chosen to name for the well-known American snowdrop enthusiast, Ernie Cavallo.   Krzysztof Ciesielski lives in Żary, Poland and has a passion for nature that he follows not least as a relief from his busy worklife. He loves galanthus and enjoys seeing them in nature – in spite of various problems that beset his favourite sites. One of his introductions is  named for a Belgian friend, Wim Boens who has also been published in the IRG.

Our presentation for  Maydemonstrates clearly the “international” flavour to which we aspire.  We begin with the description of an Argentinian natural hybrid viola from the English/Chilean duo, John Watson and Anita Flores Watson – which they have named for a mutual Dutch friend, Kees Jan van Zwienen.  Next up is an article from the Latvian bulb-master, Jānis Rukšāns and Dimitri Zubov from the Ukraine on naming a new bulb from Iran.   Frankie Wulleman, or ten years the  Editor of  the VRV, (Flemish Rock Garden Society) is  our  next  author - with a piece on another charming  South American plant – this  time  one  which is  already  present  in some  gardens – and Frankie  believes it is worth more of us trying to grow it. That is also the refrain of our last writer this month – that Austrian horticultural hero, Fritz Kummert – who enthuses about the “Blue broom” of Spain and Portugal.

June in the UK was  somewhat  cold  and  damp - in contrast to reports from  elsewhere  in Europe of temperatures in the mid- 30s C. Whatever the weather  in your part of the  globe we  can only hope for some degree of pleasure from your  plants! Articles begin this month with Janis Rukšāns who introduces a new  Fritillaria species from Uzbekistan, named for the mountain range where it was found.  Next we visit Somerset in the UK, where Paul Cumbleton and Colin Everett show the construction and development of a raised bed to accommodate a crevice garden. Canadian Grahame Ware writes about a Claytonia he favours and this issue rounds up with a report from Iep and Gerrit Eijkelenboom on the plants they have seen in Kefalonia and Ithaka in March and April this year.

Summer flowers are flourishing in the north while winter blooms make their appearance in the south – July is an interesting month. Many lovers of  alpine plants have  enjoyed  trips to see  plants  in habitat and  are even now  making  plans for their  next  adventure. For botanist/plant hunters like John and Anita Watson, such expeditions can lead to the discovery of new species – the exact status of which can sometimes take time to unravel!  Panayoti Kelaidis, that indefatigable power house of the Denver Botanic Garden, revisited Tibet and China in June – following on from his 2018 trip from where he shares with us some of the plants he encountered.  For those who, for whatever reason, are armchair travellers amongst us, such articles are a charm.  For those wishing to travel themselves to see plants in their homelands, such reports are also helpful. To conclude this month the IRG Team remembers Ron Beeston, a dear friend, recently lost to us.

Latvian bulb maven Jānis Rukšāns begins our e-magazine this month with a description of a new species of Puschkinia from Turkey. Fritz Kummert from Austria clarifies the naming of a plant which has long been mis-identified and Iep and Gerrit  Eijkelenboom from the Netherlands give us some inspiration for a trip to the Gargano peninsula in Italy in April where they found many orchids and other flowers in bloom. 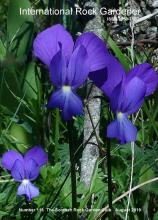