Cohan, is this its natural habit or is it caused by low levels of light?

Completely natural. These types often grow partly/shaded by shrubs etc so they do not need/want really full sun, though I keep them just back from south windows so they get some good sun, especially spring and fall. You can tell by the partly reddish colouring that it gets some sun.These taller species will grow upright for a while and eventually lean or fall over (unless they are propped up by shrubs) but this stem is probably near maximum height, and most growth now will go into offsets, which you can see starting..This particular form is also more gracile than some other forms, one of the numerous points of variation among these forms and similar species.

Interesting! The only Haworthias I have grown had no stem at all or very short ones.

Now that could make a very interesting (or at least, different) hanging basket in its old age.

How old is it?  With my inconsistent care, if I grew that plant I don't think it would be clothed to the base anymore. :(

So you've inspired me to take a few pics of some of my more usual houseplants.  You especially, Cohan, will recognize the hard life they endure.

This one you probably know of the top of your head.  It's fairly common but I don't remember the name. 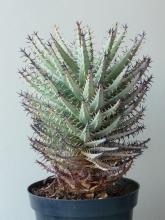 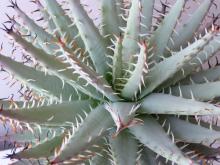 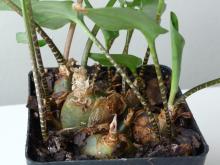 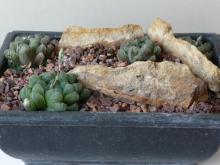 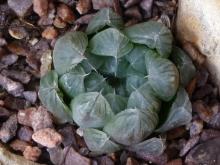 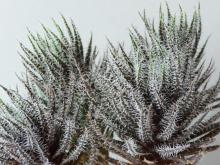 Sinningia leucotricha survives, dwarfed in a 2.5 inch pot.  But it still blooms two or three times a year. 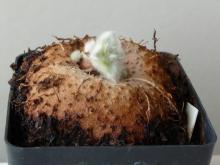 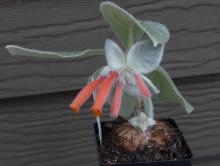 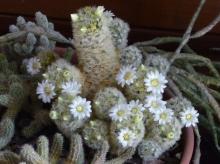 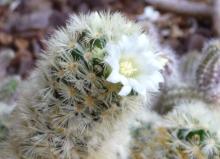 Trond- there are a number of  species of these columnar Haws, and many dozens (hundreds?) of variations among them.. coarctata, reiwnwardtii and herrei/ glauca would be among the most common, but not the only by any means..Rick- some nice examples- and mainly plants that look better for a tougher growing regime- while most c+s appreciate regular- even generous- water and ferts in season, if that were maintained year round most would not maintain characteristic growth! Mine tend to be grown a little harder than I intend, though I'm working on it!The Haw I pictured actually has probably had drought for the majority of the year in recent years, but these species are not much prone to losing lower leaves. while there are many stemmed Haworthias, there are few (if any?) that develop bare stems. lower leaves are not so commonly  lost in this type, as in Aloe,  and where they are lost, the plants mostly retract the stem to soil level so there are still no bare stems.. I'm not sure of its age-  it was potted before I left Toronto (2007), and into a 5" or so pot, so it  was likely at least several years old at that time- I probably bought it at a couple of inches tall in a 2/2.5" nursery pot.  You could grow them in  a hanging pot, though I don't think they'd hang far- probably more interesting would be some sort of basket/ball that the plants could send out offsets from in multiple directions- you could easily grow a sort of spikey ball that way- something I'd do for sure in a greenhouse, but hard to water in the house! I have a similar form quite a bit older/larger, planted in a hanging basket type pot (not hanging though) and at a similar stem length the stems mostly flopped over (maybe I'm wrong and they were never as tall),  but in the last couple of years the older stems have mostly died out and been replaced by a whole crop of younger stems, that may be due to some periods of inadequate water/ferts.. I'll have to look for some older pics of it..

Your first plant is certainly an Aloe species, though I can't say which- my first thought was that it reminded me of peglerae- though that does not get a tall stem (I'm not sure of the scale of your plant, either) and also reminds me ( the leaves) of humilis or longistyla, though those also do not form significant stems, and are very small- but maybe your plant is much larger than I'm thinking? and is a young tree aloe sp? Without knowing the species, I'd suggest it actually has excellent leaf retention for the stem length..

Funny that you just picture the petioles of the Drimiopsis- I have a number of SA bulbs who have pretty (and often similarly zebra striped) petioles as their best vegetative feature...lol

The one marked Haworthia sp is, I think, Aloe haworthioides, one of the Madagascar species, quite distinct among Aloes and very nicely grown. I've had this do well in the past, though my most recent plant died out. If you see flowers, it would be very clear whether it is Haw or Aloe.

Interesting that the Sininnigia has dwarfed so nicely.. I haven't got any of these silvery species for lack of space in the sun (lots of contenders for those spots) but maybe for a 2.5 " pot... Is if flowering now?

Your Mamm is putting on a good show :)

Thanks, Cohan.My first Aloe pictured is 9 inches (23cm) tall in a 6 inch (15cm) pot.  It was actually replanted 2 inches (5cm) deeper than before.  When I think of what subshrub stems are like outside, I would characterize this one as non-woody, but very strong, if that makes any sense.

Oh yes, Aloe haworthioides and not Haworthia sp.  The name definitely rang a bell as I read your post.  Thank you.

At the moment the Sinningia is just resprouting.  The first pic was taken yesterday.For many years, I grew a simple Mirabilis jalapa as a "caudiciform", and it performed in the same manner in a 4 inch (10cm) pot.

There are a bazillion Aloes, and I am certainly no expert, so I still wont hazard a guess on your first plant, but it's a nice one :)

I shouldn't be surprised about caudis or other plants  dwarfing in pots- I have enough forced dwarves  ;D

Here's one that doesn't need any help to stay small- from seed in 2008 from Penrock as Rhadamanthus sp, now Drimia, this is probably D platyphylla, and there are 4 of them with plenty of room in a 3 inch pot. This one is the first to flower- tiny one day flowers, but very nice in macro! 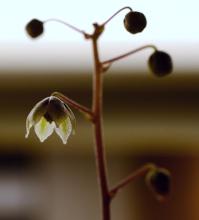 Thanks, Fermi- they are sweet little things, though I'm really glad I remembered to get some macro shots- the flowers don't last long and don't look like anything more than little specks without the magnification!...lol It has also been trouble free on the windowsill- just water whenever I remember except mid- summer and mid-winter..lol