Gary A. Monroe has kindly given consent, for us to use a series of photos he has produced. These fine  photos depict the parts of an Eriogonum pedicel. This series will show details from four species.

I wish to thank Gary personally for so kindly offering these to us. 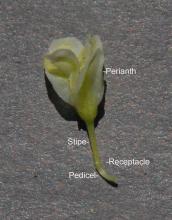 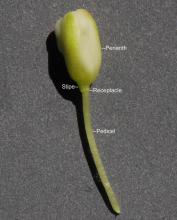 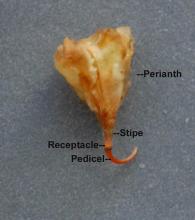 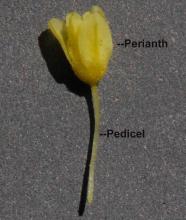 Thanks John, very interesting, but for me it both answers some questions and raises new ones.  In the second photo, showing an Eriogonum robustum flower, how is it that the part identified as a stipe, is a stipe?  It looks just like either the somewhat narrowed base of the perianth, or at best, the receptacle itself.  Is there a physical delineation of cells or tissues separating the stipe in this instance, a joint which would separate or dehisce at a line or point of separation?

In the context of what these 4 photos show, does a stipe, when present, ALWAYS have a part called the "receptacle" at the point of juncture with the pedicel?  In the first photo (Eriogonum heracleoides var. heracleoides), why isn't the narrowed base of that perianth also considered a stipe and receptacle; maybe because there can't be more than one such pair per perianth?  This is all pretty subtle stuff!

For me, I am still trying to understand the precise definition of a stipe in the context of Eriogonum.  But these types of illustrations are exactly what is needed, thanks for posting them.

There is no physical delineation between the stipe and the perianth. The stipe is the cylindrical extention of the perianth base. (A supporting stem as you would find in say a wine glass. ) The tissues of the stipe are the same as the perianth. As you have noted they may appear barely noticeable as in E. robusta or easy to see as in E. heracleoides. To answer your question about why the narrow base of E. heracleoides is not considered a part of the stipe. The stipe portion of the perianth is always the same diameter as the pedicel (or very close to it).

I know this is a little murky. It still is for me too some times.

I hope this helps a little.

Thanks for all the stipe vs. pedicel info... it becomes very clear that this is not the type of detail that is likely to be captured by casual photos!

So, revisiting where we started some time ago... (discounting the fall colour in one photo) are these not actually the same plant? Here is a side-by-side comparison of one of Cohan's photos (left) with one of mine (right): 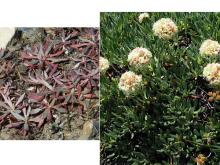 I can't speculate Lori, goodness knows I already misinterpreted much of the technical info, so I will confidently rely on Dr. Reveal's ID diagnosis.  But I think it has to do with those extremely subtle stipe characteristics that I've made such a mess of :), as well as some of the foliar characteristics.

But the stipes/pedicels aren't visible on any of the photos I posted...

But the stipes/pedicels aren't visible on any of the photos I posted...

He must more than we know... I still trust his judgment.  I think he may be going on differences in the leaf characteristics.

Remember the uncertainty raised by Dr. Reveal's response which made it unclear as to whether he was commenting on the distribution of E. ovalifolium subspecies in Alberta, or whether he was actually referring to the ID of the plants I posted?

What do you see as the major foliage differences between the plants in the side-by-side comparison... ?