Congratulations and welcome Lis ... a beautiful photo to open with.

Sorry to be late in replying, have my nose to the grindstone working on some deadlines.

Lori, I'd say your gentian is indeed G. clausa.

Lis and Todd, nice photos showing Gentiana andrewsii for comparison, the little slightly "protruding fringe" is the key identifier.  I found the following web site giving more specific information about how to tell them apart; the connecting membrane on andrewsii have tiny teeth (protruding) whereas in G. clausa the membrane has rounded lobes (not protruding).Gentiana andrewsii - Natural Heritage Endangered Species Program, State Status in Massachusetts: Threatenedhttp://www.mass.gov/dfwele/dfw/nhesp/species_info/nhfacts/gentiana_andre...

Lis and Todd, I also find it interesting, or curious, how both G. clausa and andrewsii, are missing from the more eastward Canadian provinces (New Brunswick, Nova Scotia, PEI, and Newfoundland), and in the case of G. andrewsii, also missing from Maine.http://plants.usda.gov/java/profile?symbol=GEAN

So, I took a little drive down to the Nashua River today, about 1-1/2 miles away, to drop off a squirrel to new environs ;), and lo an behold, there were bottle gentians near the boat launch area... never noticed them before.  There were mostly going over, shading to a dark purple, but a few plants still had fresh flowers of a good blue.  Only G. clausa and andrewsii are possible here, and checking them through the key identifiers, I have concluded they are G. clausa.  I was hoping they might be G. andrewsii, a species that is Threatened Status in Massachusetts, one that I have never seen in this State.  Their were lots of plump seed pods, and because G. clausa is not on any watch list, I can collect some later. 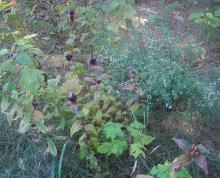 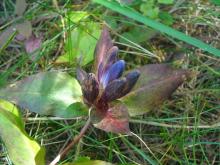 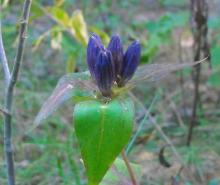 We have no true gentians in Newfoundland although Gentiana nivalis does occur in northern Labrador.  We do have Gentianopsis detonsa and Gentianella amarella and G. propinqua...unfortunately they are annual-biennial and very difficult in cultivation.  Here is Gentianopsis detosa ssp. nesophila. 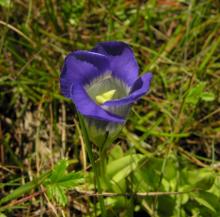 My bottle gentians (G. clausa), in both the white and purple-blue forms, are budding up getting ready to bloom. Just as a test, last autumn I sowed a flat with seed collected from my G. clausa alba, and they came up thickly this spring.  Here's a view of the seed flat back in mid July 2011. 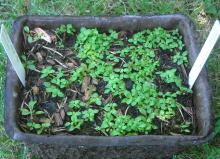 And not only germination - but you have managed to grow the seedlings afterwards!I have often gotten good germination with Gentian seed but always failed in growing them on. Two years ago I sowed G purpurea seed in situ and now I have several small plants ;D

Some aspects of my white Gentiana clausa this season.  The plant has grown vigorously, and each stem produced multiple whorls (2-3) of bloom (verticillasters, a type of fascicle).  Difficult to photograph well with my phone-camera, the color is fairly true except the ones showing a bluish cast (there is no blue, just pure white with the apex a yellowish green).  I must say, I like the white form better than the purple blue ones. 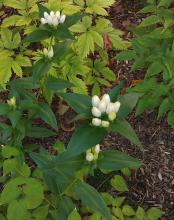 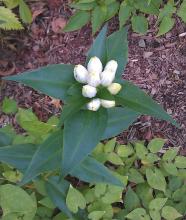 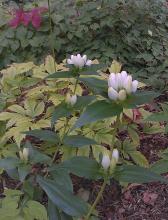 They look great Mark! I have had a preference for blue gentians but in this dull weather we have had for weeks now I realize white flowers do a better show!Disappointingly slugs like the bottles .. I mean the flowers too :(

Trond, here's a couple of blue bottle gentions, Gentiana clausa on the left photographed today in my garden, a seedling collected at a boat-launch along the Nashua River, it flowered this year while still quite small, at about 6" tall.  The second photo is from The Garden In The Woods (display garden of the New England Wildflower Society), which I thought to be G. clausa, is most likely G. saponaria with tall reclining stems about 2' long. 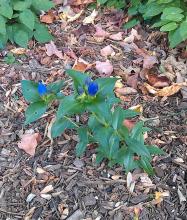 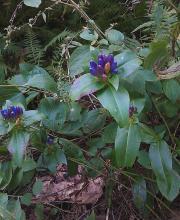 Thanks, Mark. Is yours a different blue or is it just the picture? If G clausa gets 2' tall then it isn't easily swamped by neighbours - maybe a plant worth trying here!