I thought there may have been a thread started for this genus, but I couldn't find it, if so, so here goes...

Antennaria are starting to bloom here... the group includes many great groundcover plants, with neat foliage, and some (reasonably  ;)) showy flowers among them, too.

Antennaria umbrinella (or so my map claims, at any rate.  ;D) 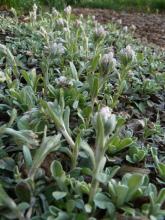 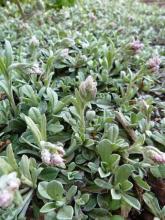 We used to have 12 species of Antennaria in Newfoundland...now they are combined into just 5, bucking the trend of splitting rather than lumping.  All of ours have rather drab flowers....A. alpina is our nicest for tight form and most silver foliage.  I rather like some of the western pink ones.

I haven't noticed this thread till now - thanks to Todd ;)

This is the best colours I have found here - all the same species Antennaria dioica! 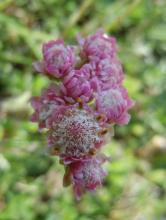 Strangely we have native A. rosea which is pink out west but off-white in Newfoundland!

We get some coloured ones here, but nothing as bright as Trond's.. Lori, there was a good stretch of earlier posts on the genus, in a thread about red flowers, I think....

Cohan, I've moved most of the discussion about Antennaria that was in Plants and Gardens/General Alpines/Don't Forget the Red Ones! over to this thread.  There are still some posts about Antennaria there (it would have seemed disruptive to the rest of the thread to move them all) but all references to Antennaria can be found at any time by going to the main forum screen and doing a search.  :)

I haven't got down to ID'ing many Antennaria species yet, but here are a couple of nice alpine ones.  Any guesses?  The flowers are not colourful but the foliage is noteworthy, particularly on the second one which is quite gorgeous: 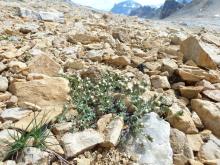 Here's a tiny grassland species (with my gloved finger for scale): 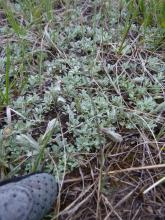 Wow Lori, the second one would grace any garden or the foliage class at any alpine show. Stunning.

Having done some reading at the Eflora of North America on the genus, its seems pretty tricky for many species, and a lot of the common silver leafed ones (at lower elevations at least, seems maybe some of the alpine ones are more distinct?) seem to get tossed around among several species... I think id will involve measuring the flower heads, checking for colour of bracts on outside of flowers, and in some cases looking for a 'tag' if I'm recalling the word they used, on leaf tips...I think I finally decided on one of the upright species, but still not 100% sure!I thought some readers might enjoy following my process of identification---

This colony is just a few miles from me, It seems to be an occasional species around here, not super common like the mat forming types (I have a plant growing from a cutting taken at another site several miles the other direction from me, will have to look at it in flower and see if it's the same). I had id'd this plant as Antennaria pulcherrima, based in part on the habitat type (moist areas, both sites I've seen it here, and some plants seen in the montane zone were also in a wet/seasonally wet place; I'm not sure these habitat constraints always apply in my immediate area, since we don't have any really dry grassy areas, and I think grazing, clearing etc may skew habitat opportunities ), as described in Eflora of North America, vs the similar A anaphaloides, said to favour dry sites....

However, as I started studying the details and maps in the Flora of Alberta, I was unsure- anapholoides seemed more likely to be in my area by the maps, and both talked about dark dots at the base of bracts (anaphaloides), and or dark bracts in general (pulcherrima).. the bracts on the flowers I photographed are more like tan, with dark dots only visible on some flower heads..However, I finally decided anaphaloides should have whiter bracts , and likely shorter heads (involucres), and Eflora describes bracts for pulcherrima as ' black, brown, castaneous, or olivaceous' which should -sort of - cover the light but not white bracts on my plants; further, bract apices should be acute for pulcherrima and obtuse for anaphaloides-- so it comes down to the bracts- scales if you like, on the outside of the flower heads- these 'scales'/bracts should be mostly white with blunt or rounded tips for anaphaloides, and they should be darker and pointy for pulcherrima!

Antennaria anaphaloides:http://em.ca/garden/native/nat_Antennaria_anaphaloides.htmlAntennaria pulcherrima:http://em.ca/garden/native/nat_Antennaria%20pulcherrima.htmlnote: there are also male or female flower heads on these plants, and I think Antennaria flowers change in appearance quite a bit as they mature, so the flowers in my photos do not resemble either of these much, but just focus on the key features outlined above  ;D

A couple of views, at the edge of a hayfield, right by the fence/roadside, moist/seasonally moist, depending on the year; July 27, 2010 Some closer views of the flower heads, starting with a fuzzy crop, in which you can see the dark spots at the base of the bracts, only occasional.. 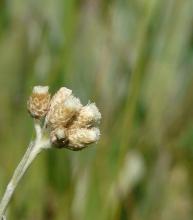 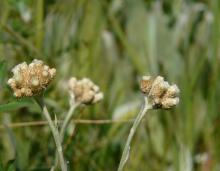 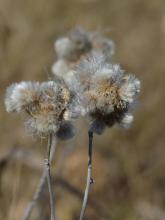 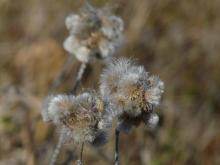 Happy to hear any confirmation or any indication of where I might have gone wrong with this!

This one was from Hilda Ridge- below the treeline, but not by much, on an exposed edge of the ridge with no trees nearby...May 31, 2011, when growth would have just barely, if at all, begun for the season.. 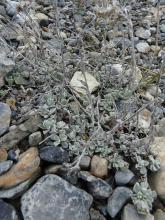