A few umbels flowering in our garden at the moment. Athamanta turbith grows on a raised bed along with Lomatium columbianum, and still stands as my favourite of the family in the garden. I think of it as like a symphony of green and white; simple but very beautiful. Later the small seeds are silvery-grey and attractive in themselves. I was introduced to it at the Chelsea Physic Garden in London, where I often went to sell plants.

The second, Laserpitium siler, came on the recommendation of a Landscape Architect friend from Belgium, who used it in his planting schemes. It is a tough plant, used to the severe cold of northern and central Europe, slow to establish but very perennial, and with rather distinctive open heads of flowers and greyish foliage.

Thirdly, probably one of the best plant introductions of recent years, Anthriscus sylvestris 'Ravenswing', the black-leaved cow parsley (or Queen Anne's Lace). This self-sows under the apple trees with others such as Aquilegias and Brunnera, and they make a fine picture at the moment, even in one of the driest springs we have had for years. 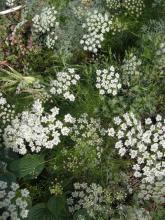 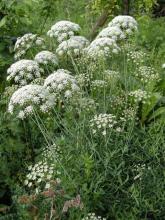 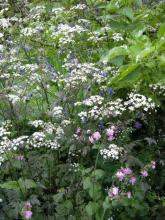 All nice, the last combination especially :)I have some Raven's Wing seedlings, looking forward to seeing them grow up :) You don't find the Brunnera too vigorous in its selfsowing? a gardener in Manitoba was recently telling a tale of woe regarding all-green leafed seedlings of an expired B 'Jack Frost'....

Amazing scenes, Tim!  You have a fabulous garden!  :o

Mmmm, Lomatium - another genus to try! Thanks for opening our eyes to that one, John!

Cohan, Brunnera macrophylla self sows in moderation here... enough to start giving some seedlings away after a few years.  It's hard to imagine that anyone would find its relatively modest habit excessive though (if I'm interpreting your comment correctly), in comparison to the truly rampant seeding of so many other species!

Cohan, Brunnera macrophylla self sows in moderation here... enough to start giving some seedlings away after a few years.  It's hard to imagine that anyone would find its relatively modest habit excessive though (if I'm interpreting your comment correctly), in comparison to the truly rampant seeding of so many other species!

Good to know, Lori, I haven't grown them, but sort of admired some of the variegated types, at least; -- the person in Manitoba was giving a warning (coldzone yahoo group, mostly western Canadian members) that this plant must be deadheaded if you were going to grow it at all, or planted by itself far from anything else! I think part of the problem was that the variegated parent died, leaving only green seedlings, and they were coming up in the middle of some more valued plants...lol

Well, that seems like a very extreme view, based on what I've seen, and on never having heard a similar complaint.  ???

That's good, Lori, since I was kind of thinking about it--if I run across a cheap plant somewhere..lol

Off topic but...Cohan, if you ever have a reason to visit Calgary, you should let me know in advance... Having a mature perennial garden (that is in a constant state of flux due to needing more alpine beds!), I have many plants that I'd be happy to share!  I tend not to divide many things, but I have lots of seedlings, offsets, etc., often blooming-size plants, that I pot up to give away.

Thanks, Lori, I'll let you know if we are going that way and my driver is amenable to a stop...lol

Re. Brunnera. With me this self-sows hugely and seems to grow as well in full sun as shade. Because I have so many seedlings I have decided to use it as ground cover under our rows of fruit trees - but we have a big garden of around 1 and 1/2 acres.

I neglected to say that Anthriscus sylvestris 'Ravenswing' was discovered and introduced by Prof. John Richards of Primula fame. If a nurseryman had found it they could have made a fortune!

Here's Shoshonea pulvinata in a trough, wintered over from last year - a tiny thing at present.   I've only seen it in photos... I expect the flower stems will elongate, unless this is some particularly dwarfish form??  I got it from Beaver Creek, at last year's CRAGS spring plant sale. 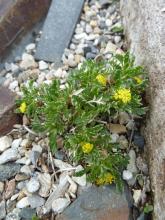