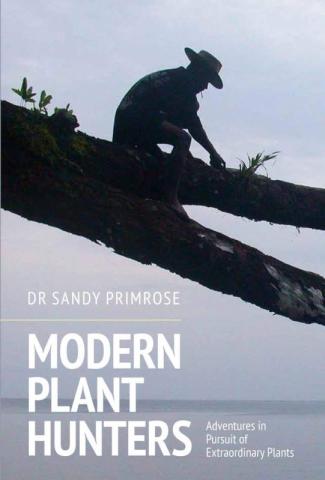 It was good to see familiar names, such as Roy Lancaster (England), Mikinori Ogisu (Japan), Sue and Bleddyn Wynn-Jones (Wales) Dan Hinkley (U.S.) and Kenneth Cox (Scotland), John Wood (England), and the major contributions they have made over several decades of introducing new plants. Less known are the intrepid orchid hunters (and there are several profiled by Primrose), such as Tom Hart-Dyke (U.K.), who was kidnapped by revolutionary guerillas in Colombia and held captive for nine months in 2000.

While independent plant hunters are profiled, contributions by botanists at Missouri Botanical Garden, Kew Gardens, the Royal Botanic Garden at Edinburgh, and other scientific institutions are covered. New to me was the “rebel plant hunter,” Michael Wickenden of Scotland and his sad end in 2016, dying of pulmonary edema in Myanmar, while on his eighteenth plant hunting expedition.

Primrose writes that more plants have been introduced in the past thirty years than ever before. Thus, the timeliness to identify some of the current major plant explorers and the international issues they face in bringing new plants to our gardens, homes and for diverse uses.

Bobby Ward is currently the NARGS Executive Secretary, a past president of NARGS, and author of several books including “The Plant Hunter’s Garden: the New Explorers and Their Discoveries”